Admin Edit: Due to maintenance, there will be a brief outage between 12:05AM Dec 7 going to the early hours of the morning (about 6AM).

After a busy Friday & Saturday preparing for an AVI L2 classroom session to be delivered this past Sunday, I was desperate to get out and check the impact of the 3-day Early December prolific storm.

It was disappointing to drive through Mores Creek Summit and see very little snow at the pass. Reports from friends that skied Pilot Peak last Saturday were favorable. Similar to a week ago, hiking up the road for some distance is necessary to get off the dirt and into snow deep enough for skinning. The best skiing is at the top 500 feet of Pilot Peak.

The drive up the canyon on I21 revealed shallow snow coverage, until just prior to Banner Summit (7000 feet), where the snowpack showed very distinctive rain runlets!

Once we got closer to Copper Mountain, snow amounts rapidly increased. From the base of Copper up to 7500 feet there was a burly rain crust below a variable layer of 10-15 cm of low density snow. Above 7500 the rain crust vanished, and the snow started to feel really good!
The morning started somewhat cold (-8 Deg-C) with light winds, stayed at - 5 Deg C for most of the day, but warmed to -3 deg-C late in the afternoon. Changes to the snowpack were noticed thorough-out the day due to settlement. Trail breaking was a chore for most of the day, but as the snow proceeded to settle it became increasingly easier.

Snow pits at 8200 and 8400 feet, at the top of Copper's west open slopes, produced moderate CT results (CTMQ2). No indication of propagation propensity was found (ECTN) at the snowpit locations. Weak layers reactive to CT testing were identified at 45 cm and 60 cm, with sluggish sudden planar scores that could have been classify Q3. CT were repeated 3 times, and with one showing a clear Q2 score. Both weak layers were composed of stellar/dendrite precipitation crystals in the 1 mm size range. It is reasonable to expect that those two weak layers will bond within the next 48 hour.

Below two videos. The first for the a compression test (CT), and the second for a loaded CT. The concept behind the loaded column test is to simulate the effect of loading.

Next the loaded CT test.

The effect of wind loading as well as wind scouring was evident at the 8600 feet level. We treated with respect west slopes above 8000 feet that were loaded mid slope,  as well as slopes that experienced wind scoured at their starting zones.

A BIG concern as we ski toured, was a slope at the 8650 feet that was sufficiently wind scoured to expose rock (where usually we see none) right at the convexity in a starting zone - it did NOT inspire confidence at all!. We assumed that this could be a thin spots with the potential of a higher likelihood of triggering a slide at the deeply buried basal facets or buried parlor of facet/surface hoar crystals observed a week ago. In addition, we avoided slopes with angles above 35 degrees considering the spatial variability (wind effect  and early season) as well as significant precipitation event during the last 72 hours.

The coverage at Copper is fabulous, there is snow everywhere! The snowpack depth at the 8400-8600 feet level was 1.5 meters.

During the day we travelled and skied slopes with the most fluffy snow or that were minimally impacted by the strong winds from the last storm ... and the skiing was phenomenal! At the end of the day, in lower angle terrain, I filmed Eric enjoying himself.


Today was a superb day, and I was pleased not to be skiing in my rock boards, and instead with my pow tools. It has been a long time, since the last time I skied conditions this good the first week of December.

One more cool observation - we noticed below the 7000 feet level downhill from Banner Summit's avalanche gates, two small road cut slopes where tree fall appeared to have triggered small slides ... but we are not certain. This might be a good time to REMIND readers NOT to park between the avalanche gates! Public parking is NOT allowed between between the Granjean and Banner Summit section of Idaho-21. 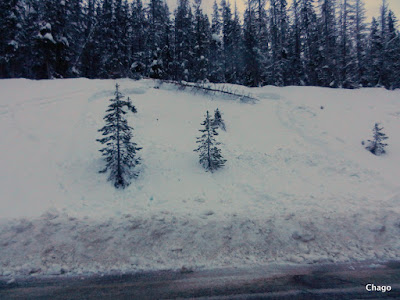 Next is an addition to the post after it was originally posted Monday night 12/3.

A good friend, Evan, shared the next update and pictures from Pilot Peak from last Sunday - December 2nd:

Thought I would share some things we saw at pilots. Most aspects were devastated by wind and what seemed to be a rain event. North facing aspects were more so very wind loaded without the super hard crust. Lots of natural activity occurring on east and north slopes. With a weak layer releasing around 30 cm down from what I guess to be a combo of wind loading and warming. Great day of touring and recon.