My plan today was to take a friend to the backcountry in order to FORCE him to clear his mind from work, marriage, and life stresses. Alan was not feeling good this morning and stayed home. Thus I pretended that I was in urgent need of "backcountry touring" therapy.
.
The skiing was FUN. The warm days and cold nights have resulted in a thick layer of facets capped by surface hoar, the result of "Diurnal Recrystallization" at most aspects above 6500 feet. The only exception are SE, S, and SW aspects. But the good news is that those aspects are fabulous corn below 7000 feet!
.
Next, a picture taken from the easternmost ridge above Clear Creek. Deer Point can be seen in the center. As you can see, there is plenty of mellow terrain to lay tracks! For a topo map of the Clear Creek area to the SE of Bogus Basin Ski resort, please check the April 7th, 2008 posting on this blog,
. 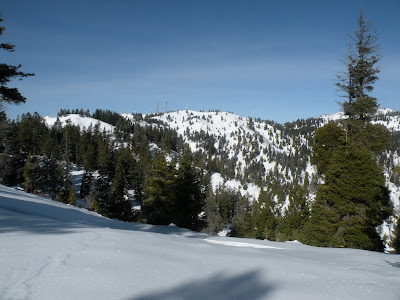 .
The next picture shows the "rocky" knob to the left in the above picture. The start of this run (notice the tracks) had some of the funnest and best recrystallized snow. To the left of my tracks, a snowmobile track, there were some in the area today.
. 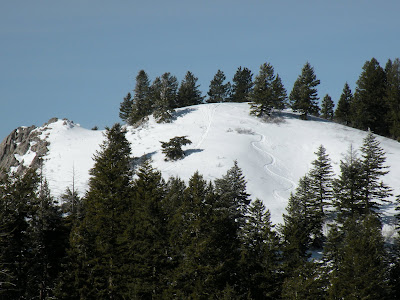 .
Another view of Clear Creek drainage with Shafer Butte (top of Bogus Basin) to the right.
. 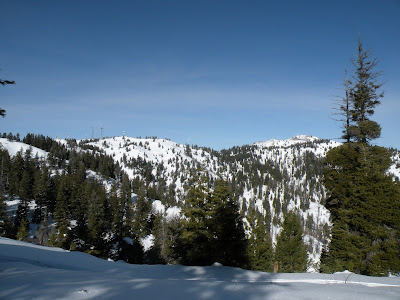 .
The surface hoar was widespread. If the surface hoar crystals are not destroyed by weather, the next snow deposition event very likely will result in widespread instability. Particularly when the surface hoar will be sandwiched with a slab above (new snow), an efficient shear plane (thin translucent melt freeze layer), and another layer of facets (near surface facets) immediately below the surface hoar.
. 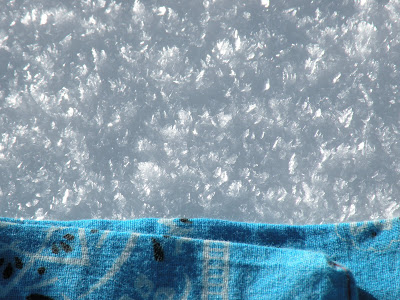 .
The next two pictures show the melt freeze layer below the surface facets.
. 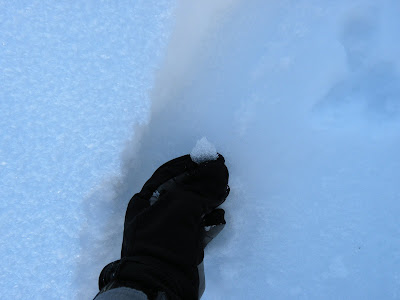 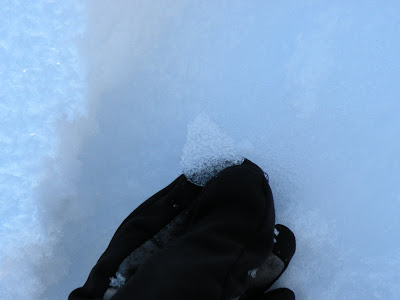 .
Below this thin "translucent"crust layer, there were two additional crust layers, with the 3rd and deepest crust undermined by 5 cm of advanced facets. This layer was present last Tuesday at Winter Corner (Mores Creek Summit Area) too, and it was located at the same depth of 25 cm. The snowpack depth at Clear creek has an average of 1.1 meters in depth, and besides the top 30 cm of crust and facets from West through East aspects the rest of the snowpack is solid with a uniform layer of round crystals.
. 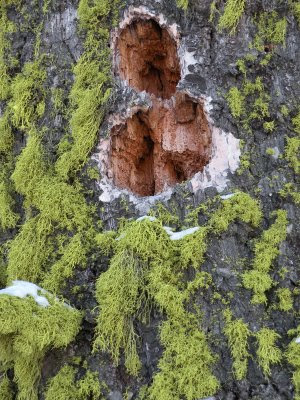 .
The above picture seems out of place, but there are many cool snags and Ponderosa trees at Clear Creek.
.
Around 2:30 PM, the sun was at the PERFECT position to head over to the south side, to the slopes above Dry Creek drainage, and participate in the corn harvest. The snow cover was thin at places, but the corn was perfect. Below two pictures of the area I toured south of Deer Point.
. 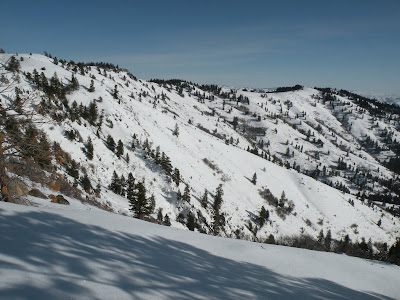 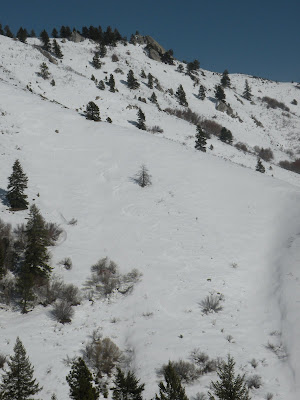 .
If you look carefully, you might be able to see my tracks in the second picture. Next time I will make sure I have a companion - so that I can get video clips. Pictures of ski tracks are not very compelling!
.
I snapped the next picture, climbing back to Deer Point. Doe point is in the middle. A couple was skiing Doe Point today as I climbed out of my last ski run. Once more, the inversion is coming back to the Treasure Valley.
. 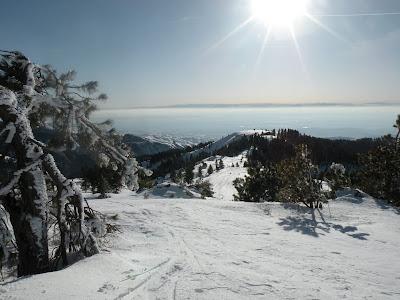 .
Get OUT and explore new areas. The skiing is good, and the snow conditions are allowing for ambitious touring. A lot of ground can be cover very efficiently.
.
Chago
Posted by Chago Rodriguez at 7:36 PM

My last posting was 3 weeks ago. My guilt is GREATLY alleviated knowing that after the weather event of January 4 through January 6th (warm temps, rain, and wet snow), and subsequent 2 weeks of high pressure and spring temps at high elevations allowing the snowpack to stabilize fast and decisively. I am certain that we can agree that there was very little I could have contributed to the backcountry community in terms of ski or snowpack conditions information during the last two weeks.

I had a great time backcountry skiing the Northern (McCully Basin) and Southern Wallowa (Norway Basin) mountains in Oregon for two long weeks. The snowpack conditions in the Wallowas were similar to SW Idaho (Wallowa Alpine Huts are ONLY 30 air miles from Idaho's West Central Mountains in McCall/Cascade). My first week in The Wallowas I taught a Avalanche Level I class ( 1 day classroom with 4 Day field session). For those interested you can get the class material at:

Below you will find links to pictures I snapped for two other trips I did after the 5 day Avi class :

Today I visited the Mores Creek Summit area with my friend Mike L. Since we were limited on time we decided to tour the Winter Corner area. We skied first the G-string runs to the East of Winter Corner Summit ridge (please refer to topo maps posted January 2nd) . On our way back we skied the most northerly central ridge line. Check the next two videos from today's skiing:

All I need to say is that skiing was gratifying!

A quick look into the snowpack confirmed my assumption (based on the MANY holes I digged in the Wallowas) that the snowpack is SOLID. However, the cool temps of the last two days have metamorphosed the new snow (10-20 cm) into facets. And these facets are skiing very NICE!

In the N and NE exposures we skied, the snow surface facets were above a fragile melt-freeze layer. I also noticed a hard crust 25 cm below the snow surface with with a 3-4 cm layer of well developed facets below the crust. These two facets layers deserve to be monitored as we get back on track into winter and snow deposition resumes!

I did not have time to poke around and get a sense of spatial distribution of this two facet layers, but during my next visit this weekend I will try to get a picture of these weak layers distribution at various aspects and elevations. Stay tuned!

And remember I am looking for authors for the 'SISTER' blog to this site. We need contributors to share ski conditions as well as snow obs. Please check the FANTASTIC blogging taking place at:

Chago
Posted by Chago Rodriguez at 12:40 AM

First I want to apologize to those that attempted to get a magnified view of the Mores Creek Summit topo map. I received feedback from 3 individuals, meaning there had to be a lot more with this problem. I was unable to determine what was wrong with the posting, and even loaded the jpg file again to no avail.

Assuming this is valuable information for some, I will err on the safe side AND include on this post 3 topographical maps for the Mores Creek Summit area.

The map below was posted few days ago, and it shows the uptrack and most popular ski runs. 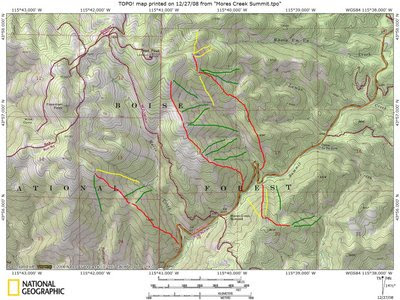 The next topo map is for the winter corner area (NE Sunset Peak). 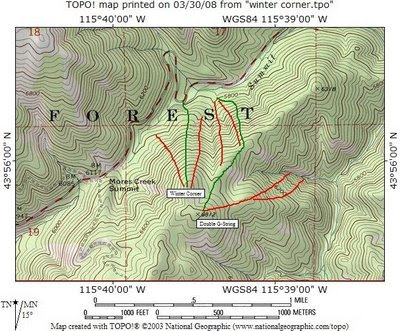 The map below was posted last year. A year ago I attempted to get a the backcountry community creative juices flowing. The goal was to get cool names for ski runs at Pilot, Freeman, and Winter Corner. I pick some names, admittedly HORRIBLE!, but it was a start. 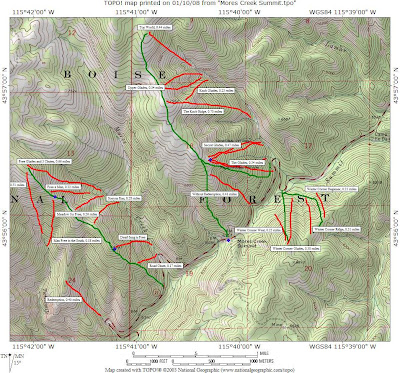 Maybe this time we will get cool suggestions for ski run names.
Have a nice Friday evening! Maybe I will get to see some of you tomorrow at Mores Creek Summit area.

Before saying ADIOS, I need to ask again for a BIG favor. Next week the ski hut guiding season starts, and I will be out of the area two weekends a month. I created another blog that allows MULTIPLE authors. The blog is listed at the "top right hand side". PLEASE - PLEASE - PLEASE - consider becoming an author, and contribute to the community by posting ski quality (or lack of it!) conditions, avalanche observations, or any other topic you think is important.