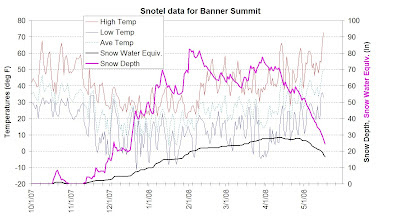 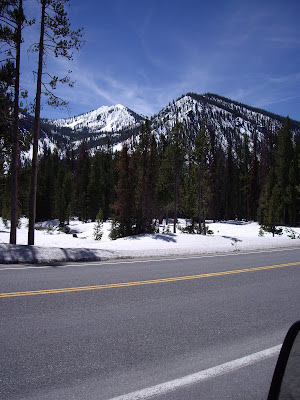 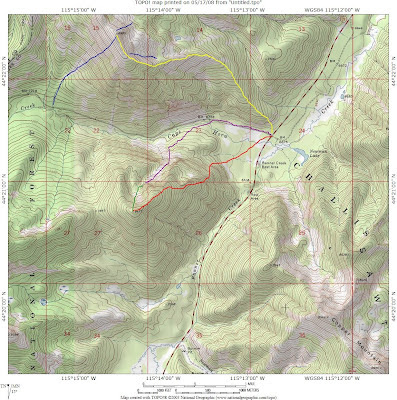 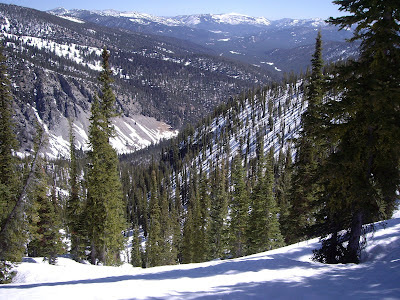 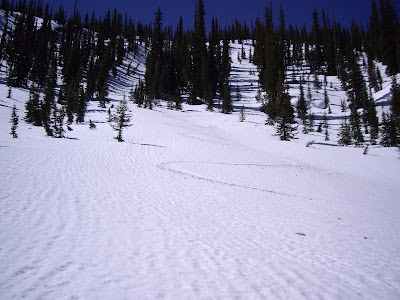 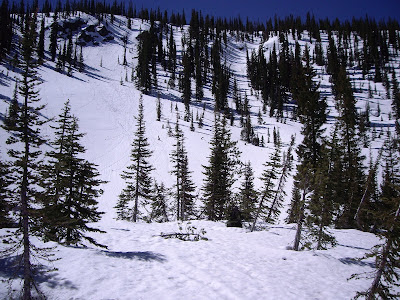 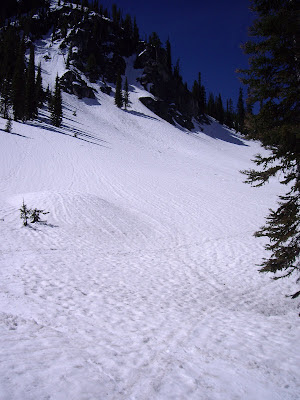 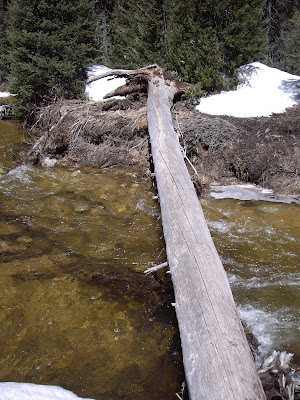 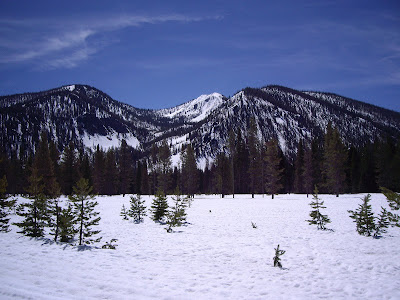 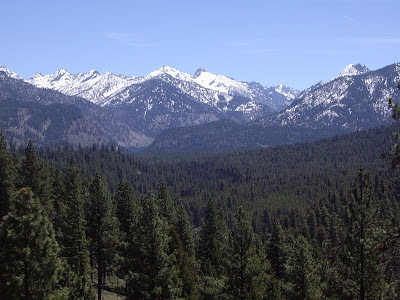 Spring skiing Saturday May 10th at Banner Summit was delightful! And again, the weather was perfect - clear skies with light cool winds - and a fantastic ski partner to share memorable turns.
It is worthwhile to mention that if you do not want to boot-up or get into scary situations during skinning-up, I strongly recommend that you get ski-crampons. Saturday touring conditions required the use of ski crampons ALL day due to the firm conditions resulting from a solid overnight freeze. And even later on the day, the corn sat in top of a very hard layer of melt freeze snow.
This spring I have been carefully monitoring the weather and temperatures to be able to ski the days with the BEST overnight freeze. That allows for longer spring skiing days, provides better skiing conditions (no slush!), and minimizes snow instability (wet slides). Notice the temperatures for May 8th and May 1oth. The touring and skiing were superb due to the GOOD freeze on the nights preceding those two days. As usual - on this blog you may "click" the images (pics and charts) to get the full file along with details, and higher magnification. 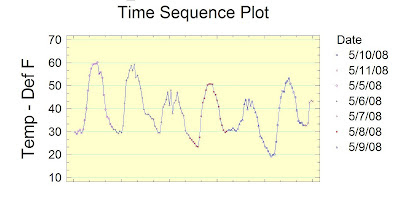 -
This Saturday, we accessed Copper from the North-west. This is not a popular approach, but it is a nice change of pace, and on stable conditions (such as spring) it provides access to elegant steep lines, such as the North chutes about 150 feet below Copper's summit to the NNW. This picture is a small sample of these outstanding lines.
- 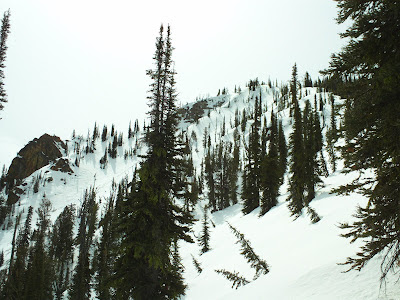 -
For your reference I include on this post a topo map of Copper Mountain area. This topo map version is different from last week's blog posting. This map version shows more terrain to the north. The red lines indicate the climbing route we used Saturday. In blue is the standard and most popular climbing route used to access Copper Mountain. The green lines corresponds to the slopes we skied this Saturday. 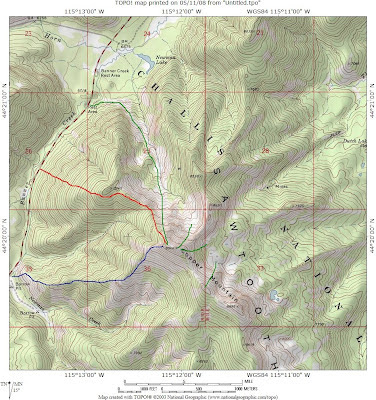 -
The day was surprisingly cool for mid-May, and the snow started to corn-up late - well pass 1 PM on east aspects.
Considering the steep lines we intended to ski, during the morning climb we checked the snowpack above the 8000-feet level at the head of the chutes There was a 30 cm melt-freeze layer solidly bridging the north aspects. Below this layer the snowpack above 8000 feet at N, NE, and NW aspects continues to have a winter structure, and it is not experiencing any significant melting. Therefore, above 8000 feet we still have a SNOW wonderland!
Be mindful of conditions that could weaken the thick melt-freeze bridging layer. If this bridging layer is weakened due to rain, or a combination of a warm day and a night without a freeze - it is possible to have snow instabilities on steep north (N, NE, NW) terrain above 8000 feet. Do not overlook that the snowpack below 30 cm continues to have a winter-like structure (NOT isothermal).
The first run of the day was to the north of Copper summit. The chutes had a thin layer of windblown snow on top of a firm base that allowed good skiing. Check the video of my friend skiing below one of Copper's Summit cornices.
-

-
The lower 300 feet of the chutes until the run-out hat a very thin layer of corn that made us greedy for more corn.
-
.
Below a picture of the full track of the chute.
. 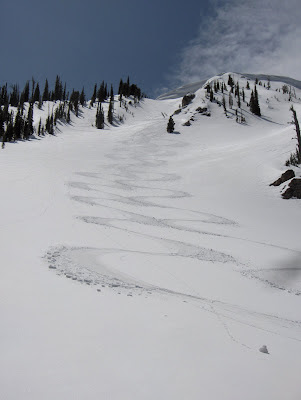 Next we skinned up and yo-yo'd another short (600-feet) slope to the east of Copper summit. This east-facing slope was a moderately steep fun line where we found plenty of hedonistic corn. I include a picture since this east-facing ski run is not intuitive and it is easily missed.
- 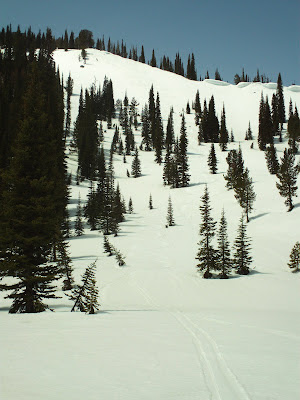 The next video is a small sample of the corn harvest - this was the third run of the day. It is the same slope shown in the above picture.
In my May 8th blog posting it I shared beta about 'Bear Paw Cirque' - the next picture snapped from Copper's Summit shows the cirque to the right in the background. Peak 9220 can be seen prominently on the left. Before the spring season is over (and weather permitting) I will be visiting Bear Paw Cirque - there are some cool lines that need further exploration! 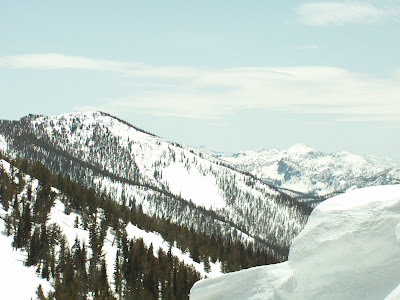 We concluded the day with a BANG! Late in the day the Copper North Chute developed perfect corn conditions, and we skied a deliciously sweet 1200-feet line. The center chute in the picture below shows the last run skied Saturday before skiing back to the road. 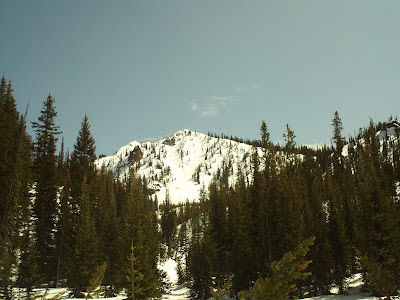 The next video clip shows the skiing at the bottom of the North Chute.
This spring has been so much fun ... the weather and conditions have been favorable for continued skiing, and if it continues it will be a LONG spring season. Soon the Idaho high elevation couloir season will start ... needless to say - it will be epic - so much skiing so little time. 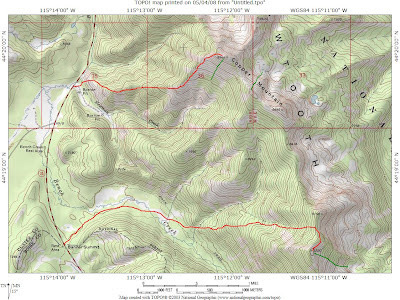 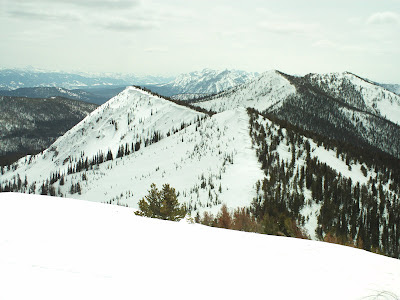 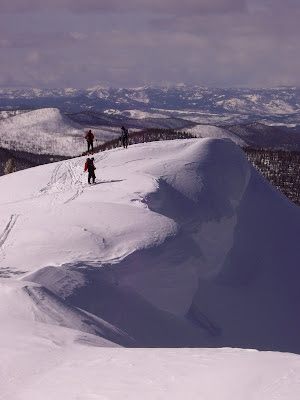