Mother nature has been generous lately. Last Thursday we had a remarkable day of pow skiing [http://www.morescreeksummit.com/2014/03/pilot-peak-pow-day-march-27th-2014.html] , and we got today another chance to enjoy pow skiing late in March.

The next video summarizes well the ski conditions:

It was tranquil day with interesting lighting conditions. Below some randoms pics snapped during the day.
The day started obscured but blue skies and sun intermittently made their appearance between convective cells precipitating more snow as well as graupel.

It was impressive how much snow has been added to the snowpack since last Wednesday, over 50 cms!
Notice in the above picture the snow depth at 270 cms! Mores Creek Summit has an exceptional coverage, and spring skiing is going to be epic!
The 25 and 35 cm layers identified last Thursday are now at 40 and 50 cms. Both produced moderate compression test results with resistant planar results (Q2). The new snow (20-30 cms depending in elevation) rested in top of a thin wet layer.

A solo skier was also ski touring Freeman. At one point, as we skied down a popular NE slope with 32 degrees slope angle we notice the solo skier below us. We were puzzled. Usually we avoid putting tracks on ski runs, and whenever possible do not skin up on slopes above 30 degrees, in steepness. The solo skier was heading up for his second ski run. 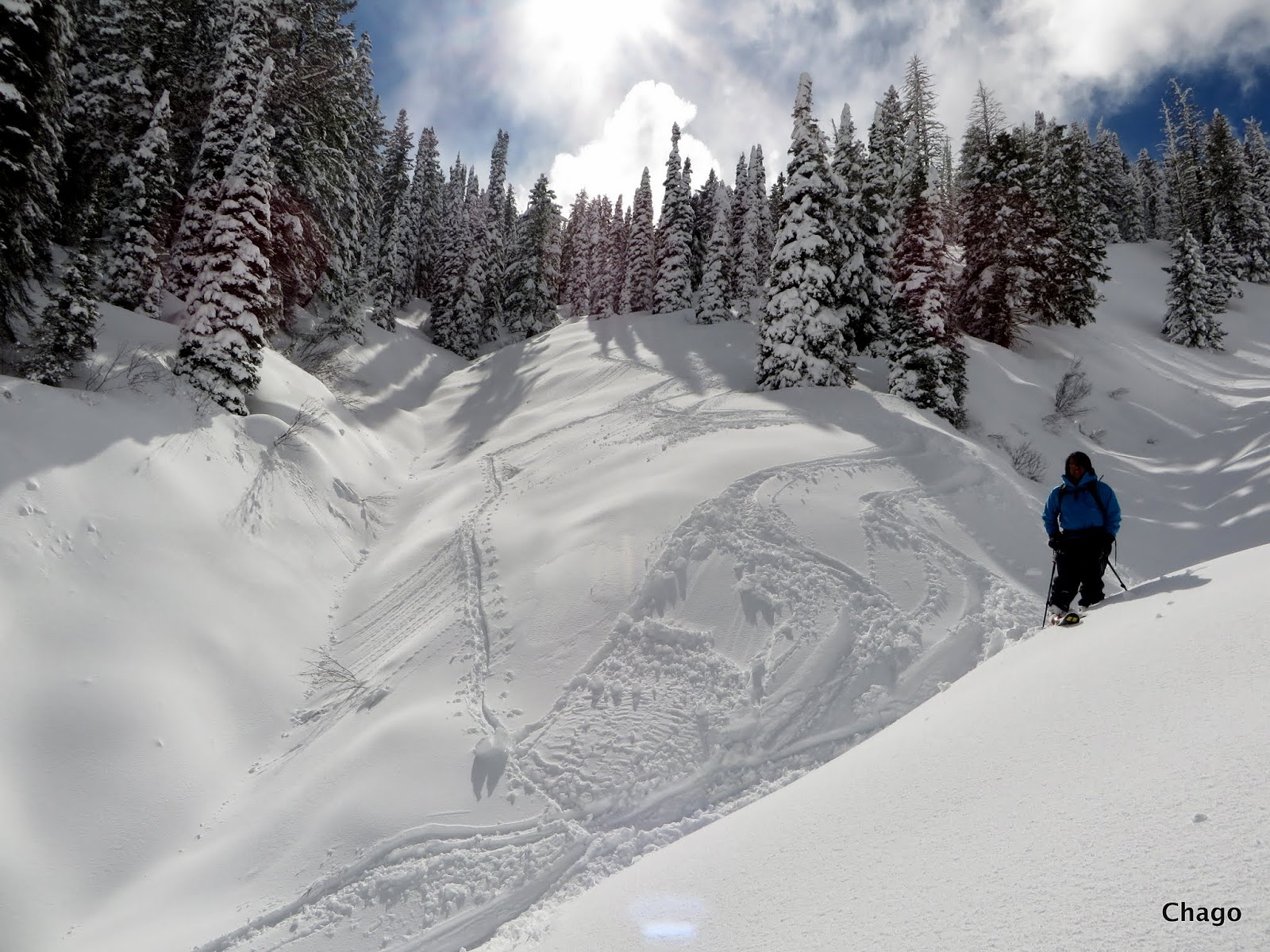 We continued skiing and at the bottom of the run we triggered a very small surface wet slab at a steep roll-over. See picture above. Notice the uphill track of the solo skier.

After our 4th ski run, and as we climbed to the Top of Freeman, we became aware of the solo skier absence. Pedro and I were curious about potential activity at the steep shots below Freeman Summit, and skied down to take a look. Considering the snowpack conditions we were not planning to ski the steep lines. A quick hand pit at Shot #1 confirmed that the new snow was sitting in top of a wet interface. We traversed to Shot #2 and immediately noticed an avalanche release on the third turn of the solo skier tracks. From above we could not identify the exit tracks. Carefully I skied from safe island to safe island to scout for exit tracks.
Once we got to the avalanche debris we identified the exit track, which was near the bottom, next to a tree with its base heavily pplastered by snow from the avi. Just to be sure we searched for a beacon signal, and carefully inspected the small debri field.


The unstable signs were there. Another avalanche has also released nearby - see picture below. The skier triggered avalanche and natural release could be characterized as wet slab. The new snow was settling fast due to warm temps, but the interface was moist due to Saturday's rain event.
I must admit that I was angry for having to expose myself and my son Pedro to avalanche terrain to make sure the solo skier was not injured or buried. I can understand folks with higher risk tolerance ... but these folks also need to be aware of the impact of their actions in others.

The solo skier was not only lucky not to get buried, but not to impact the tree near the avi track bottom,  immediately next to his exit track above the avi debris field. Furthermore, the avi did not triggered the weak layers buried at 40 and 50 cms. That would have definitely KILL HIM! Very lucky indeed.

Lastly, there is a NEW snow type of machine - SNOW BIKES - at Mores Creek Summit. They had to work hard to get out of the steep drainage (and exposing themselves to steep unstable terrain). It seems to me snowmobiles are still the way to go!

Posted by Chago Rodriguez at 11:35 PM Links to this post 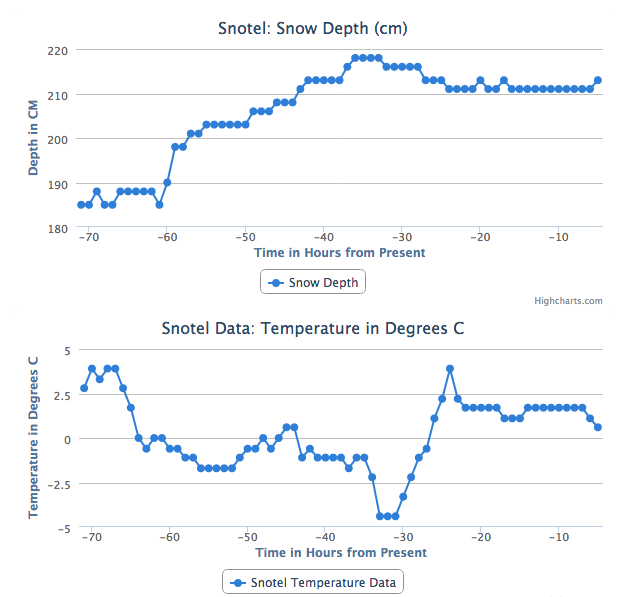 The next video is long. I recognize I am a terrible video editor, and it was hard to cut what looks to me like pretty good pow skiing. Pedro and I took turns with the GoPro camera. Enjoy it.

Early in March we had another pow ski day: http://www.morescreeksummit.com/2014/03/great-start-for-march-2014-pow-skiing.html but the snowpack structure did not gave us confidence to ski lines above 35 degrees in steepness. Similarly, Thursday snowpack structure provided us with evidence of instability and limited our skiing to lines below 35 degrees in steepness. The next pics illustrates cracking of a soft slab above fragile near surface facets with rimmed precipitation particles from the early part of the storm. 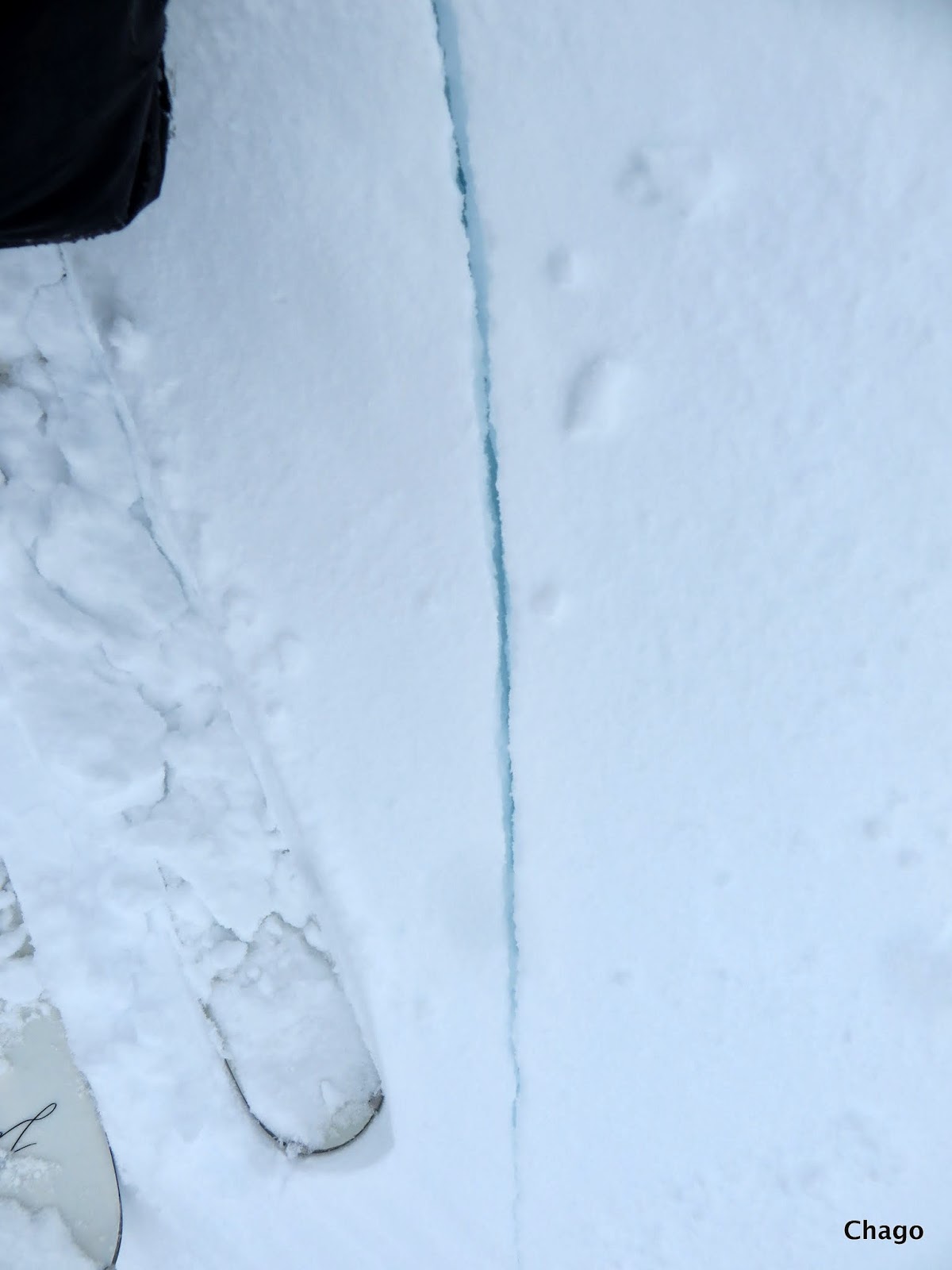 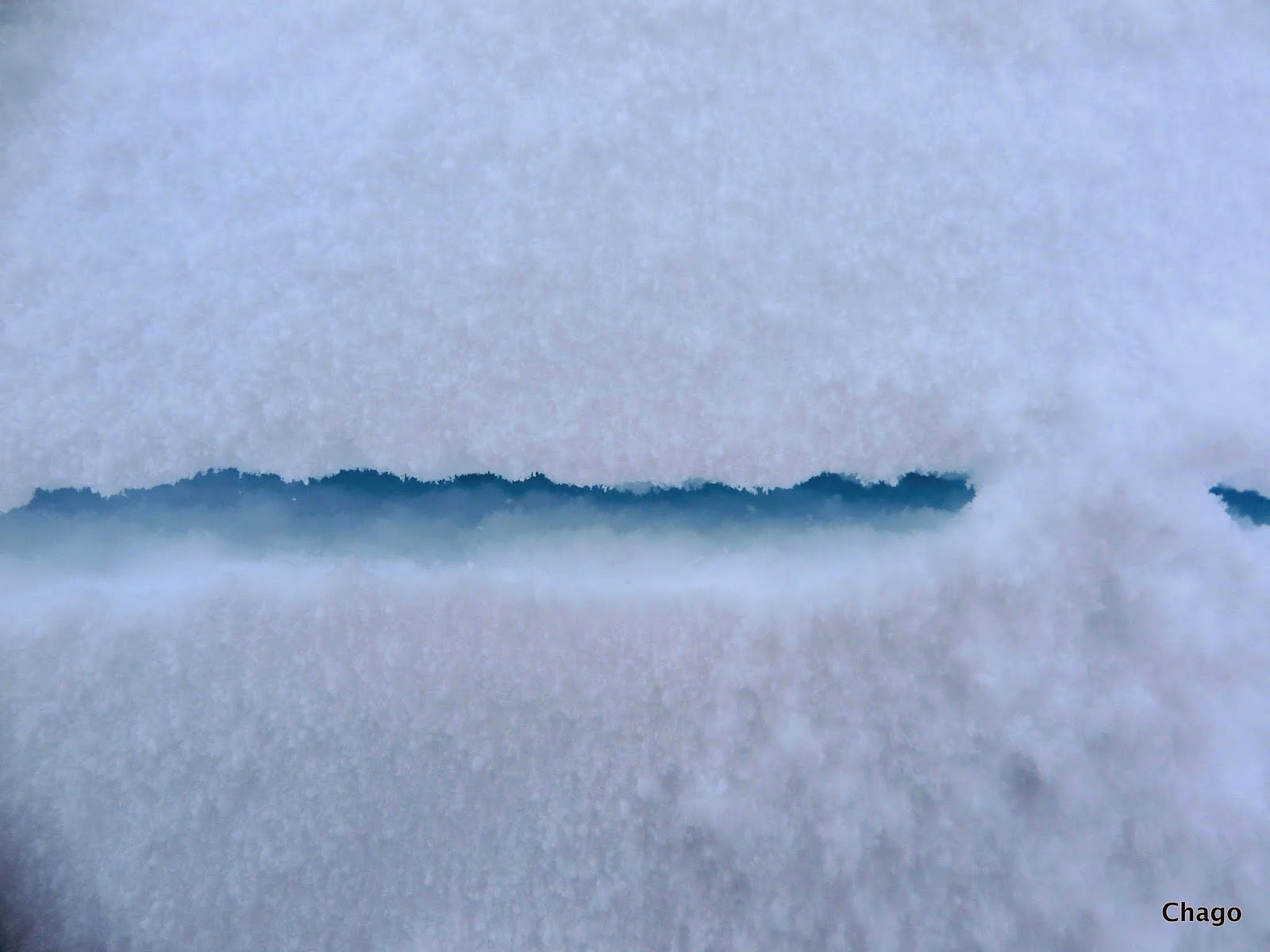 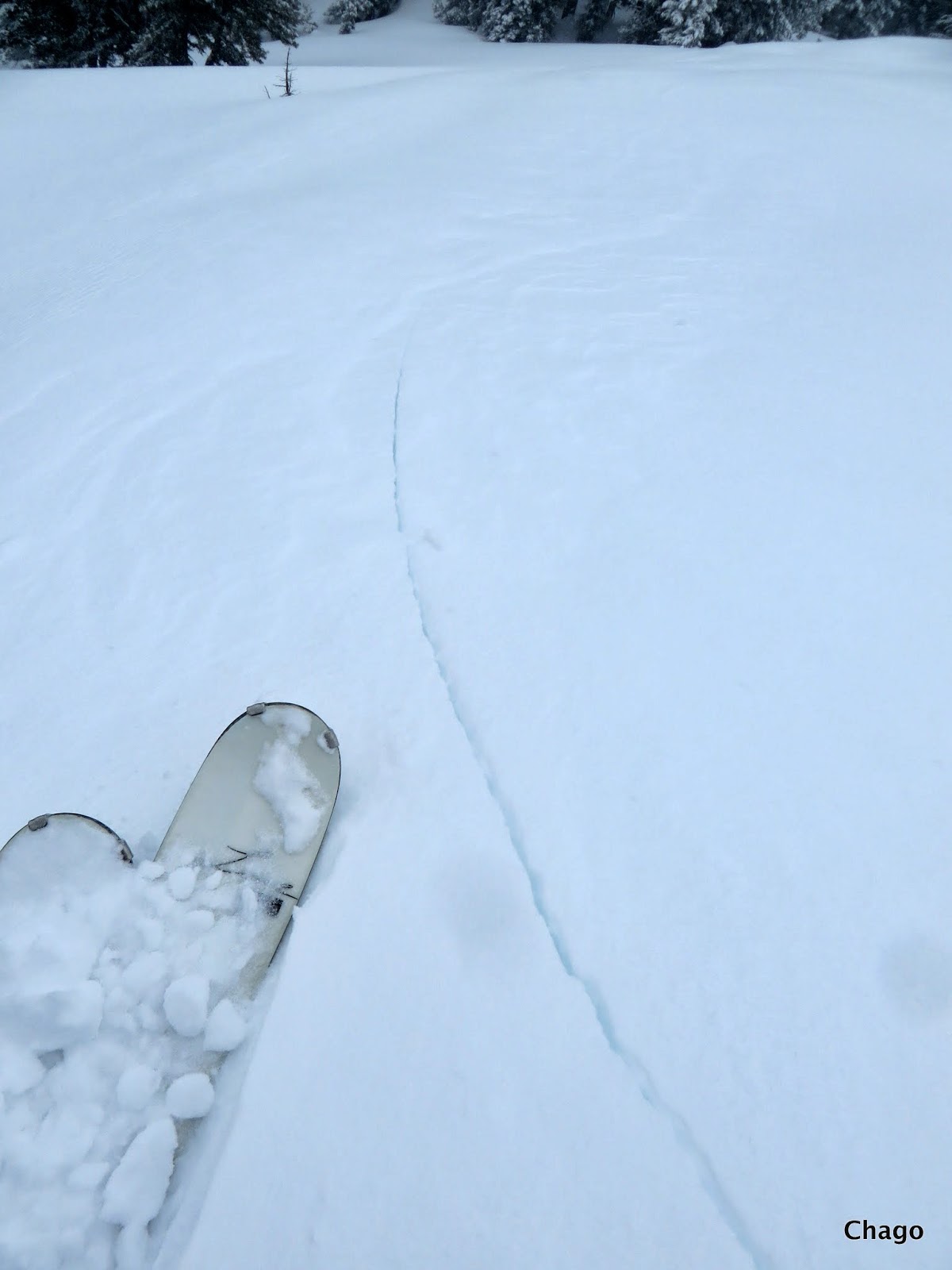 The weak layer interface  responsible for surface cracking reside at a depth of 25 cm. This reactive weak layer rests above a fragile decomposing crust. Below the crust another layer of facets was buried 30-35 cm from the surface. Both weak layers failed stability tests with easy scores (CTE and ECTP1-2) and sudden collapses (Q1). Not surprisingly, every slope we skied exceeding 30 degrees produced spider webbing fractures, but the soft slab nature inhibited propagation. Indeed, we were deliberate to avoid any slope impacted by wind transported snow as well as wind slabs at ridge tops.

It snowed for most of the day, augmenting the snowpack depth by 10 cms by day end. Too bad we could not count with our usual cooler weather to preserve the good snow!
Naturally, anticipating the storm arriving Friday evening we experimented with an extended column tests were we loaded the equivalent of 20 cms of 10% snow. The extended column produced fracture propagation with sudden collapse and planar character. Tomorrow Sunday I will be touring the backcountry to understand the extent of this latest instability cycle.

The best skiing could be found at treed and open meadows that protected the snow from strong south easterly winds. 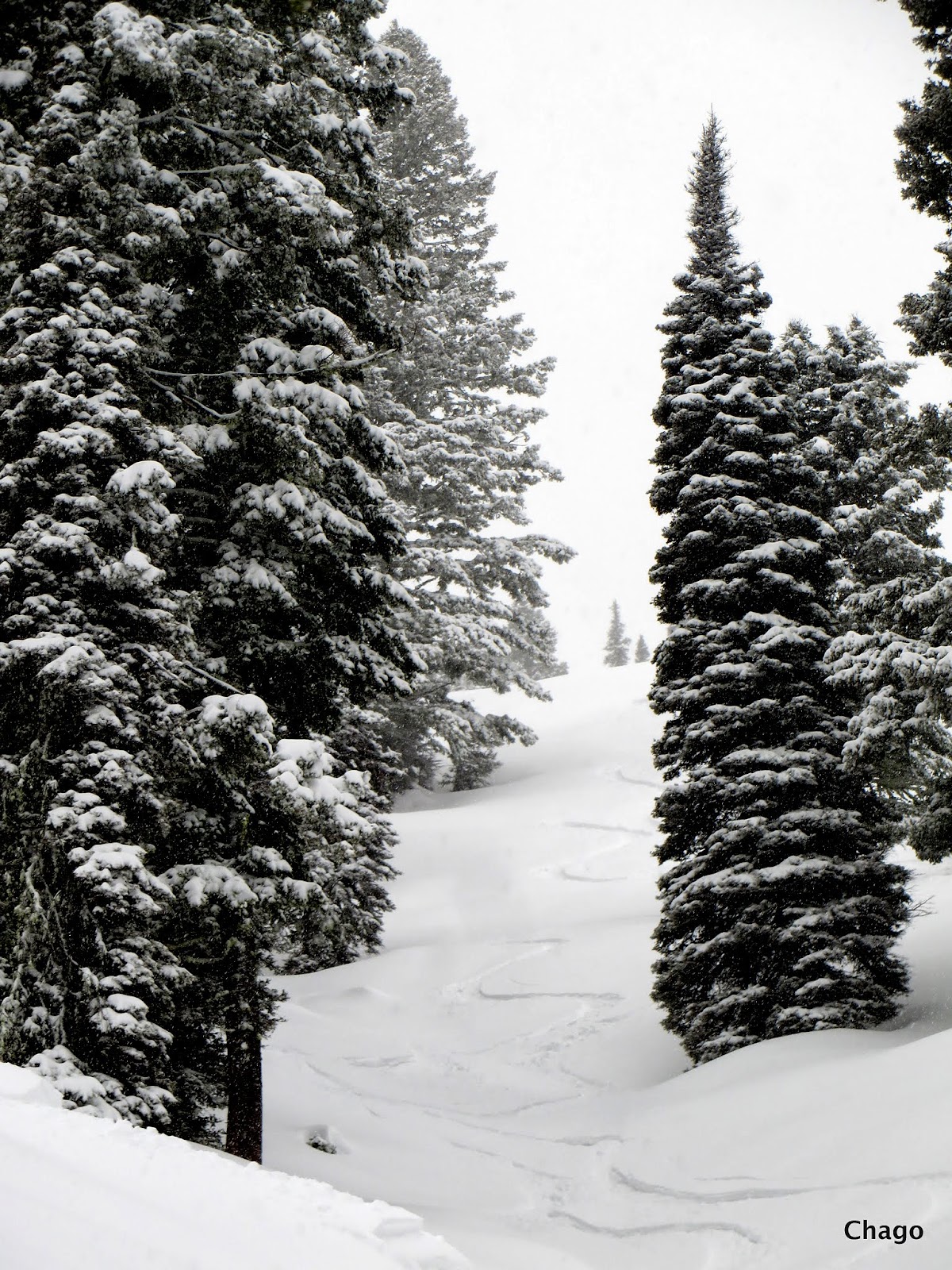 Once more the coverage at the creek bottoms and road level is pretty good, providing with fun skiing top to bottom!

The later part of March Pedro and I spent it at Silverton Colorado teaching a Silverton Avalanche School Avalanche Level 2 course. In addition we spend time with Chris Landry from the Center for Snow & Avalanche Studies coordinating the near future installation of three miniFMCW radars developed by Pedro and I.

Below few assorted pics from this year Silverton Avalanche School Avi l2 course. Please feel free to contact Jim Donovan at Silverton Avalanche School (SAS) if you are interested in participating in their courses, or better - if you want to be part of next year SAS AVI L2 courses with me and Pedro. Space is limited. In addition, there are a number of new didactical techniques recently developed by us that allow to cut the classroom time to half day for SAS Hut based courses. This leaves 3.5 days for field work! And, Red Mountain Pass  in Colorado with its complex and variable snowpack typical of high elevations provides ideal terrain and snowpack for learning snow science and advanced travel techniques. 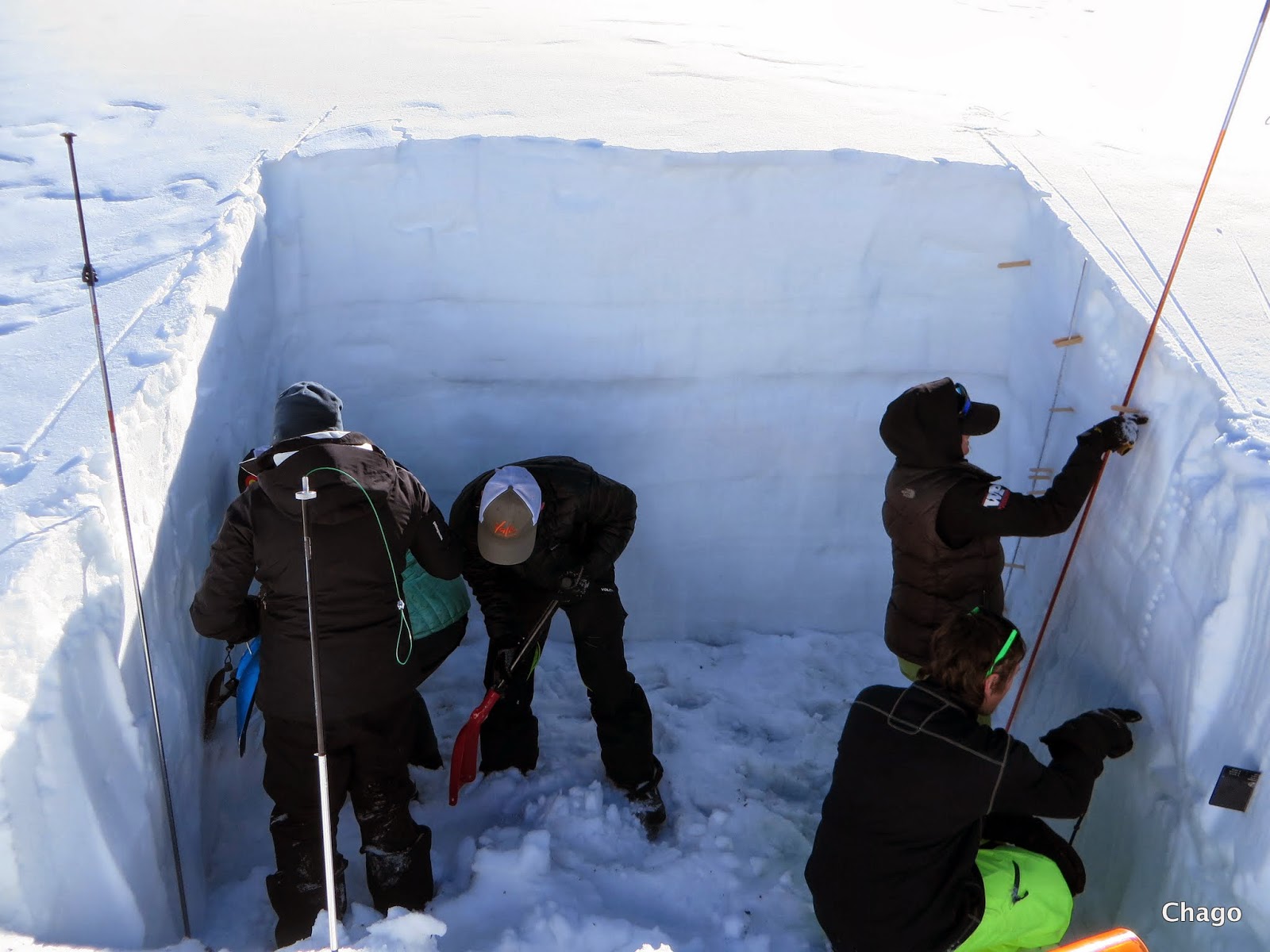 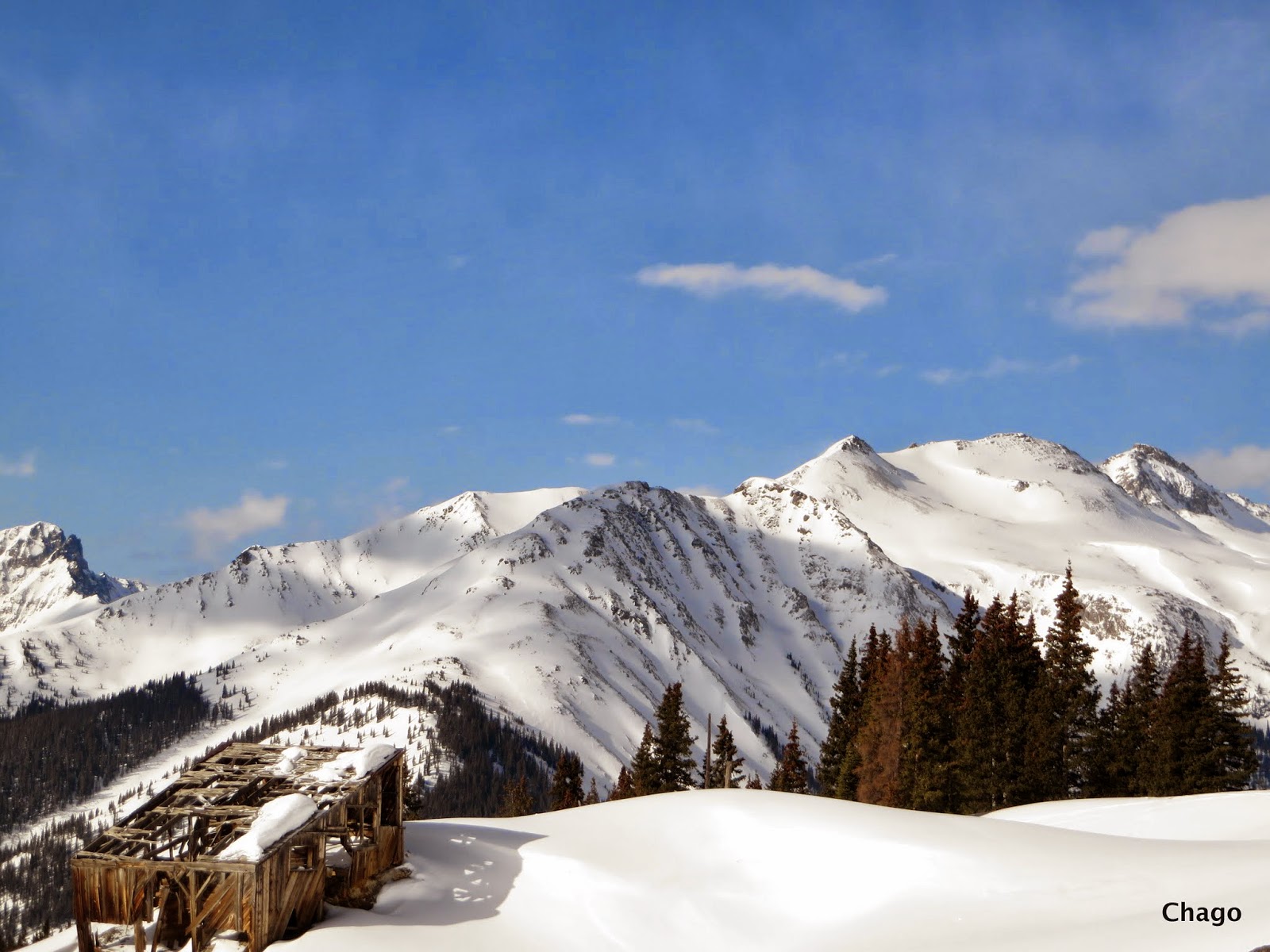 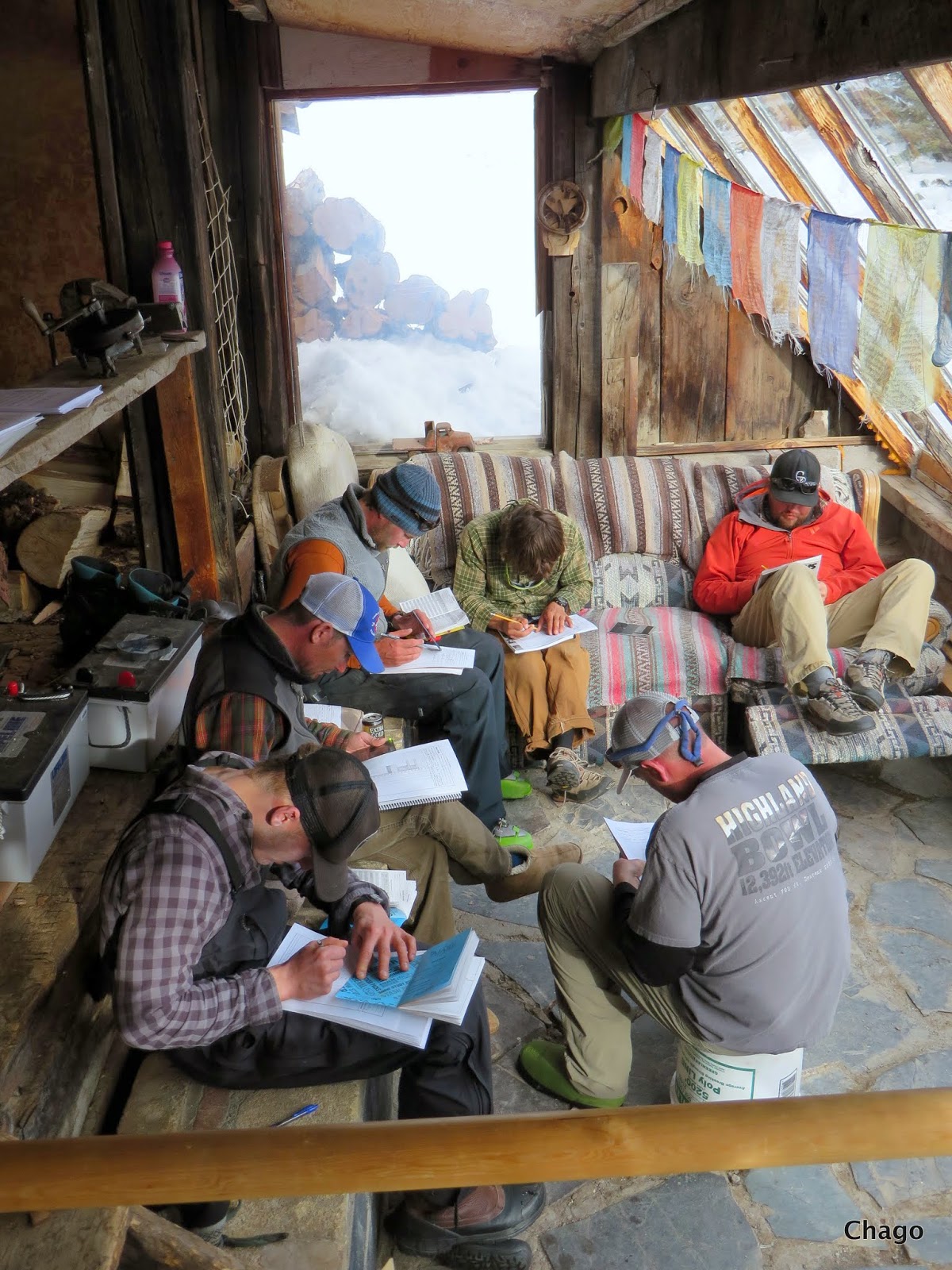 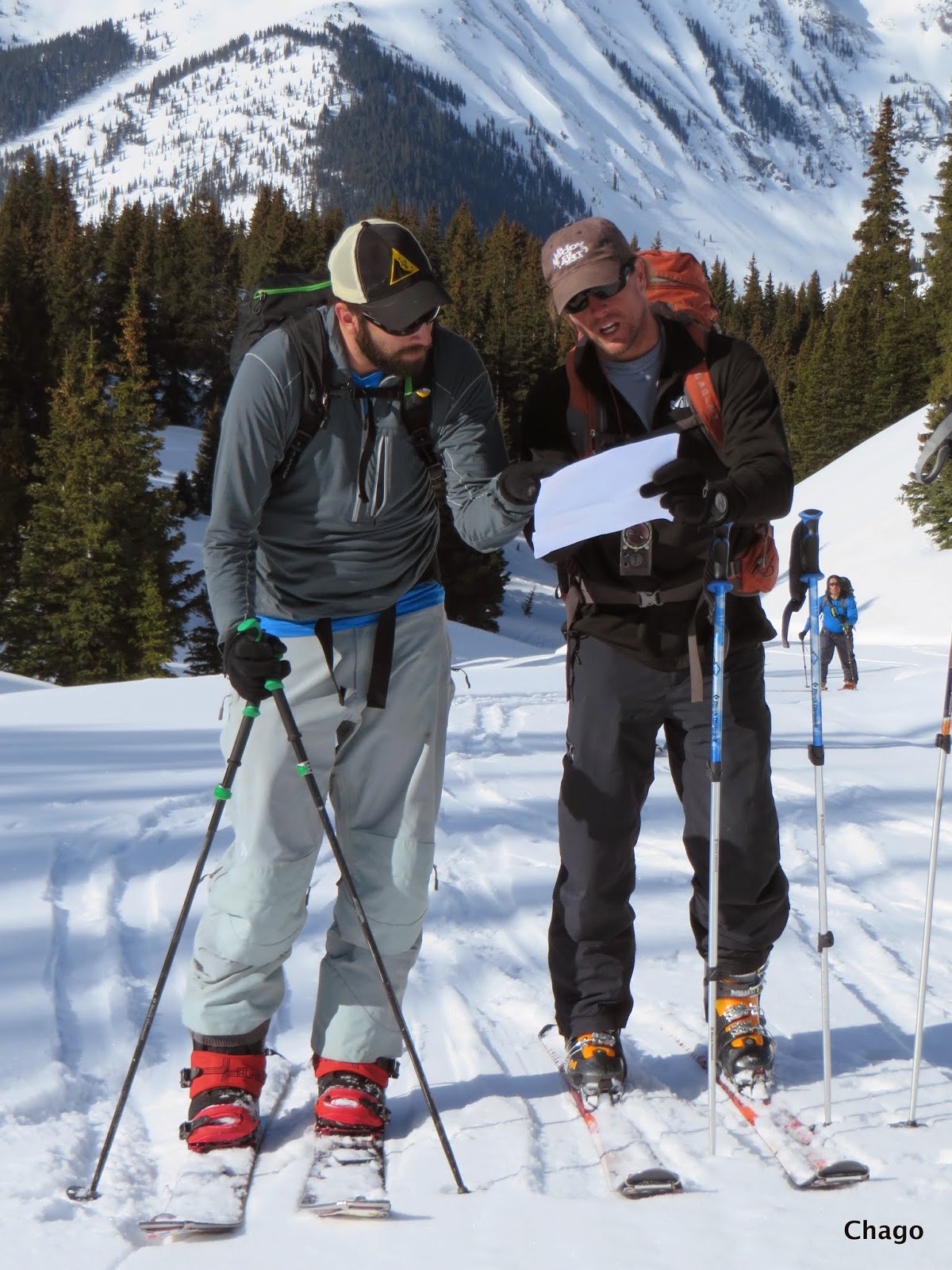 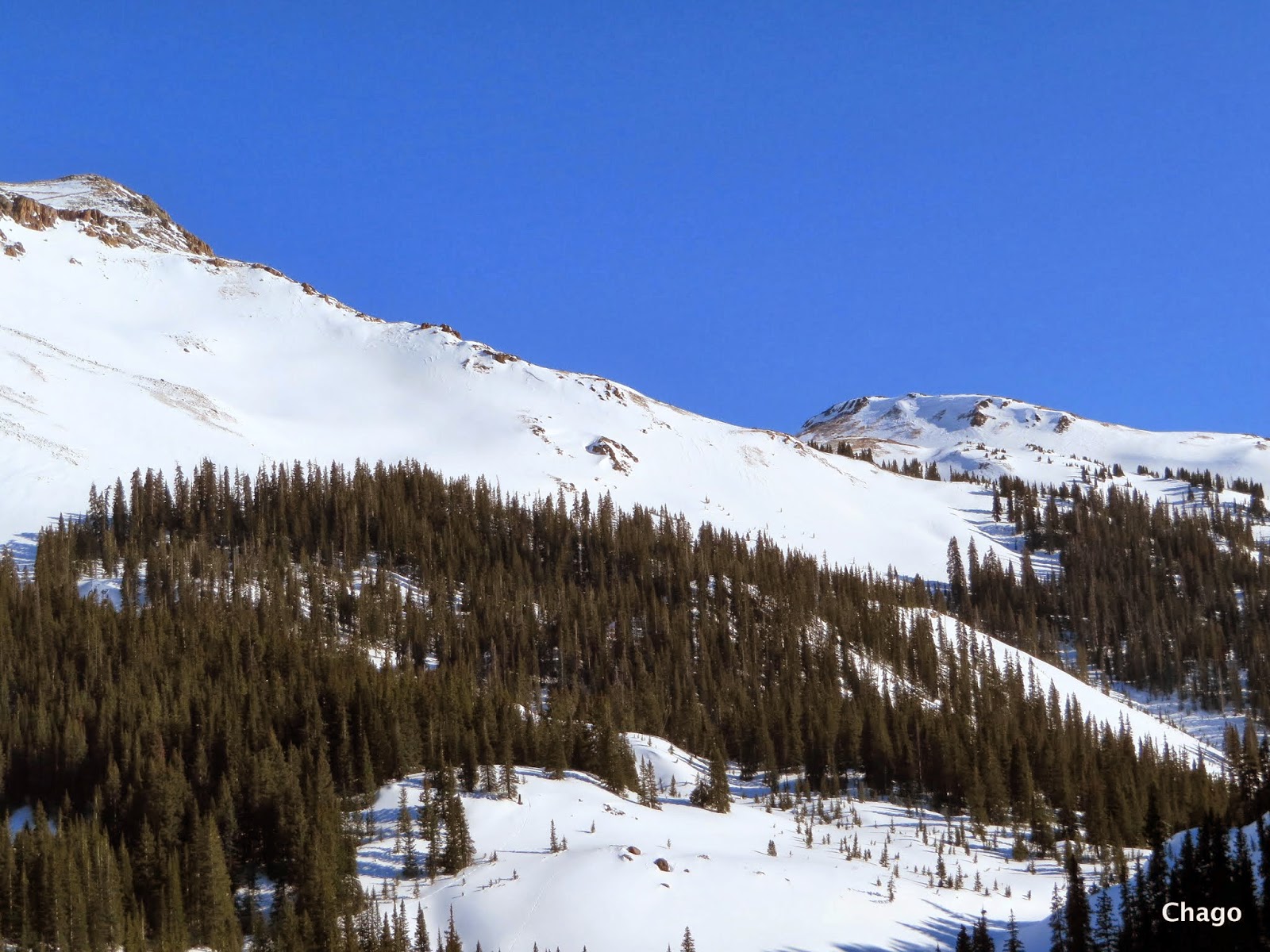 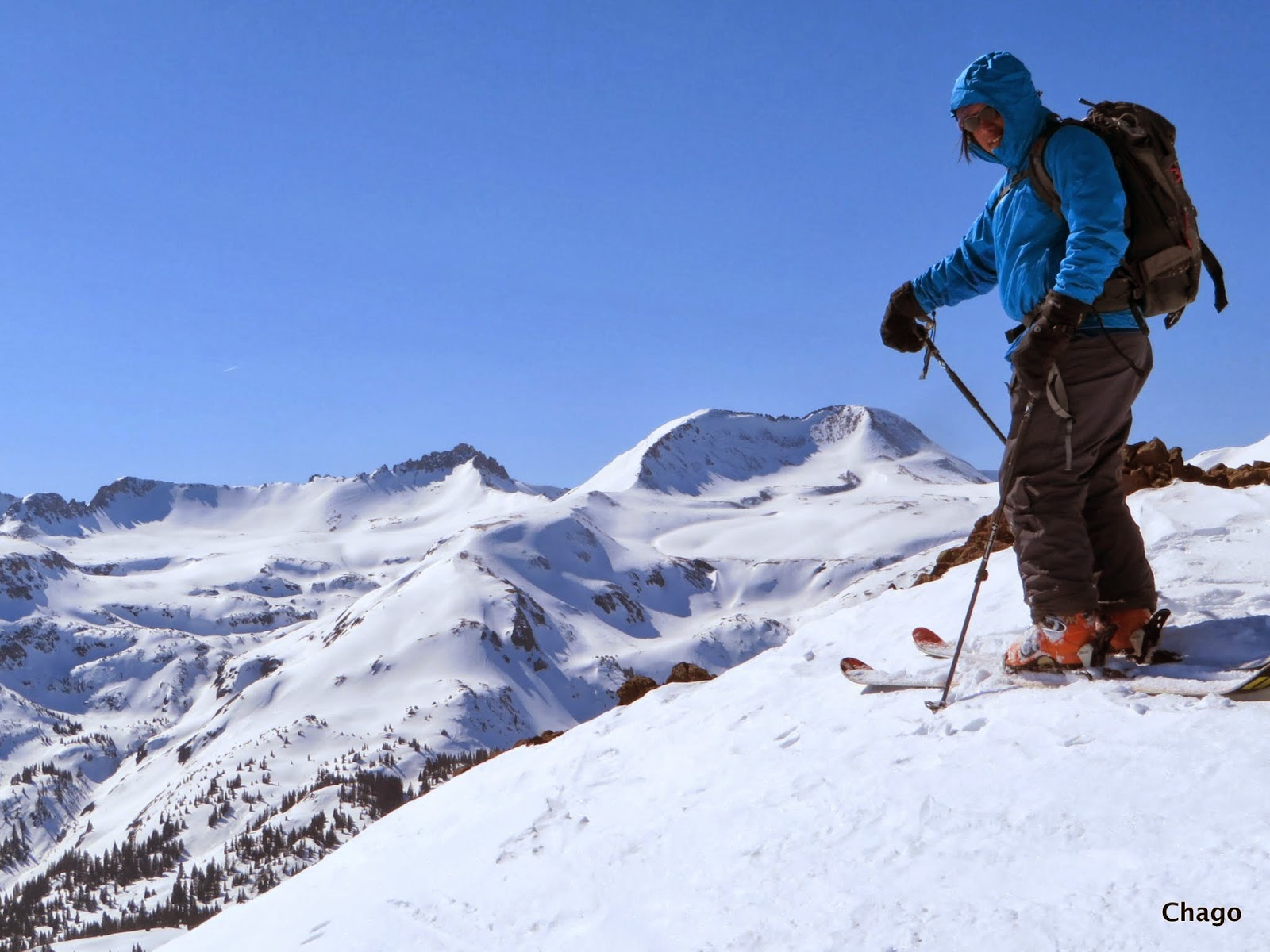 Posted by Chago Rodriguez at 2:34 PM Links to this post

Temps during the start of this latest precipitation event have been in the mild side, but finally last Saturday night temps dropped enough to allow dryer/colder snow to precipitate at Idaho Central Mountains.
The plan for the day was to have an early start, and ski tour Pilot Peak near the 8000 feet elevation. But once we surpassed the 6400-6500 feet the level the snow started to feel light, and it kept getting better due the very productive 2 cms/hour precipitation rate until late morning.

Between 6000 and 6800 feet there was 20-30 cms of new snow in top of a supportable rain crust. Above 6800 the rain crust became very fragile. This 2 cm thick porous, and decomposing crust layer is undermined by a thin layer of melt freeze recrystallized 'near surface facets'. This layer was very reactive at wind affected spots, producing CT1Q1 scores as well as positive propagation propensity results (ECT & PST). Ski cuts at a small steep test slopes resulted in propagating cracks. It should be noted that due to the soft slab conditions,  stability testing was somewhat ricky to avoid "False Stable" results.

The near surface facets (NSF) buried at 30 cm needs to be tracked, particularly as more NEW snow, warm temps, and winds further develop a potentially dangerous slab at starting zones. Late in the day, winds gained strength and snow transport accelerated. I strongly suggest to look for this reactive layer during the next few days, and perhaps a week or two!

Considering the snowpack conditions we scrapped our plans to ski Top Of The World, and instead harvested the new 30 cms of snow at Summit Creek Glades, since these slopes were not impacted by the prevalent west winds, and there are few locations with terrain steeper than 35 degrees.

Check the next short video clips . Snow looks good and ...  it was indeed very niiiiiiice!

Through out the day we had extremely poor visibility, and had limited chances to snap pics, thus the above videos happens to be the only mean for readers to realize how much fun are the current conditions at Mores Creek Summit, particularly above 7000 feet. 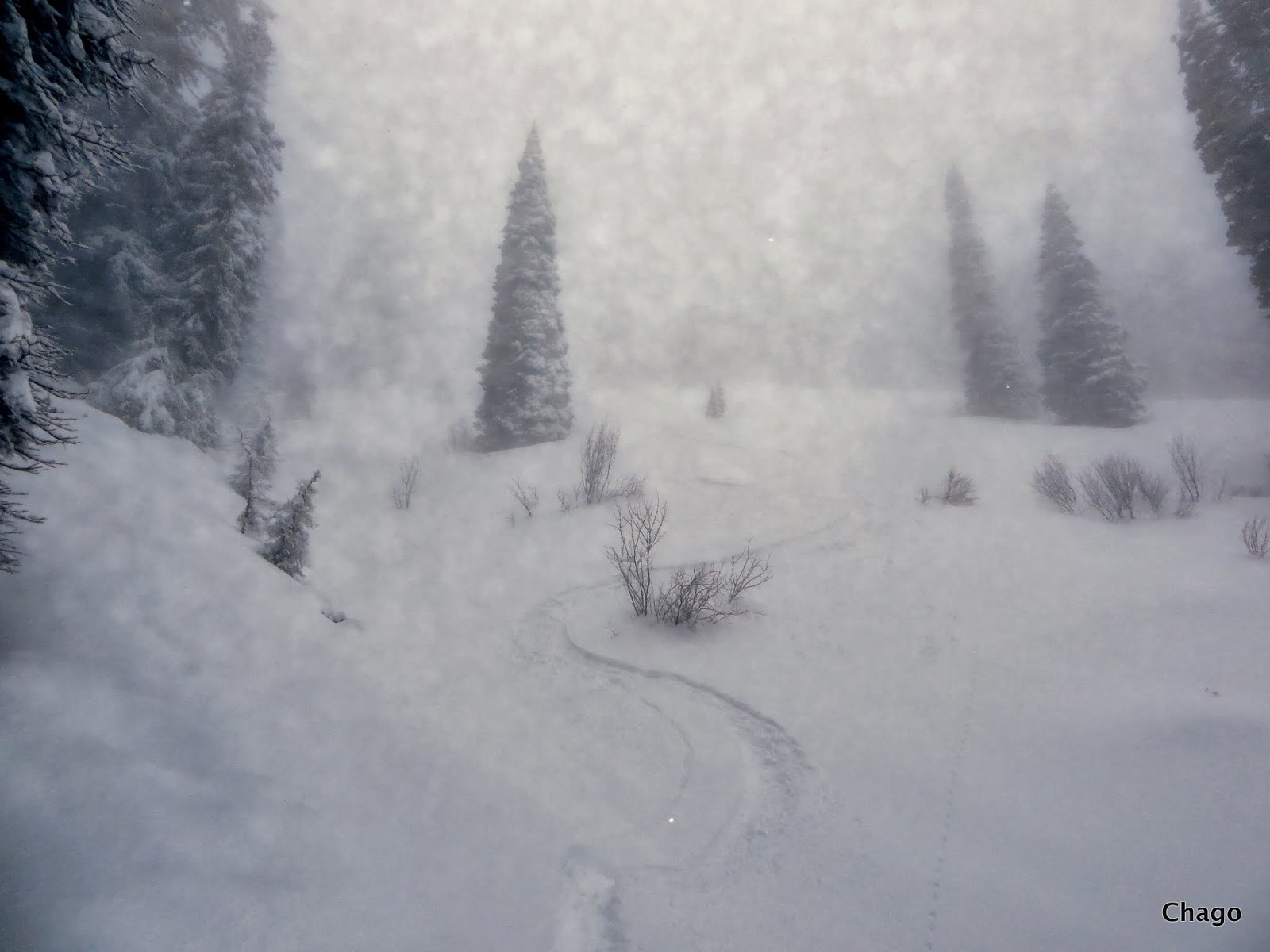 As the day progressed temps increased from -5 Deg-C to +1 Deg-C by 1 PM, and unavoidably snow densified, the difference in snow density above and below 6800 feet became more pronounced. But there was a third snow transition zone at MCS summit today. Later in the day, as temps augmented, steep south aspect slopes at the 5900-6200 feet started to produce numerous small wet loose releases. 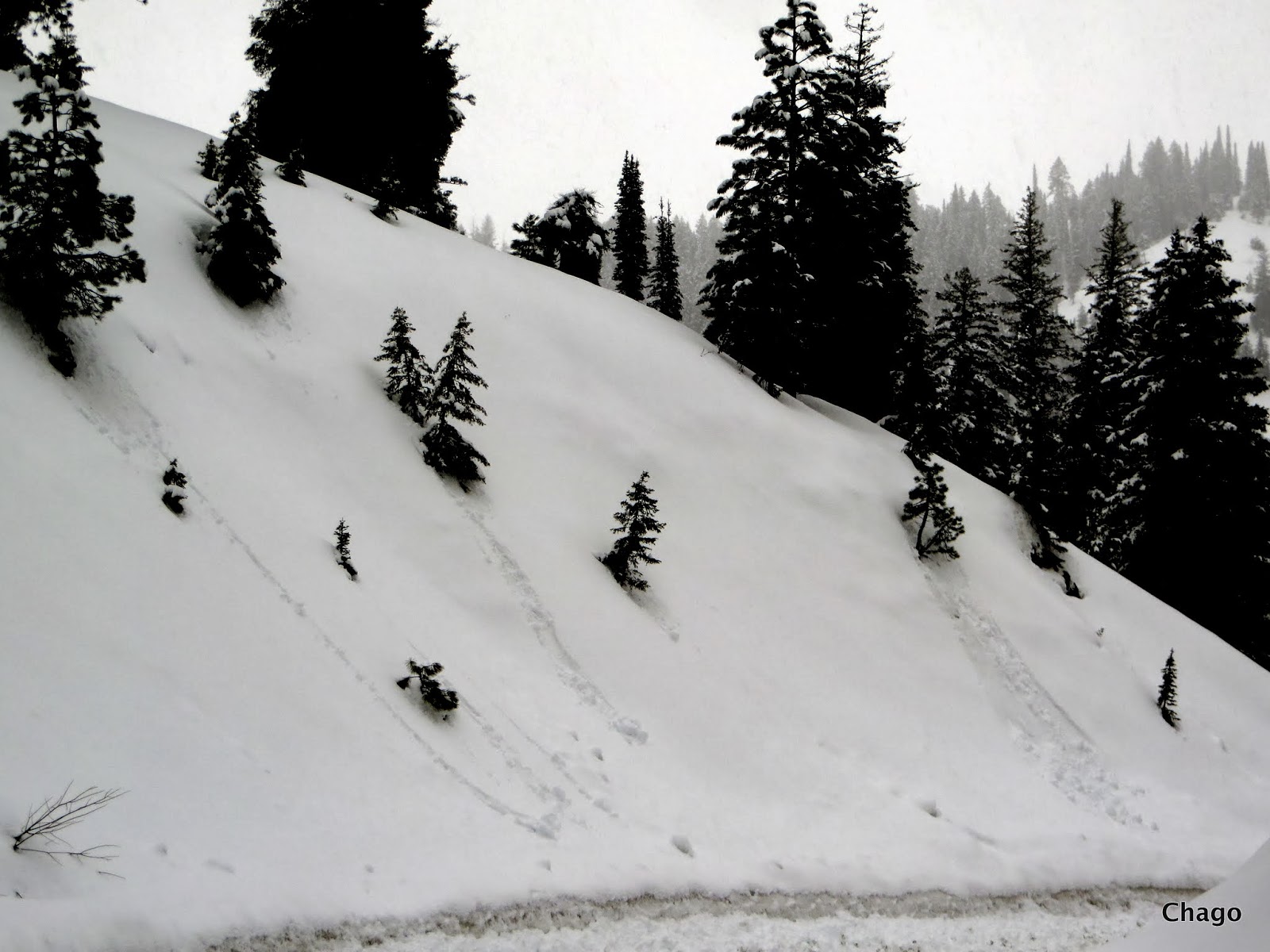 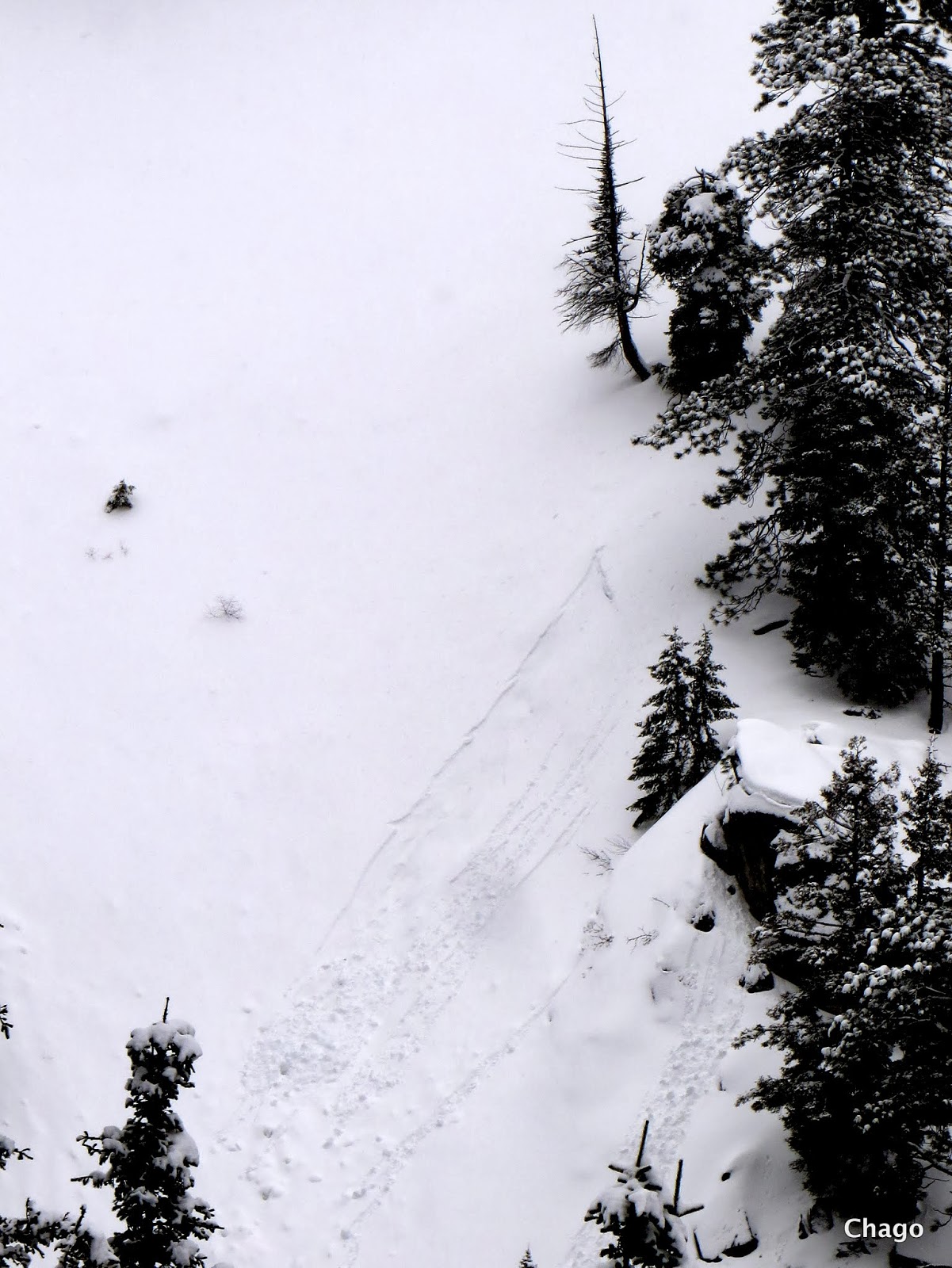 After snapping few pics of wet releases at Lamar Ridge South aspects, I continued to ski down, where a small procedural ski cut at a 34 deg slope with North aspect surprised me by releasing a small but punchy wet slab. I was not particularly surprised by the release, but how energetic was this release for its tiny and wimpy size. 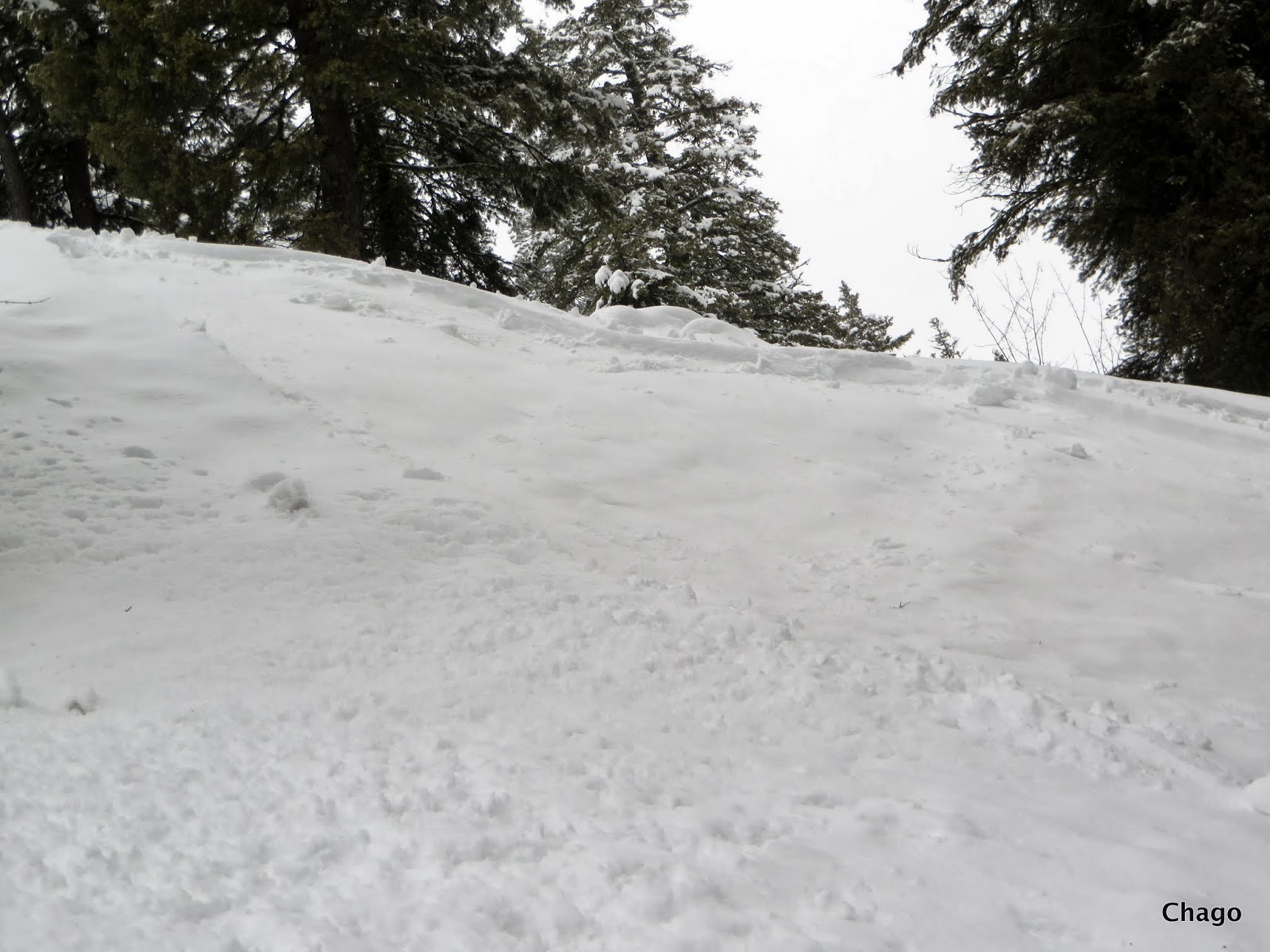 The wet releases were the result of the new snow becoming excessively moist, turning into slush, and sliding above the exiting low elevation rain crust.

Below I include some pics of the lower slopes, close to the Summit Creek bottom. Notice the much improved snow coverage. Last two winters MCS did not have as good snow coverage as we currently have. Impressive how February has delivered! Skiers - get out, it was awkward how few were BC skiing today! 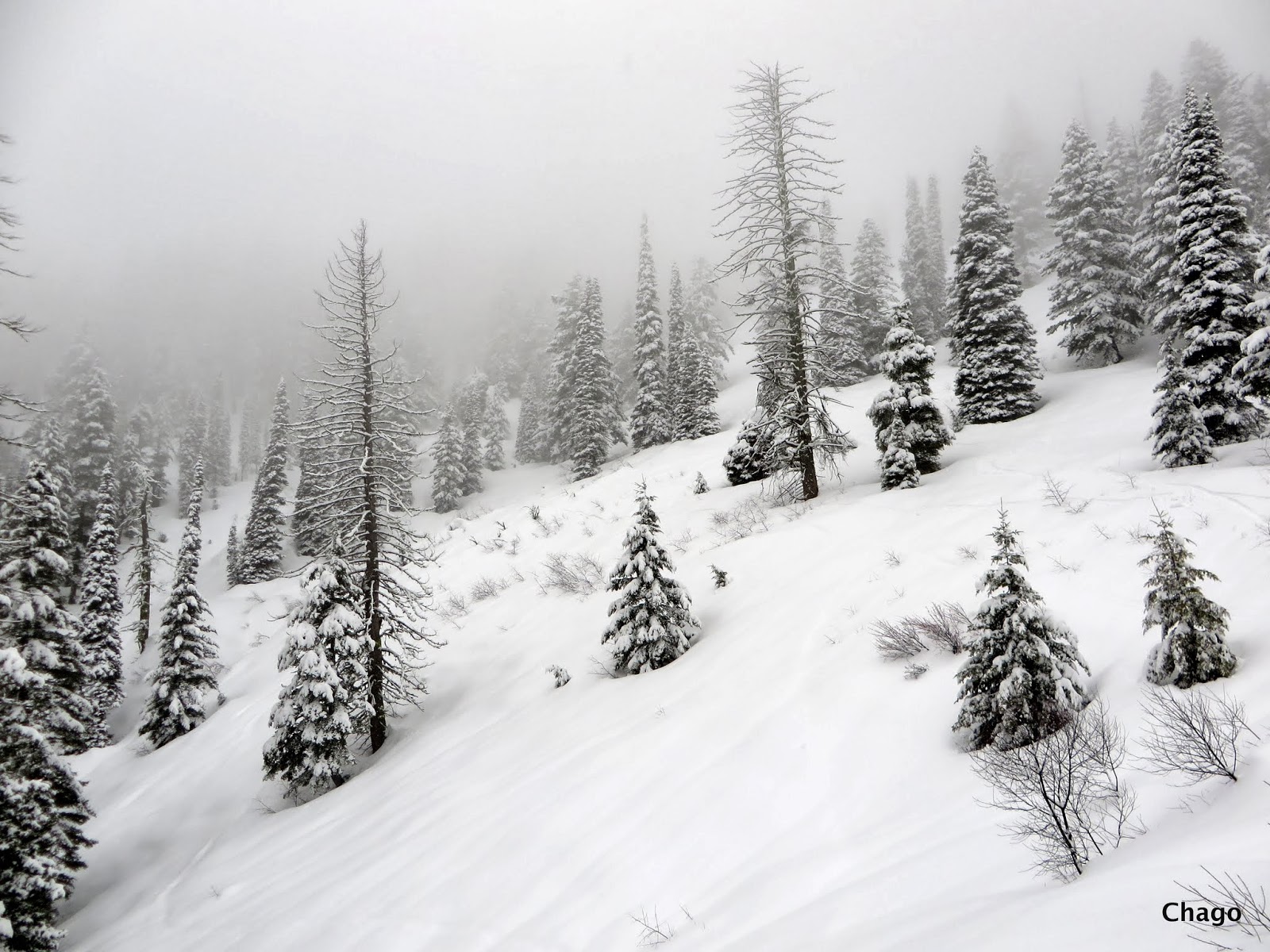 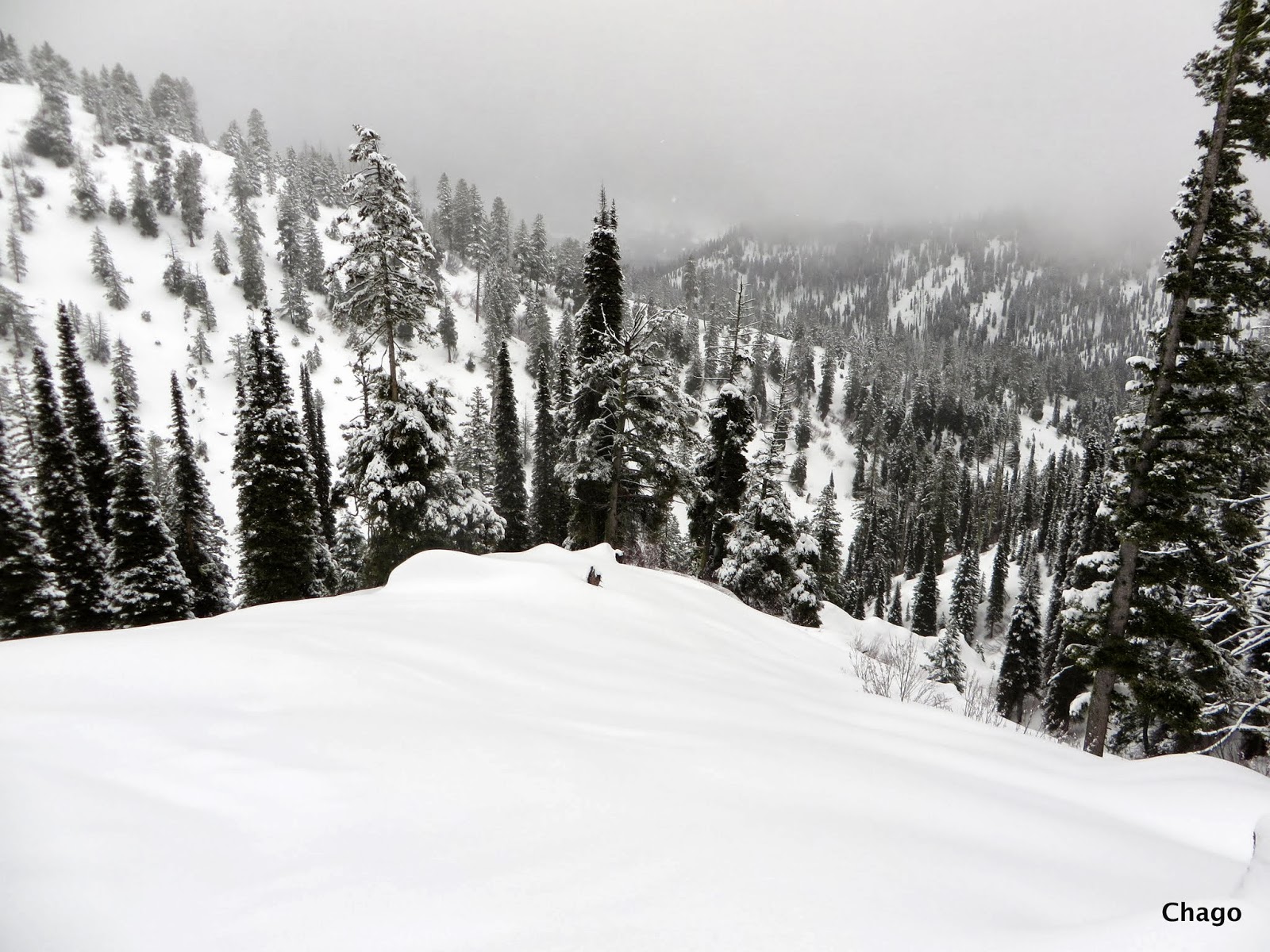 Last Friday I ski toured Fisher Creek Saddle with Dave Bingman, director of Payette Avalanche Center. We did a lot of nerdy snow research work, but still saved time for pow skiing. The sky opened only for a very brief moment and the next pictures are some of the few we were able to snap. Needless to say - the terrain is bitching nice! 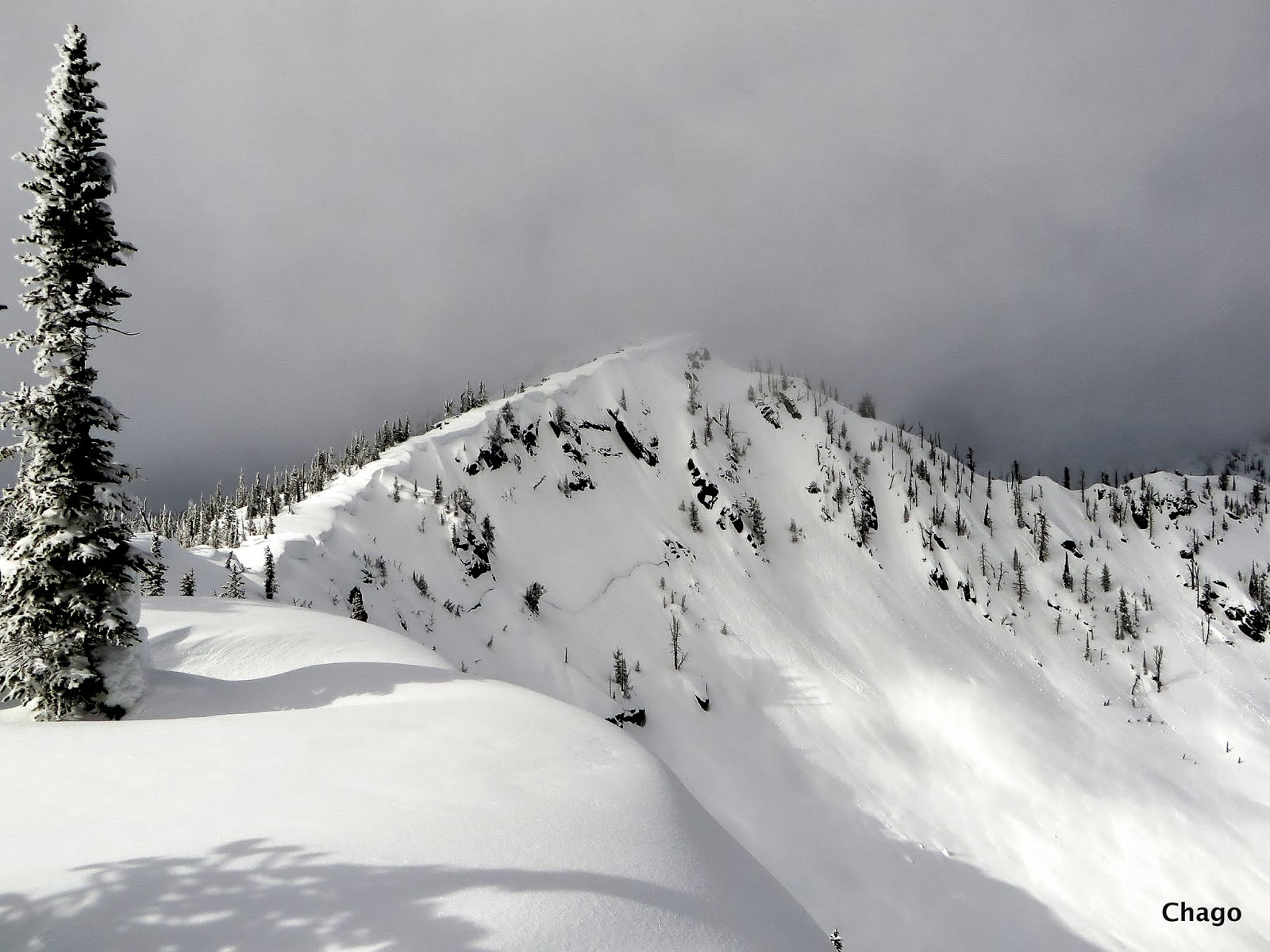 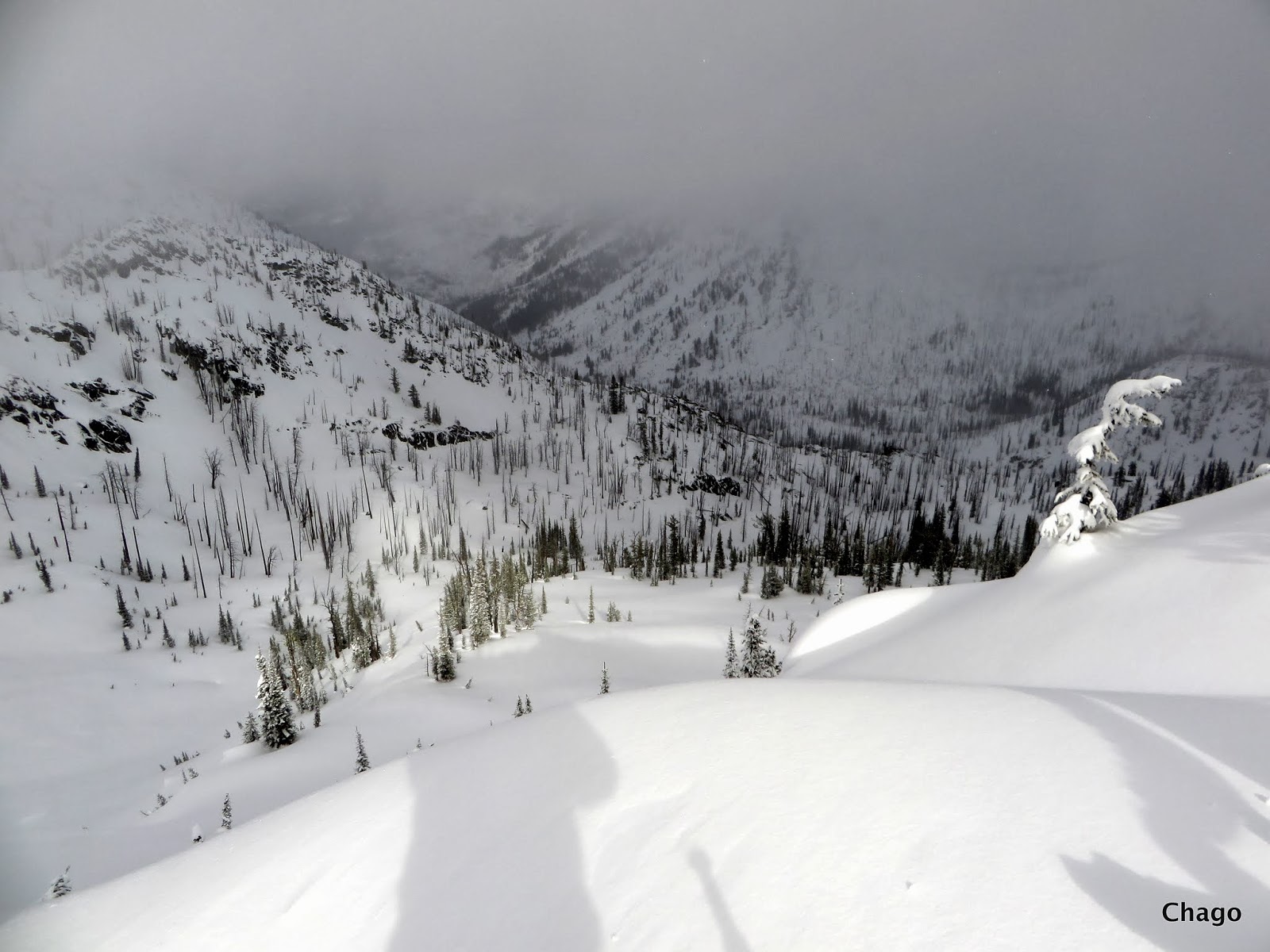 Some of the research stuff we did Friday was to use Boise State University miniFMCW radar that Pedro and I have developed to compare snow stratigraphy few meters behind a cornice, and 3 meters away on the windward side of the ridge. The difference in snow depth (distance to the ground) and layering between two locations just 3 meters away is simply mind boggling! 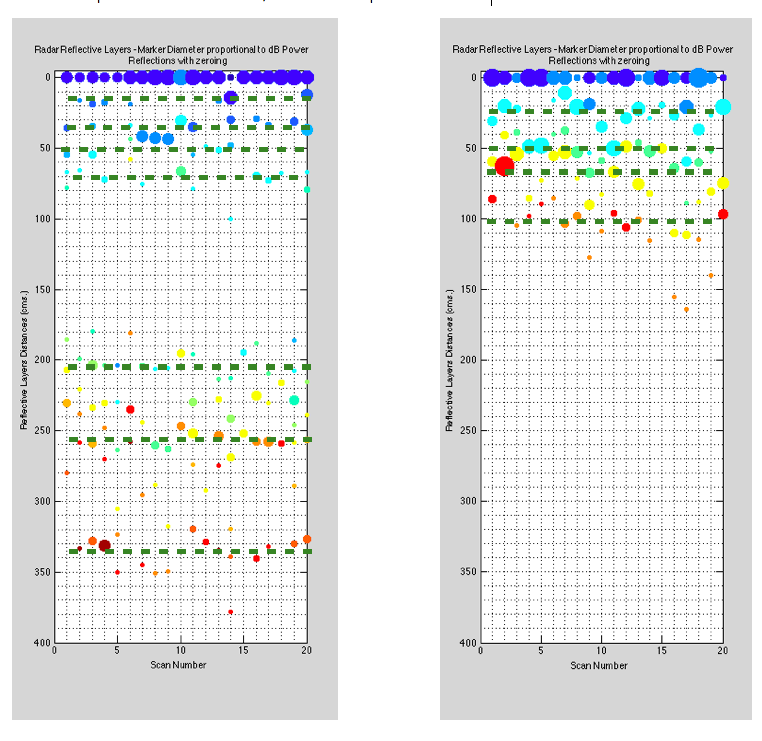 Finally - Remember it is March. There are not too many days left of POW skiing. Make a point of getting out!
Posted by Chago Rodriguez at 8:03 PM Links to this post