What a splendid day to ski at Mores Creek Summit. There was between 20 to 30 cms of new snow depending on elevation.

The day was cold with temps in the -6 to -7 Deg-C, with Light to Moderate winds, and variable sky coverage fluctuating form blue bird in the morning, to cloudy or obscured most of the day. The light winds and cold temps kept the snow soft throughout the day.
'We had a slight delay early in the morning ... we started to shovel snow from Mores Creek Summit (MCS) parking lot so that we can safely park away from the road, but we were very LUCKY today ... An IDT snowplow drove by, took mercy on us, and plowed a section of the summit parking. On behalf of all backcountry skiers, we want to express our heartfelt appreciation to IDT and its plow drivers for the fine job they do to plow Idaho-21 pull-outs in the MCS corridor. Without their work, backcountry winter recreation at Mores Creek Summit would NOT be the same!

We skinned to Top of the World, East of Pilot Peak Summit, and again we were very please not to find any evidence of instability. Two days ago the same area showed alarming propagation likelihood results in a buried crust layer with facets above it. Stability analysis for today did not show fracture propagation propensity. The buried crust/facet combo layer resulted in CTHQ1(SC) and ECTN scores. The new snow from last night storm increased the depth of the crust/facet layer from 60 to 70 cm deep in an East aspect slope, 7800 feet in elevation, and 21 degrees steep.

I agree with the Sawtooth Avalanche Advisory for december 23rd and 24th, where the forecasters caution about the unpredictable nature of buried facets above crust layers:

In the Soldier Mountains, Simon noted a concerning snow structure and poor stability test results on a layer of large faceted snow crystals sitting on top of a hard ice crust about 3' deep on some generally northerly slopes at various elevations. Over my career, I've learned to never trust a crust+facet combination when it receives a rapid load; exercise caution where this snowpack scenario exists.

The latest snow pit with negative propagation results was located less than 30 meters from the snow pit that produced positive results two days ago. The snow pit for December 24th lacked a steep temperature gradient at the facet/crust interface, while the snow pit for December 22nd had a significant temperature gradient at the same weak layer interface. And we must ask; Has the gradient decrease during the last two days (temporal variability), or it is the result of spatial variability in the snowpack? Pedro and I assumed that the reactivity of the facet/crust weak layer is driven by the continue formation of facets (crust decomposition), and that spatial variability in the snowpack is responsible for localized areas where temperature gradients exceed the critical 1 deg-C per 10 cm. In other words, we have a snowpack with weak points, and we need to treat it with a respect.

As we ski toured and skied, we diligently searched for evidence of instability, but none was found today. Ski cuts in steep slopes, hand compression tests, and snowpit work (with ECT and CT) were unremarkable, with the exception of the sudden collapse (Q1) at the 70 cm facet/crust layer buried 70 cm. It is hard to trigger this deeply buried layer that does not seem to be able to propagate at the slope we evaluated it today. But considering the high consequences of triggering a 70 cm slab, we recommend BC recreationists to continue to carefully evaluate steep slopes above 7200 feet you intend to ski at MCS.
The stability wheel suggest that even though there was today a low likelihood for triggering and propagating a slab fracture, there is a concerning structural weakness buried 70 cm deep. This weakness is failing as a sudden collapse. One strategy is to manage the terrain such as to avoid areas where a trigger likelihood will increase; for example seek uniform slopes with no stress concentrators and/or that lacks shallow pockets. Another strategy is to avoid steep terrain or steep starting zones with slopes angles above 35 degrees until the 70 cm crust/facet becomes resistant planar (Q2) or broken (Q3).

Back into snow riding conditions. The strong winds that affected many areas in Idaho, had a minimal impact at MCS. The snow conditions were soft at all aspects, and very few locations developed wind slabs.

Pedro shows in the next video how FUN the skiing was Pilot Peak today.


Earlier in the day, my youngest son had fitting problems with his snowboarding boots, so he sitted a couple of runs. He relaxed on a fire in top of the snow, as Pedro and I skied.
Fritz is a talented photographer - he got these cool pics from the fire. 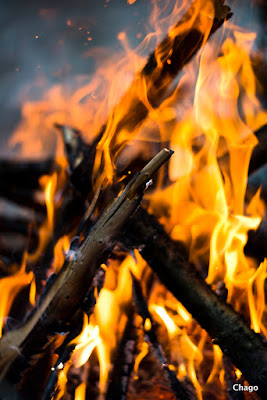 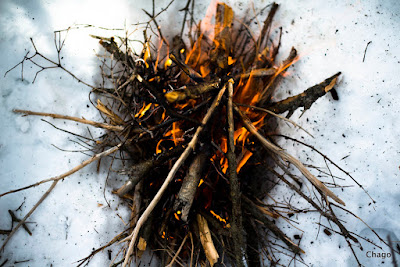 During our skin up it was nice to run into friends such as Ralph going for a quick fix, and Alfred touring with his family. There were close to a dozen other BC skiers at MCS recreating at lower elevations.  In contrast, we were alone for most of the day at Top of The World until early in the afternoon we ran into two snowmobilers, Gary and Roy. These two gentleman were very friendly, and I thoroughly enjoyed talking to them. Gary highlighted that he carries a portable sled in case he has to help extract an injured skier, snowshoer or snowmobiler. Kudos to Gary for his initiative!
Too bad we had to leave somewhat early. Fritz and I had to cook Christmas Dinner. Tomorrow evening is Pedro and Lourdes turn to cook dinner. Below a short video clip as we drop into Pilot Peak road.


The snow depth at elevations below between 6000 to 7000 feet is increasing, but the current ~50-60 cm at 6000 feet makes challenging navigating brush at lower elevations. Most BC skiers skinned and skied today down through the lower elevation brush. However, I am sticking to Pilot peak road until MCS Snotel station reaches the 36 inches of "settled" snow height level.