It has been some time since my last posting on this blog. March was a very busy month with several guiding trips at Wallowa Alpine Huts Norway camp, as well as teaching the last avalanche courses of the season (Avalanche Level 1 and Level III). Besides, my corporate job demanded a lot of me as well during this month.

For your enjoyment I embedded a slide show for one of the early March trips.


Below another photo album for my last guided trip of the season:
This weekend I visited Freeman Peak Saturday and Sunday. The skiing was exceptionally good both days of the weekend, but on Saturday "face shots" were a pleasant surprise for April Pow skiing!

Stability tests and snow observations during Saturday did not produce any evidence of instability with the exception of two small loose snow avalanches at steep areas (L-N-D1-R1-N). But the more than 40 cm layer of recent snow was non-cohesive. With careful observation it could be detected a storm interface below 20-25 cm. The top 20-25 cm of snow consisted of stellar crystals, fragmented particles, rimmed crystals, and graupel - what a cocktail!

The weather on Saturday was unsettled, with numerous snow showers and cold temps (-6 degrees C). Poor visibility negated us from taking any pictures or videos on Saturday. But the next picture taken Sunday morning shows the last run we skied Saturday: 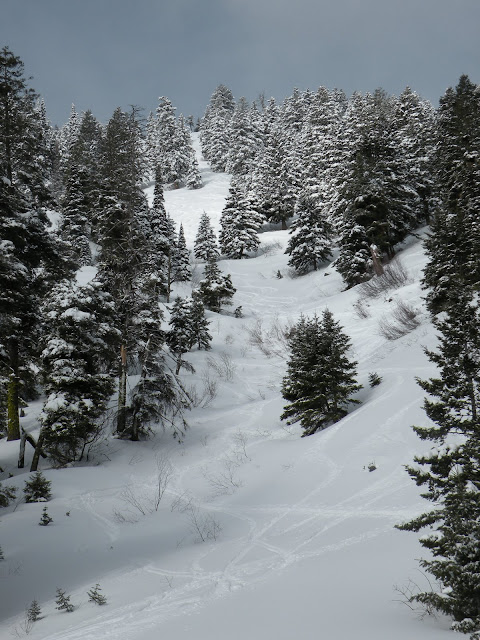 Mores Creek area North and East aspects continue to have midwinter conditions, and the snowpack is very healthy. Judge by yourself after reviewing the next pictures snapped Sunday morning looking into Freeman lower E and NE aspects slopes close to I-21 road: 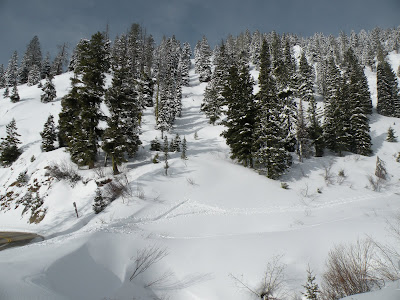 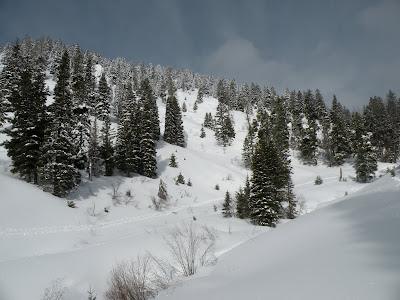 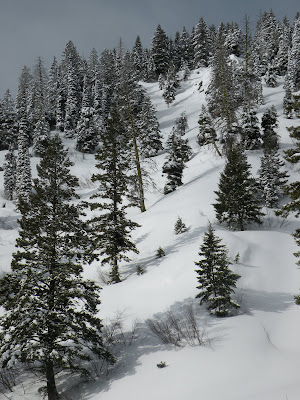 Saturday we were a crowd (Fritz, Joel, Dave, Brandon, Dave, Carlos, and Bill), but on Sunday, Pedro was my only companion. Next a picture of Pedro skinning up and skiing down. 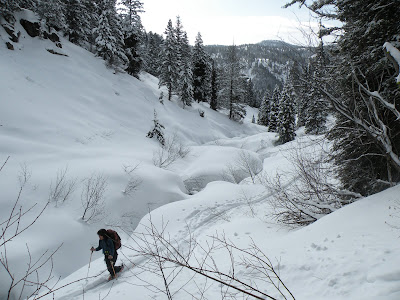 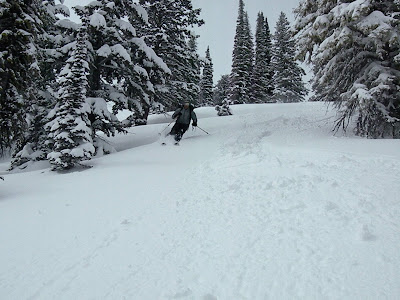 Pedro on the first run of the day, skiing a shoulder run at 7400 feet on the Freeman east-to-west ridge that drops to the headwaters of Mores Creek at 6400 feet. 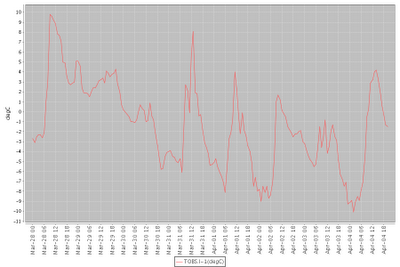 and the sun warming effect densified the snowpack top layers, thus stability progressively deteriorated during the day. Soft slab conditions at E and NE aspects were confirmed with CTEQ2 with propagation potential (PST30/100) stability test results at the 25 cm and 50 cm layers on a 27 degrees slope. In addition, a slope cut at 6500 above a steep roll-over produced a small (15 meter) half a meter deep "soft slab" avalanche as well. Based on the stability results we did not exceeded slope angles above 35 degrees, and exercised caution on steep N and NE slopes between 7000 and 8000 feet.
It was sobering experiencing the vastly different stability due to temporal variability just within a weekend (Saturday & Sunday) in the same slopes! But, with good selection of slopes we found great powder and safe slopes, as shown in the next pictures from Pedro: 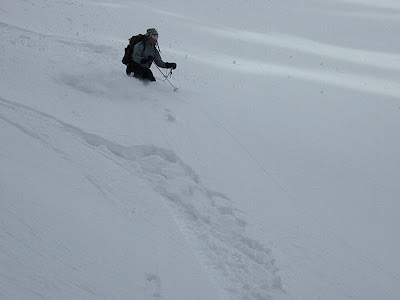 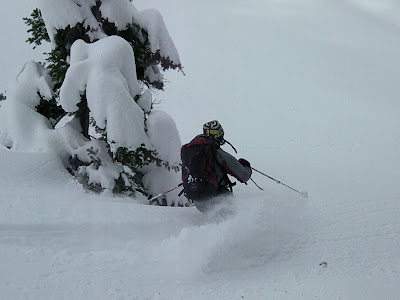 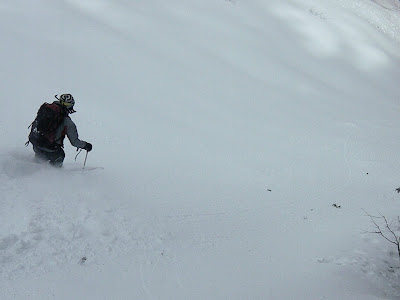 The next two pictures show Freeman Peak East Summit with open meadow skiing at the 8000 feet. Pedro and I left some tracks behind, more obvious with the second telephoto picture. 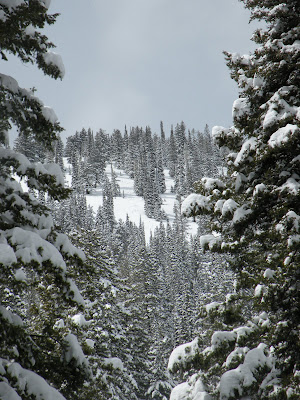 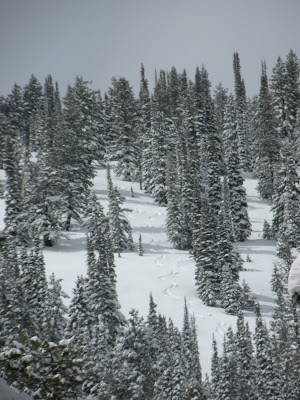 Pedro enjoying himself on the last run of the day:
It was a fantastic weekend of backcountry skiing, but hopefully not the last time we will ski POW this season, particularly when more snow is possible early this week.