The Boise Mountains in Southwestern Idaho were blessed by a generous winter storm earlier this week. The NEW snow has allowed for the 2010-2011 Backcountry Ski season to start with a BANG!
Notice below the views of Freeman Peak from the Western Slopes of Sunset Peak. The second picture nicely document the tracks left by skiers this Friday November 26. Click to download jpeg file to be able to see details. 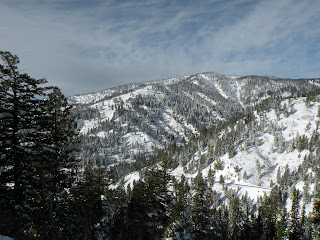 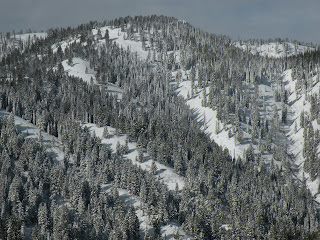 Freeman Peak was the busiest destination at Mores Creek Summit today, although I observed some cars and ski tracks at Pilot Peak, as well as in Winter Corner.

The touring and skiing was invigorating. It feel so good to be able to be in the snow again. After visiting Northern Patagonia and the Central Andes for a second year last August/September, I was getting "itchy" and quite anxious to hit the snow again!

Today started my ski tour from Mores Creek Summit Snowmobile parking area. The idea was to start at the highest elevation possible to avoid the usual early season "jungle" brush, and go for a quiet tour in the Western slopes of Sunset Peak.  The next picture shows my uphill track with Freeman in the background. Not bad snowcoverage for November! 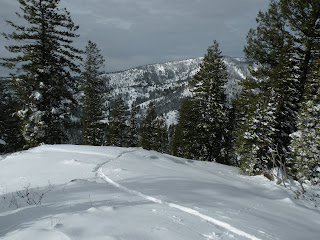 The snotel data for the our area (Big Creek, Banner, and Mores Creek Summits) clearly show the "peak" of 40 inches of snow by last Tuesday morning. Even when the temperatures have been cold, the snowpack has settle to the 25-30 inches depth during the last 3-4 days and permit some fairly good skiing and not too bad "trail breaking" conditions. At the 6000 feet elevation level (Mores Creek Summit) ,the snow depth was 50 cm at the snow course marker. 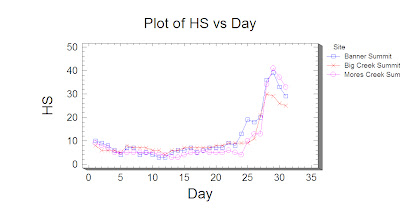 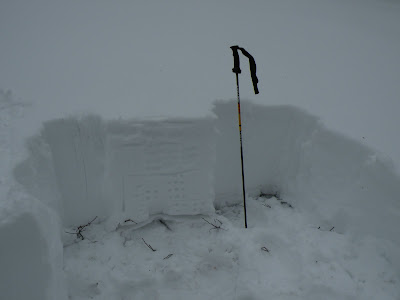 The pit results for the above snowpit are included next. This was a full study pit, typical of the early season, in order to have a benchmark for the rest of the season. 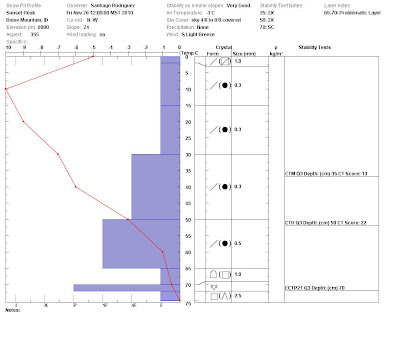 There were no surprises, and as expected there is depth hoar and large basal facets at the bottom of the snowpack, with a rain crust above. The rain crust has another weak layer above with mixed facets. This layer failed propagation test with a "sudden collapse" (SC), although it lacked a clean "slip" plane and compression tests resulted in Q3 results. This layer is of little of concern in Mores Creek summit area due to the type of ground coverage (heavy brush), but there are places at the 7500-8000 feet (rocky and burned areas) where this could be a problem. Pay close attention to this layer in those locations, particularly during "significant" loading events, where this weak layers tend to become active.

The top 65 cm of the snowpack was unremarkable, with settlement and sintering progressing. No other weak layer were identified, and the storm interfaces had moderate & hard compression scores as well as Q3 planar failures.

Near surface facets (NSF) were observed at all aspects and elevations I toured today. This layer was 2 cm thick, very fragile, soft, and low density in nature. If this layer is buried by the NEW snow expected by tomorrow (11/27), it might be possible to have soft slab conditions. Remember the basics (Red Flags!). Be vigilant of this notoriously "tricky" NSF; due to their small size (1 mm) it is very hard to detect during snowpit studies.

Finally, there has been a lot of talk among avalanche professionals and recreationists to make the snowpit temperature recording more less time consuming. I have been using IR Thermometers for 3 years now with positive results. In fact, it was a topic of significant interest during the latest International Snow Scientist Workshop (ISSW 2010 at Lake Tahoe).

I include below data collected today that compares two measurement repetitions for Infrared (IR) and Thermocouple (TC-probe) temperature sensors. The top of the snowpack correspond to the 0 cm depth, and the bottom to the 75-80 cm depth. 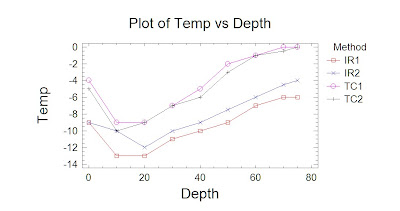 The repetitions were recorded in the same snowpit described earlier in this blog posting. Keep in mind is that it is VERY important to perform a "fresh" cut in the snowpit face, and promptly record the temperature with the IR device, before the temperatures are disturbed by the environment.

Enough about snow science. The next two pictures were the last of the day as I skied back. 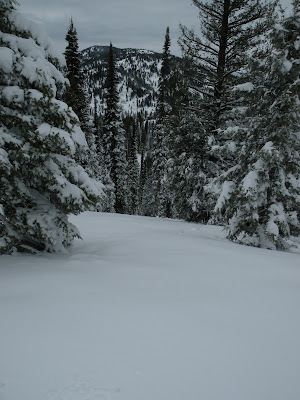 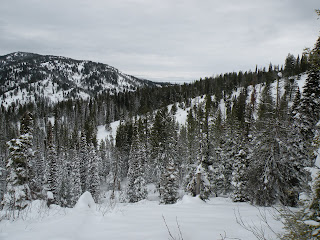 Tuesday, I attempted to drive to Mores Creek Summit with my son Fritz. The road to the pass was closed for most of the day. Below a picture of the rotary plow as we patiently waited for it to clear the road. 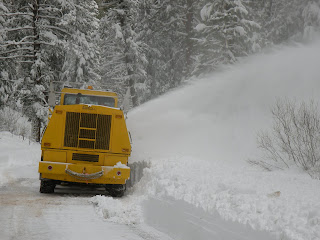 But the plow kept having problems. 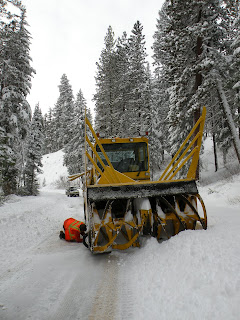 Finally the road supervisor caught with us at Twelve Mile creek, and politely requested us to drive back to Idaho City. After waiting from 8 AM to 1 PM, we gave up and drove home.