It was about time to ski tour at other location in Central Idaho besides MCS. This year I skipped my Colorado teaching tour, and concentrated my efforts in Idaho, with three exceptions, a trip to Alaska to teach a Level 2 at Hatcher Pass,  taught a PRO Bridge Course in Utah, and lead a snow/avalanche science field camp at Soldier Mountain-Fairfield.

A few days ago - I  reminded myself that visiting other ranges with a contrasting snowpack development is very important for the continuous improvement of snowpack assessment skills.
Thus, yesterday I spent the day at Galena Summit. The day was sunny and tranquil with light winds. Skiing conditions were fine as long as you avoided any snow below 8500 feet and sought slopes minimally impacted by solar radiation. Steep terrain can be found at Galena Summit slopes, but there is plenty of terrain with moderate angles for those just getting introduced into backcountry skiing or for those that are satisfied with good pow conditions without having to deal with avalanche terrain. 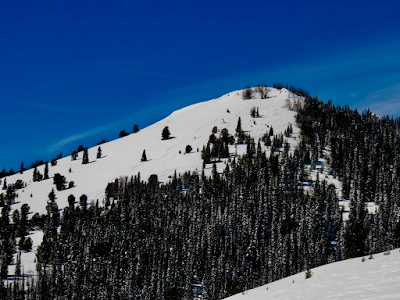 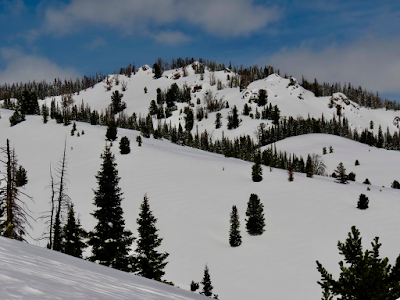 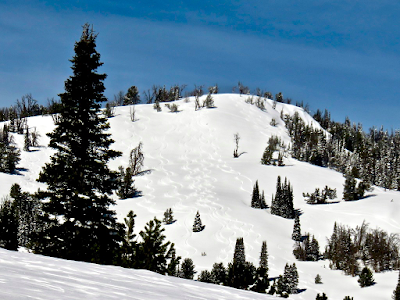 At the end of the day, as we skied back to my vehicle and we drop below 8500 feet in elevation, the skiing became desperate ... it did not matter aspect, or shaded snow, or snow near the protection of trees. Skiing below the 8500 reminded me about a surfing poster at Aquatica (my cousin surf shop in Puerto Rico) which I included below. As I skied down and my skis relentlessly broke through the breakable crust, I was making the same desperate plea the lonely surfer made ...
As usual, you can never get tired by the spectacular views from Galena Summit. The Sawtooth, White Clouds, Boulder, and Smokies ranges dominate each cardinal direction. 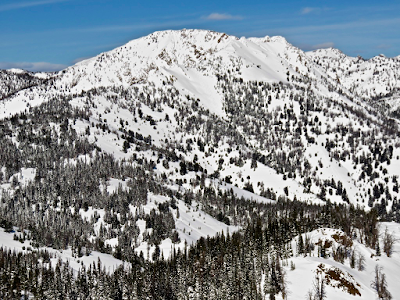 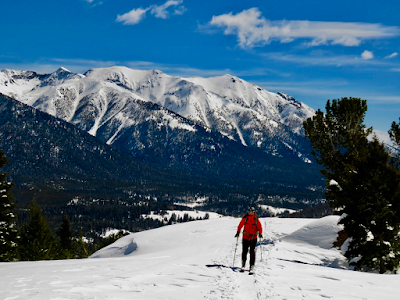 A quick snowpit revealed that the snowpack top 1-meter structure lacked structural weaknesses (slab over weak layer, facet weak layer, a difference in crystal size larger than 1 mm) below the 20 cm depth at the snowpit location (NE aspect, 9100 feet, 32 degrees slope).
Storm interfaces can lead to storm slab avalanche problem if a less cohesive interface is buried by storm snow.  The next picture for Galena Summit top 20 cm of the snowpack shows two storm weak layers as lighter lines in the "thin slice" due to their "intrinsic" lower density.
The two storm interfaces identified might be too shallow to be of concern for most of the terrain around Galena Summit. However, in steep terrain with large acreage or terrain complexity (multiple avalanche paths, cliffs, terrain traps, etcetera) a soft slab release at a depth of 20 cm can entrail enough snow to threaten a skier. Last weekend (Sunday, March 18, 2018) a similar storm slab with a depth of 20 cm was triggered by a skier at Mores Creek Summit's steep terrain near Whoop-Em-Up headwaters area. This small skier-triggered avalanche resulted in the loss of a ski and a light injury to the single victim.

The topmost 20 cms showed two storm layers (or interfaces) failed easily during "tilt tests".
Tilt tests efficiently identify fracture planes during soft slab conditions. When soft slab conditions are present it is often hard to reliably perform compression tests (CT and ECT) without negatively impacting the column. That was the case when assessing the topmost 20 cms at Galena Summit this Monday, as well as last week at MCS. For soft slab conditions, tilt tests become the primary tool to identify fracture plane failures. The tilt test consists of tilting a section of a column by 5-15 degrees and gently "hitting" with the hand the shovel blade from underneath.

Storm slab instability unlike persistent slab, last a short time. The storm weak layer promptly go through rounding and sintering metamorphosis. It might not make sense to spend time writing and commenting on this problem, considering that the current temperate temperatures will promote the sintering of the storm weak layers by the time most readers read this post. However, this might serve as a "teachable" moment to make backcountry users aware that storm slab instabilities can be assessed with tilt tests as well other less popular tests when conventional compression tests are challenged by pow and soft slab conditions. Avalanche educators (avyscience.com) have continued to add valuable additional stability assessment tools to recreationists as we learn more from Avalanche research. Thus you must ask yourself ... when was the last time you refreshed your avalanche knowledge? Are you aware of all of the advancements in snow/avalanche science? Are you current with the latest stability assessment techniques for snowpack structure, stability tests, and standardized documentation?

The next sample of pictures illustrates a prevalent type of avalanche I observed at Galena Summit's nearby peaks. I found interesting that many of the avalanche releases were located at or near rocky steep features. I do not have enough information to classify these releases, but based on the snowpack history, propagation, and apparent depth, it is reasonable to guess that these releases are associated with a persistent weak layer. 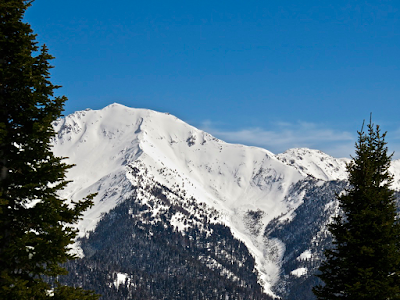 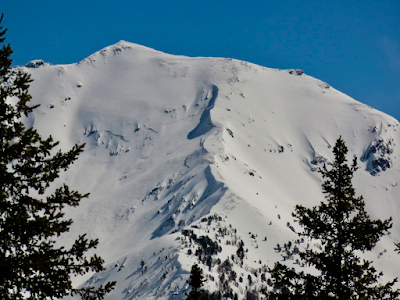 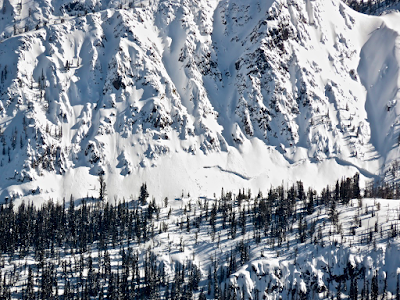 There are some many other places besides MCS, Galena Pass, and Copper Mountain that offer fun skiing and cool tours. As spring advances, postings from other areas besides MCS will start to trickle in. 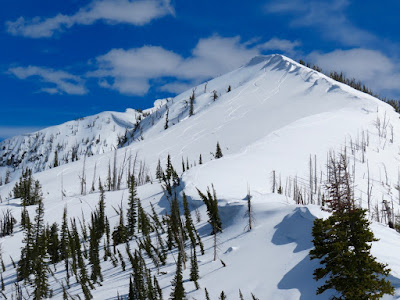 Above a sample of little-known area with complex and amazing ski terrain. I will be visiting it during the next few days.
Posted by Chago Rodriguez at 5:15 PM