Sunday, March 4 we completed the 3rd Avalanche Level 1 course at Mores Creek Summit. The snow conditions were fun and we had a dynamic snowpack that provided lots of opportunities to hone the course participants stability assessment skills.

Jeremy and Brendon successfully completed the Avalanche Science's Level 1 course. They demonstrated that they can produce a travel plan, generate avalanche risk assessment using the Avalanche Conceptual Model, and reliably complete a full rescue of a single victim buried at 1.2 meters in less than 5 minutes, earning them a certification in addition to their AIARE diploma. 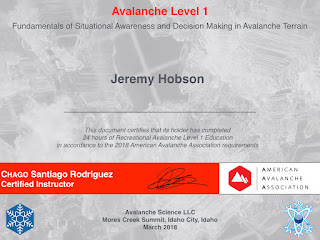 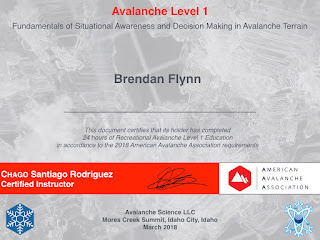 During the three days, we skied some of the best lines at Winter Corner, Summit Creek Glades, Lamar Ridge, and Whoop Um Up Steep headwaters. The snow was consistently good at all elevations and aspects.
AVIL120180302 from Santiago Rodriguez on Vimeo.

Last weekend the snowpack conditions were ideal to observe weak layer rounding and sintering of precipitation particles responsible for a "storm slab" problems at elevations below 7000 feet. At elevations above 7500 feet, the storm slab continued to be reactive, with CTEQ1 results at 30-35 and 60-65 cm depths. Colder temperatures (-10 Deg-C) slowed down the rounding/sintering and settlement of the snowpack. In contrast, at 6100 feet there was as much as 10 cm of settlement (densification, NOT whumpfing) in the snowpack.
At shallow lower elevations, the early season depth hoar continues to be reactive to stability tests, but not at mid elevations (7000 feet). Above 7500 feet, slopes with north component continue to produce evidence of instability for propagation at the 1-meter depth (from the early season depth hoar event).

The course participants were challenged by the variable distribution of wind and deep persistent slabs but were able to select terrain in excess of 30 degrees to keep pow skiing exciting. Evaluation of storm slab became routine with their new found knowledge and stability assessment skills.
There have been in Idaho a number of avalanche incidents during the last few days. Below I share a picture from a skier triggered avalanche from last Sunday. The party involved want to remain anonymous. Fortunately, the two persons involved were not harmed by the avalanche. They recognized their mistake and will be taking an avalanche course soon. 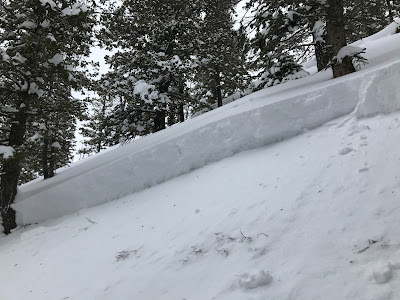 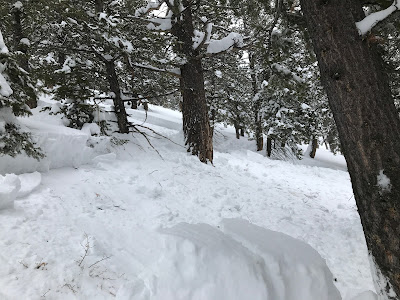 The avalanche in the above picture did not occur at MCS. Apparently, some assumed it had. I did not provide details to protect the anonymity of a friend. For reference, I include the information shared on FB:
This avalanche occurred to somebody I ski with in the backcountry. My friend was skiing with another person last Sunday. I should highlight - my friend is an experienced skier and knew they entered avalanche terrain. But my friend was skiing with another person that went the wrong way and triggered the avalanche at a low 30's slope with a lower elevation northerly aspect. The person that triggered the slide hold to a tree, and was unharmed from the D2 slide.

The avalanche failed at the facet layer below the new snow. The distribution of this persistent slab is variable. I observed it last Friday at Sunset Peak burnt areas characterized as snow fetching areas due to the recent NE winds. These low elevation shallow areas are NOT where we expect them to be! Skiers need to visually identify snow transported areas (ablation and accumulation) and continue checking for what's BELOW the new snow. Hand pits baby, hand pits.

This posting should encourage many to finally participate in an avalanche course. There is finally an avalanche education provider close to Boise.
There are no excuses anymore such as that providers are too far away in Stanley and McCall. At the same time, the courses at Mores Creek Summit are very effective due to their small group size and availability of terrain less than 20 minutes from the Idaho City classroom.

I would like to take this opportunity to thanks the crew of IDT-Idaho City for their fabulous job in extending the pull-out at the Winter Corner location. This was a busy weekend and your job kept skiers safer and made driving easier for drivers using I-21!
This is a great example of IDT being pro-active, and Stuart and his crew deserve a lot of credit. The conversations about winter recreation and parking needs before the snow came in are paying off! Furthermore, it was encouraging to notice that backcountry skiers are using the parking area in a manner that maximizes the pull-out parking capacity. Kudos to all!
Posted by Chago Rodriguez at 6:39 PM