Winter is reluctant to release its grip at elevations above 8000 feet. Yesterday, May 9th, I skied cold-dry consolidated snow. I skinned to Copper's East ridge (8840 feet) via a "horseshoe" ridge to the south of the standard route. In the topo map the alternate route is shown in green, and the standard route in purple.

Ski crampons for the first 500 feet rewarded me with efficiency and safety while climbing out of the creek. Once I got to the ridge there was no more need for the ski crampons. At about 8000 feet I was breaking trail on NEW snow. I was exhilarated -THERE IS GOING TO BE GOOD SKIING! And I accelerated from a leisurely 1200 ft/hour climb to about 2000 ft/hr.
. 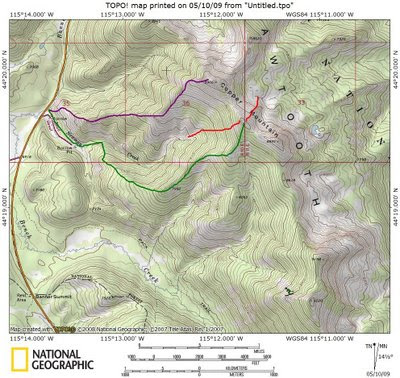 .
You might remember the next picture, it was posted 10 days ago. This NE aspect slope is highlighted in red in the topo map included above. As I promised then, I came back to ski it. It has been a few years since I last skied Copper's East Ridge, and it was time to get re-acquainted.
. 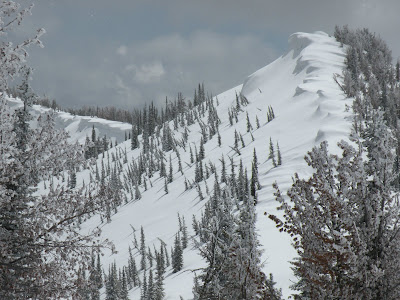 .
The picture below gives a view farther to the East to next high point along the ridge crest (Point 8895).
. 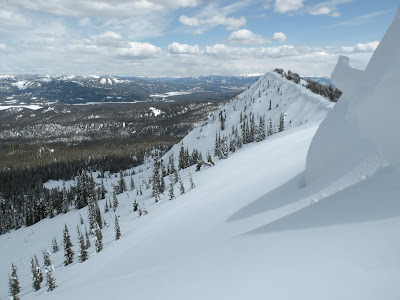 .
I did four laps on this slope. The skiing was superb! The top 800 feet were sweeeeet!
.
Below the 8000 feet level at NE aspects, the snow was heavier and breakable crust was ready to wage battle, and I decidedly avoided this "instructional" quality snow.
.
East aspects between 8900-8000 feet were heavy and manky. I watched two "tele" skiers getting spanked by "Gestapo" snow while skiing on an East aspect slope between Copper and the East Ridge where I was.
.
There was another larger group at Copper skiing the NE chutes at the top of Copper, but from my vantage point it was not possible to see the action.
. 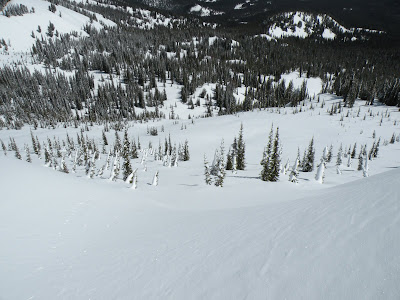 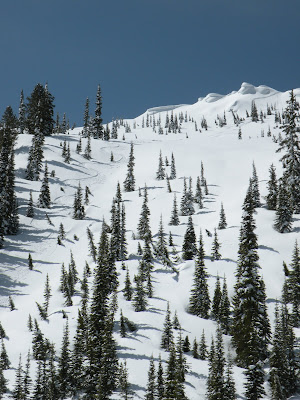 .
The picture above shows the first line I skied. Notice the start of the first ski run of the day - the ski track cutting below the cornice.
. 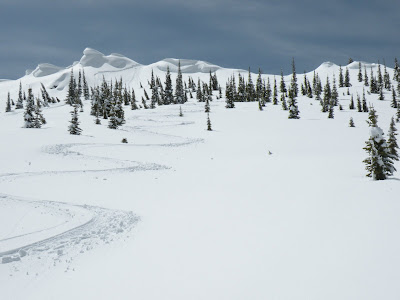 .
I went back up for seconds! This picture shows the ski track for the second run.
. 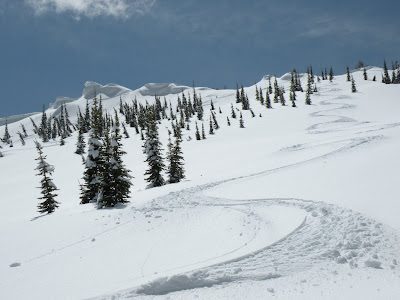 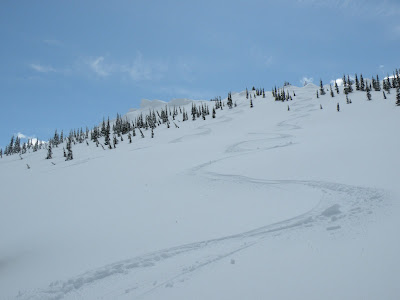 .
And finally the four and last lap on this NE aspect slope. Time to go back and ski corn on my way back to the car.
.
It was an spectacular day. The views were fantastic, check the next pictures with various views of Copper's East Ridge area:
. 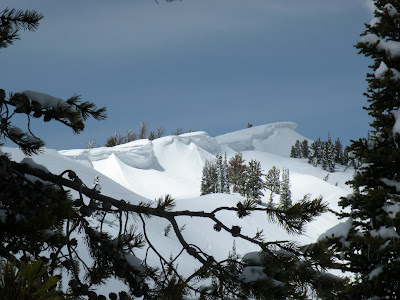 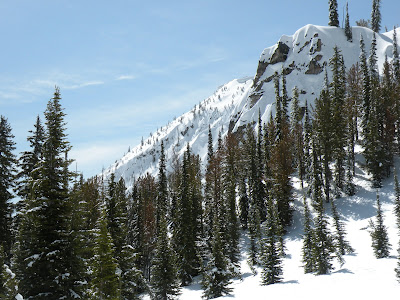 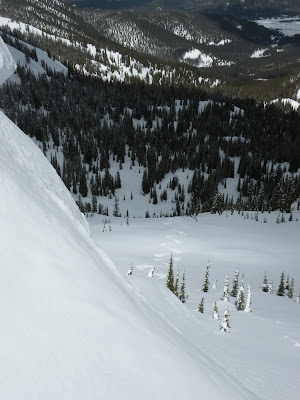 .
My first set of tracks from a cool vantage point!
. 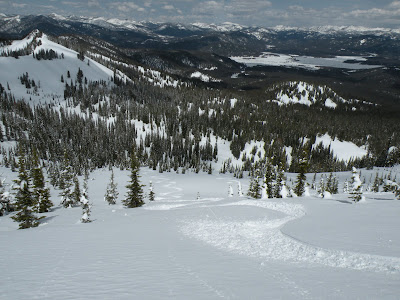 .
Check the texture - hard to believe we are still skiing soft snow.
. 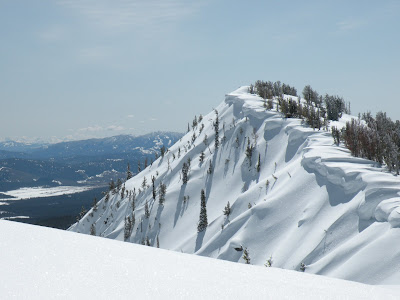 .
The next set of pictures are from Copper Mountain as I approached the hill from the south via the "horseshoe" ridge:
. 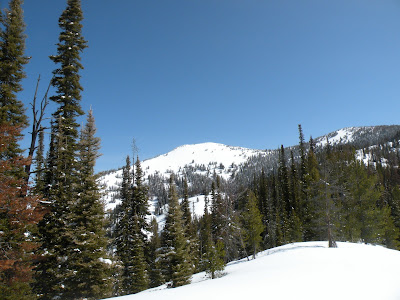 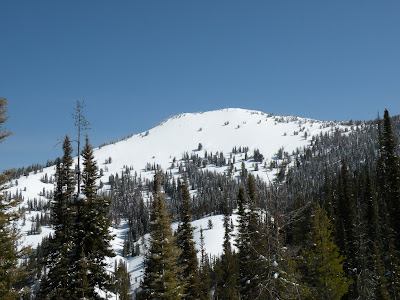 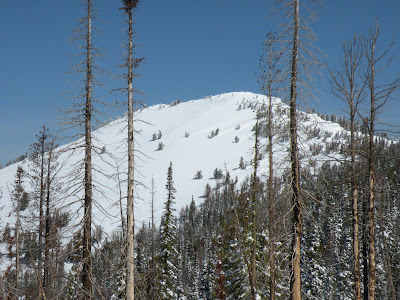 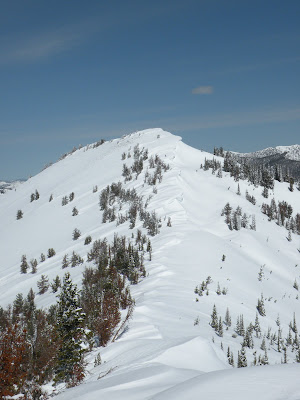 .
The summit of Copper Mountain is the high point along the ridge in the picture above.
.
The next two pictures are from two other areas at Banner summit where excellent ski touring can be found. They are located south of Copper Mountain. The first picture shows the N/NW aspect of 9220 Mountain. To the right in the distance Bear Claw basin can be identified. The next pictures zooms into Bear Claw basin. There are two posting on this blog for Bear Claw basin. Check them out - this area is truly magic.
. 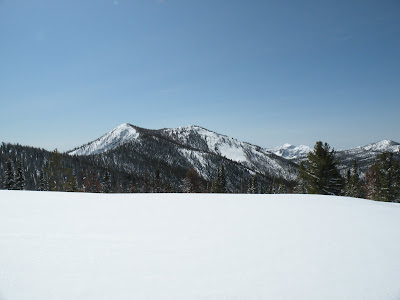 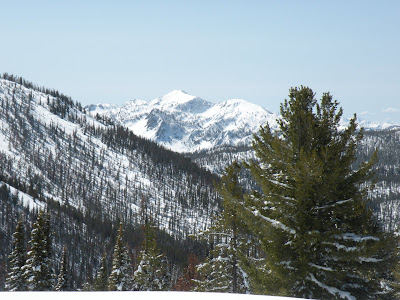 Prior to my first run I evaluated the stability below Copper's East ridge cornices. Stability tests results provided no evidence or signs of instability for the new snow at the north-\east aspects at the 8800 feet level (CTH, no structural weakness at top 1 meter, lack of shear energy, and no propagation propensity).
As the day warmed up (~2 PM), east aspects started to show signs of instability. Notice the small natural wet slide in the next picture.
. 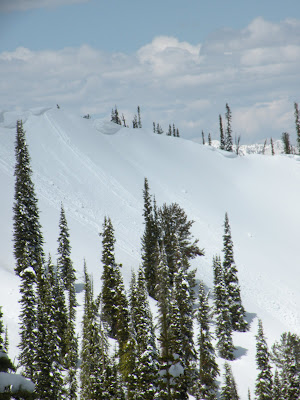 .
The NE slopes I skied were not affected by the sun warming and relatively cooler temperatures. No free water or development of melt-freeze layer was observed at N and NE aspects between 8900 and 8000 feet.
.
Around 3:00PM, I descended Copper's East Ridge high point (8840 feet) on a west facing slope. Then climbed back to Copper main ridge and skied down on a South slope to the bottom of Bench creek. The solid freeze from the last two nights was enough to keep the corn in optimal condition. And needless to say, the corn sking was phenomenal.
Posted by Chago Rodriguez at 8:35 AM