Another day of great skiing at Top of the World - Pilot Peak! Not very often I go into "Yo-Yo" skiing mode, but today I made an exception.
The ski conditions were quite good. The top 20 cm of the surface snow were low density and very soft due to the formation of near surface facets. Cold temps overnight due to a clear night sky favored radiation losses from the snowpack surface. The cold snow surface (-9 Deg-C) relative to the warmer snow 20 cms below the surface (-6 Deg-C) resulted in temperature gradients in excess of 1 deg-C per 10 cm. These temperature gradients favor facet crystal growth or facetting, thus the snow is less cohesive due to the lack of grain bonds between snow crystals. Facets crystals formation does not result in bonds between crystals, making that type of snow grain cohesionless.

However, the snow between 20 cm and 50 cm at Top of The World - MCS (8000 feet) is progressively settling due its weight and the rounding of snow grains. Temperatures deeper in the snowpack are fairly uniform at approximately -4 deg-C. The lack of temperature gradients favored the rounding of snow precipitation particles (stellars, plates, columns), where rounded particle pack more efficiently due to lower surface area per unit of volume.

As snow precipitation particles are rounded in addition to the constant action of earth gravitation, the grains are "squeezed" closer together. This process is called settlement of the snow, and it is just what happened between december 24th and December 25th, reducing the so much FUN deep ski penetration, or what we like to describe as deep POW skiing. Once the snow grain are in closer contact and in absence of a temperature gradient - then grain interfaces or necks are formed through a process we call sintering. The formation these bonds between snow grains form a skeletal structure that add hardness to the snowpack.

The snowpit profile for Top of The World included below illustrates the progressive hardness of snow from its surface down to the 80 cm depth. 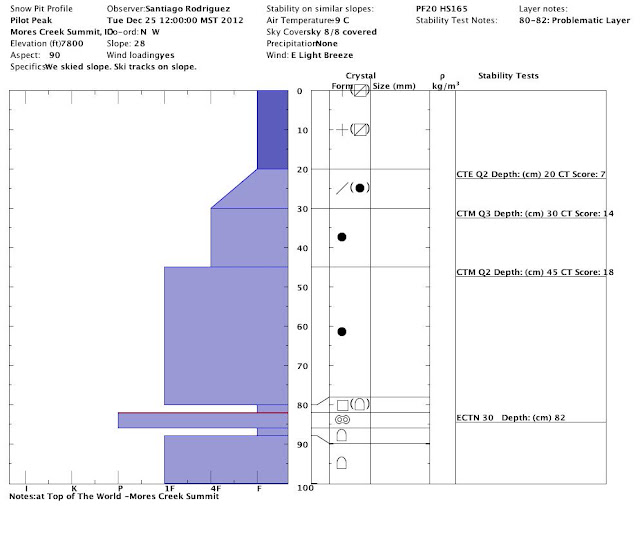 The only layer of concern for December 25th was the buried facet/crust. Stability test results at the 20, 30, and 45 cm did not produce results for ECT (low probability of propagation) with generally moderate results for trigger (CTM) and slip likelihoods (Q2). No signs of instabilities were observed (whumphfs, cracks, natural avalanches, positive ski cuts in steep rolls, ...).

As snow continues to pile up it becomes increasingly hard to impact the facets above a crust buried 80 cm at MCS. This layer structure seems to be more reactive at aspects with a northerly component. Aspects with a E to S components do not produce ECT or PST failures. It is a good idea to continue to carefully monitor this facet/crust layer to avoid being caught by surprise, and have to deal with an angry deep slab with a 80 cm crown!

Christmas Day at MCS offered great skiing, but there were very few BC skiers/riders. One party headed over to Sunset, and there were two other parties at Pilot Peak side. It is likely that one of the parties was Mark (last year avi l1 student) touring solo, I could recognize his uphill and downhill racks at the hill.

There were some tracks at Almost Top of the World, but the first bowl was trackless. I was surprised about how little visit MCS had during the last two days.
Out of curiosity I decided to ski down a spinal ridge that drops into the Pilot Peak road at 6400 feet. That was a very BAD idea! Below 6800 feet, the brush becomes problematic, and the risk to injury becomes too real. My strong suggestion is to continue exiting via the Pilot Peak road, after skiing down through Pilot Peak South Meadows above 6800 feet of elevation.

It will take at least another half a meter (1.5 feet) of dense snow to make skiing viable through all of the routes we like to ski down to the pull-outs where we park our vehicles.

I realize the Pilot Peak road is currently somewhat "instructional" for BC skiers/riders during downhill riding due to the snomobo trenches, tracks, and bumps, but it certainly beats the hazardous brush. However, I know Greg (groomer for the snowmobile association) will read this note and will be more than happy to groom Pilot Peak road ASAP.

Feliz Navidad!
Posted by Chago Rodriguez at 8:10 AM