2012 final sunset basked my faced for its last time near Big Creek Summit.
Monday was a tranquil and sunny day with very colds temps - my toes never warmed up, even after completing five non-stop climb/ski loops! The day started with -12 Deg-C temps and warmed to -5 Deg-C. We were glad to be skiing a WWS aspect, the radiation of the sun was invigorating  and the views to the South were breathtaking.
Ski lines with a south component offered the best ski conditions with up to 30 cm of diurnal recrystallized snow. The facetted crystals at sunny slopes are warmed during the day above the relatively colder snow 20-30 cms below the surface. The resulting gradient between the surface and deeper snow provides the fuel to drive facet growth during the warm sunny day where temps do not exceed the 0-Deg C point.

During the evening radiation cooling of the top surface makes is considerably cooler than the crystals deeper in the snowpack (20-30 cm), and the faceting process continues unabated during the evening. Since the direction of the faceting changes twice per day (day & evening), this type of snow is called diurnal recrystallized snow. These are many words to describe good skiing snow, even when we have not seen precipitation in a week! The next clip shows my dear friend John enjoying himself while skiing diurnal recrystallized snow..


At northerly and shaded aspects the snow surface was mostly "near surface facets" (NSF) above precipitation particles. These type of snow is more dense, but is a close second to recrystallized snow in terms of ski quality. below a clip of John skiing NSF in top of old snow.

Monday BC Skiing was a great closure to a fantastic weekend of ski touring and avalanche instruction at Mores Creek Summit and Copper Mountain. Sunday evening avalanche students as well as instructors for SnowGeek and NSP wrapped up an Avalanche Level 1 course with a delicious dinner at the Longhorn Restaurant at Crouch in Garden Valley.

Longhorn Restaurant & Saloon
This avalanche level 1 course provided an avenue for participants to provided volunteer work for local non-profit organizations in exchange for avalanche education. This course was very successful and we expect to continue making available to the winter backcountry community.

The classroom session was completed Friday at Boise. After 10 hours of sitting in a classroom, the next day we were happy to be skinning up Pilot Peak road.
Saturday was busy with many rescue drills and snowpit work in the field. We did not wanted to impact other recreationists experience at MCS with the class, thus we spent the day at a meadow that hardly ever sees skiers/riders. This EES aspect meadow at 7600 feet located in the Mores Creek drainage and tucked between Pilot and Freeman peaks is a fun area, and above all has avalanche safe terrain that allows to practice rescue drills without concerns (e.g. lacks steep terrain).

The snowpack at the location we played and skied is summarized in the next snowpit. At this elevation and aspect the results for propagation likelihood were moderate (PST 60/100) at the layer of concern buried 60 cms below the surface. This facet/crust layer deserves to be carefully examined when skiing steep terrain above 7200 feet. 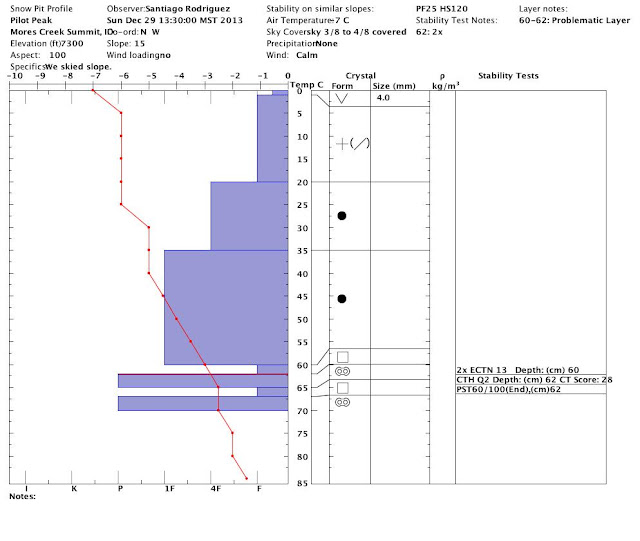 We finished the day at Mores Creek Summit (MCS) by skinning from Mores Creek drainage back to Pilot Peak Road.  Once in the groomed road, students and avalanche instructors skied back to the parking lot at MCS.

By the way - we are grateful to Greg's nice grooming, it felt like skiing the cat track of a ski resort. Greg is the Boise Snowmobile Association trail groomer. This is a great example where skiers greatly benefit from snowmobile initiatives. The return of BC skiers to the parking area is made safer by the grooming, allowing intermediate and beginners skiers to enjoy Pilot Peak. Most years it is possible to ski lower angles slopes back to the road, but the lack of snow below 7000 feet has force skiers to use the Pilot Peak road as the main route up to Pilot Peak higher elevation slopes. 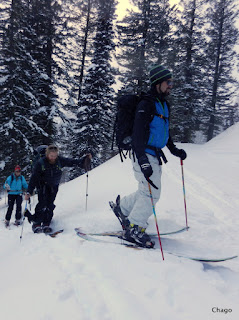 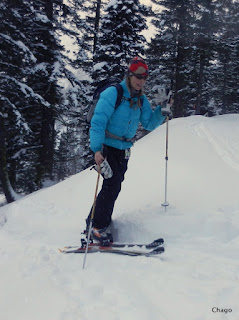 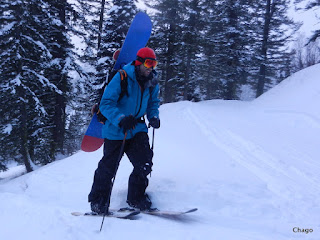 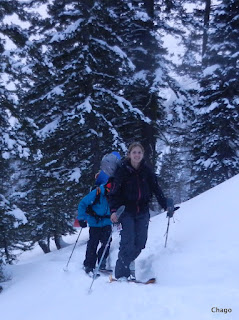 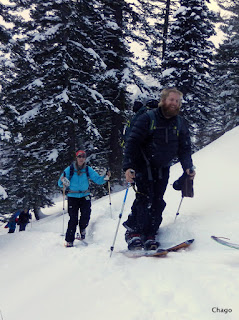 Sunday, the last day of the AVI L1 course was sunny, windless, and cold at Copper Mountain south ridge. The skiing was superb at all aspects with old precip snow capped by NSF at northerly aspects, and fabulous recrystallized snow at aspects with any south component. Between avi instruction we were able to loop 3 runs and satisfy the crave for soft turns.

Below a the snowpit+ profile with stability test results for a west aspect slope at 7600 feet. 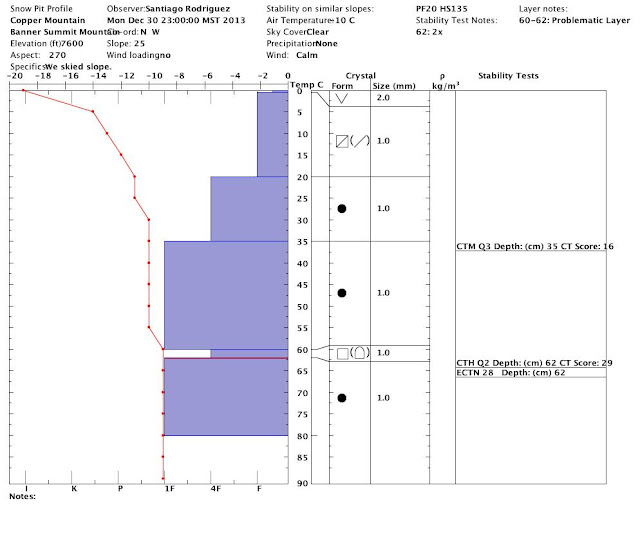 Similar profile was observed for a NNW aspect slope at the comparable elevation (7800 feet), where the snowpack was just deeper with a depth of 180 cm. The stability test scores were similar at the 62 cm layer, with hard compression scores (low likelihood of triggering fracture), low propensity to fracture propagation, and moderate slip likelihoods. It should be noted that several pits were done, and one group of students experienced a Q1 score at the 62 cm layer.

The principal reason for sharing the SnowPit+ results (profile, test results, and stability test scores) of three popular backcountry skiing areas is to illustrate how much variability exists in snowpack structures in our area. However, it is surprising that the concerning layer for every one of these areas (MCS, Banner Summit, Big Creek) are buried close to the 60 cm depth, and that localized steep temperature gradients are present near the weak facet layer. In other words facetting continues, as well as its capacity to alter (weaken?) the snowpack.

During periods of high pressure, such as the one we are experiencing in South West Idaho, we start exploring new terrain and venturing into steeper terrain as the snowpack instabilities subsides. But we need to remind the reader of this blog that this season highly variable and complex snowpack structure will demand of us to carefully evaluate all steep slopes before we commit. The consequences of triggering 60 cm slabs can be severe.

Posted by Chago Rodriguez at 1:48 PM