Today was a chilly day with light to moderate south winds at Pilot Peak. The temps hovered around -3 Deg C at 7000 feet to -6 Deg C at the 8100 feet level.

The snow continues to be thin between 6100 to 7000 feet, although there is now enough snow at Pilot's Peak Road to make skinning and  skiing viable from I21 without having to hike. The great news is that today, the road was groomed! This will compact the snow and create a dense base that will allow snowmobilers and skiers alike to use the road  until we have more snow in the ground for the first 900 feet above Mores Creek Summit (MCS) Pass.

As I prepared to head up, the groomer for the snowmobile association arrived to MCS parking lot. We talked for more than 30 minutes about the many reasons all MCS winter recreationists needs to stick together. He shared stories about the times when snowshoers have been rescued by snowmobilers. I highlighted to him, that a backcountry skier/riders rescue chance of success greatly increases by having acces to snowmobiles from nearby motorized recreationists. What a nice person Greg is. I hope he likes beer, because I would love to buy him a beer and a tasty homemade pie at Trudy's in Idaho City!

The chat with Greg gravitated to the love we share for the Idaho outdoors, and talked about threats to access to the resources we depend so much to fill our souls. Under today's difficult economic climate, state agencies are being challenge to meet the needs of MCS winter recreationists with limited budgets. For example, the plowing of the parking lot at MCS cost money, and there is uncertainty as to what agency or organization is responsible for its upkeep. As you can see this is very concerning, when if for any reason the MCS parking and/or pull-outs are not plowed, we skiers/riders/snowshoers and we snowmobile riders will be unable to access the wonderful recreational resources we have come to love so much.

Anyway, Greg had to go, and I had a limited number of hours so we both headed up to the snowy hills. At the 7000 feet level, snow depths precipitously increased. At Pilot Peak Lookout, the snow was 165 cm deep ... not bad for at all.
It was nice to observe that the top 60 cms of the snowpack with due north aspect at 8100 feet do not have a strong gradient at Pilot Peak That explains the presence of mixed grains and rounding of facets at the 25 cm  and 30 cm weak layer interfaces. No evidence of propagation potential was found with ECT and PST tests. The easy compression test results and "sudden collapse - Q1" are signs that caution and good decision making are required for the current conditions at MCS north aspects . No other  signs of instability were observed today, but visibility was very limited. 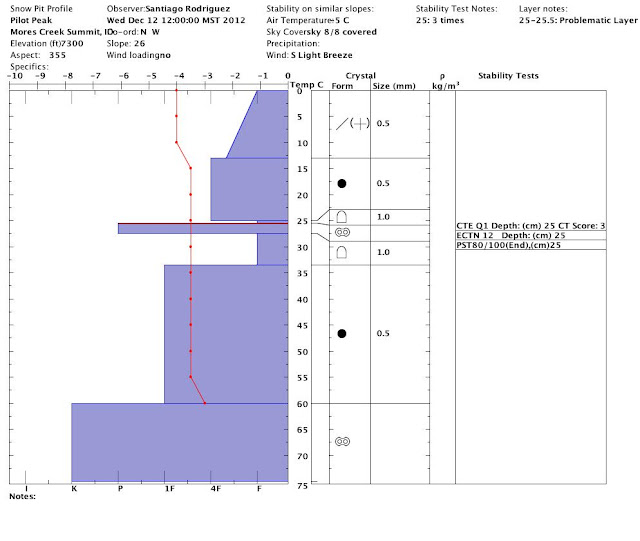 Time was limited today, I had to be back to Boise to pick Pedro (my son) at the airport. But I played for few minutes with some geeky stuff, before skiing back to the road in velvety snow conditions the low angles meadow slopes with south aspect.

Posted by Chago Rodriguez at 11:37 PM