What a FUN day at Pilot Peak! Pictures are worth MANY WORDS, the next easily summarizes our day.

It is hard to beat a day with pleasurable skiing conditions in the company of my son Pedro.

I wish Fritz could have made it. Below a short clip of Pedro enjoying himself at Top of The World bowl - Pilot Peak.


There were other parties ski touring Pilot Peak, but we were pleased to run into one of my peers, Scott a BSU Geophysics graduate student. Same story as last week, all parties used Pilot Peak road to reach the 7000 feet level, when there is sufficient snow to leave the road and skin up to Pilot Peak North and East aspect ski runs between 7000 and 8100 feet.

Needles to say, we skied in soft and creamy conditions. The top 30 cms consisted of a thin layer of surface hoar (SH), with copious amounts of "Near-surface" facets (NSF) and decomposing stellar/fragmented precipitation crystals below the SH. The conditions were typical of cold faceted grains we call recrystallized snow.

Snow surface temps were in the -12 deg-C. The recrystallization of precipitation particles is the result of steep gradients (warm snowpack underneath the new snow and cold temperatures). Snow surface gradients were measured in the 2.5 Deg C per 10 cm, higher than the critical 1 deg c per 10 cm.

Check some of the pics of fragmented/stellar, SH and NSF crystals taken today at Mores Creek Summit (MCS). You had to go deep in the snowpack to fid round grains!
During our stability evaluation we did not detected any evidence of instability. Stability testing at Top of The World and Almost Top of The World were consistent with ECTN and CTMQ2 scores for 30 cm and 40 cm layers at NE and E aspects at 7700 and 7900 feet of elevation respectively. These results suggest a low propensity for fracture propagation with a moderate Trigger and Slip Likelihoods. During our touring we did not find conditions (Wind loading or isolated pockets of shallow/facety snowpack) that would have reduce Trigger/Slip likelihoods to High (CTE + Q1). However, the snowpack is still young and has a relatively shallow depth of 135 cm, requiring careful observation and scrutiny as we toured Pilot Peak.

Early in the morning, we observed at lower elevations graupel. 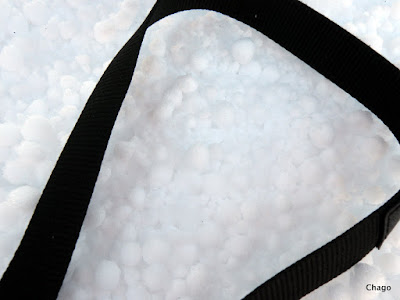 But some of the graupel showed marvelous surface hoar formation - SUPER COOL! Check the next pictures. 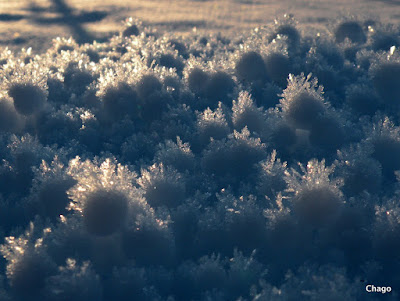 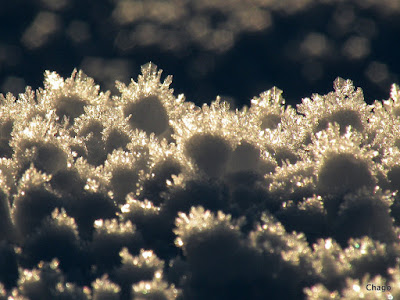 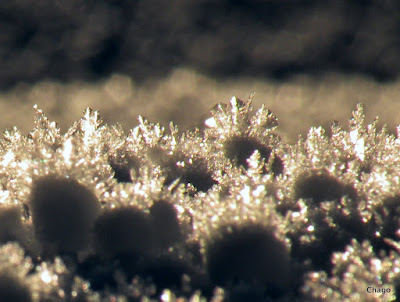 As we climbed up Pilot Peak road, close to a dozen of snowmobilers went by us at various times. With the exception of two snowmobilers w/o backpacks, all snowmobilers carried backpacks with shovel and probe, and half of them had SnowPulse air ballons. I was happy to see so many of them with rescue gear!

Posted by Chago Rodriguez at 10:10 PM