Skiing at Mores Creek Mountain was fun today; cool weather, fantastic snow and great friends!
.
As expected and typical of unconsolidated snow, trail breaking required considerable work. Depending on elevation between 40-50 cm of new snow was sitting on top of a poorly bonded and facetty snow, that kept collapsing under the skis.
.
Below 6600 feet the snowpack showed lots of cracking and collapsing. But at higher elevations the snow was surprisingly non-cohesive, even when the water content was in the ~ 8%. The snow was not sufficiently "Champagne" light to guarantee face shots on every turn, but on the steeper runs, if you allowed the skis to run you could get "near" face shots!
.
During our drive, as we approach Mores Creek Summit, several south facing road cuts showed signs of instability with recent fracture crowns from the the storm snow. However, no natural releases were observed anywhere in the Pilot Peak South, East, and North exposures at all elevations we skied. As noted earlier cracking and localized whumpfing was experienced elevations below 6600 feet, but no fracturing or local collapses were observed between 6600 and 7400 feet of elevation.
.
Stability assessment on the slopes we skied is summarized in the chart included below.
. 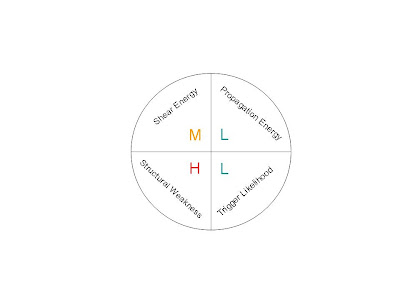 .
This is also a good opportunity to encourage the use of Rose diagrams. Included below today's observations captured in a Rose Diagram.
. 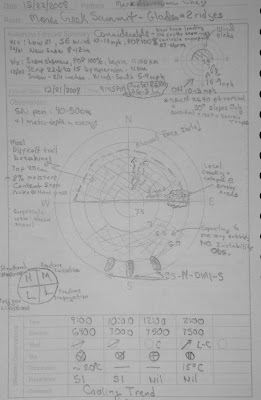 .
On this link you can get a pdf version of the Rose diagram for your personal use:
.
http://santiago.livedrive.com/files
.
The conventions used to record snow observations can be found at American Avalanche Association website:
.
http://www.avalanche.org/~research/guidelines/
.
The snowpack across Idaho mountains have a very WEAK structure. Today we did not find evidence of instability on the slopes we skied, but we were conservative. We did not skied anything steeper than 32 degrees, and for the most part we skied two north-east facing glades with sparse trees.
.
As the snowpack continues to be loaded the triggering likelihood in the Idaho West-Central mountains area will augment, as well as the shear energy, in particular for steeper slopes. Furthermore, time will allow for the formation of cohesive slabs due to sintering metamorphosis. Please do not let your guard down!
.
Feliz Navidad!
Posted by Chago Rodriguez at 8:15 PM