This the last day of the year, and I was itching to go touring today. More importantly, I was interested in checking the snow coverage, ski conditions, and take a look at the snowpack structure.

The snotel data for Mores Creek summit suggest that the average SWE and precipitation might be reached during the next 24-48 hours as a storm arrives during the night. Although the ski lines above the 7,000 feet are fine, the ski out can made more fun (read less BRUSHY!) if average snow depth is finally reached. Last time, as I was coming out of Freeman, a snow bridge collapsed under me. I do not know what was funnier; the visual of last third of my ski/skins encrusted in ice and snow or my "cat like" skin-up from the creek banks! More snow will make the snow bridges above Mores Creek more reliable.
. 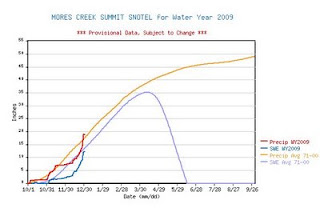 .
I decided to tour Winter Corner since I was limited in time. But I also wanted to get snow pit data from a NNW exposure at 7,000 feet. Below a picture from the top of Winter Corner looking to the north. This ski line drops 1,000 feet, where the top is an open slope and the lower half wide spaced old growth forest.
. 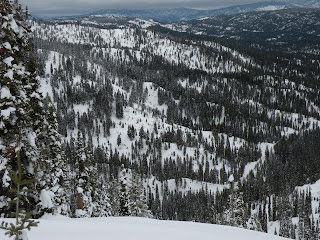 .
The ski conditions were interesting. Skiing in open slopes and meadows was fast (it almost felt slippery) in top of two crusts, where the bottom wind crust was supportable on my Big Atua skis. If you ventured too close to the trees - snow melt from Monday warm temps formed GESTAPO snow, with an amazing level of instructional content! The top melt freeze crust was delicate, and my boards easily broke through. Above this crust there was an ample supply of graupel. The graupel is spread uniformly across the whole hill. I observed the same graupel yesterday (Tuesday) while skiing at the local resort (Bogus Basin). Check the picture of the graupel included below:
. 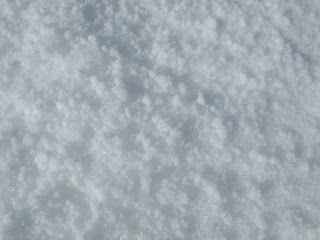 .
The next picture is an experiment with mix results, where I used my camera in top of my magnifier. Kind of Cool! Notice the size of the graupel. The squares are 1 x 1 mm. We will have to pay attention to this potential weak layer with the new snow arriving tonite.
. 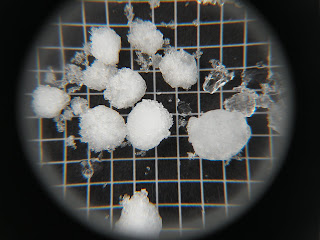 .
The snow pit is chart is included below:
. 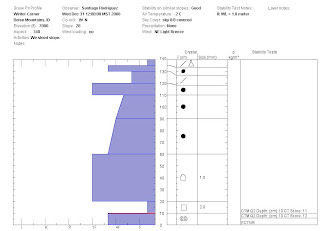 This snow pit is almost identical to the snow pit data shared in this blog for Freeman peak last December 28th. The new 20 cm of snow was today's trail breaking and riding surface. Both snow pits were to the ground, thus the snow depth went from 1.2 to 1.4 meters. 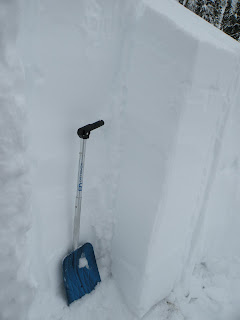 During the two CT tests the full columns were displaced approximately 3-4 cm. See the picture below for the displaced column. The tests were conducted on a 28 degrees slope. It is possible that a similar test on a steeper slope would have fully displaced the column, deserving a Q1 rating. However I rated the energy (quality of shear) as Q2.
. 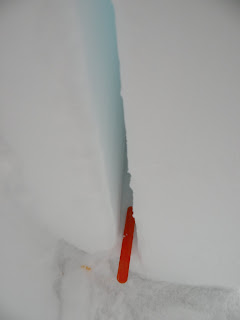 .
Another compression test was conducted but with a column isolated only to a meter in depth. The result was CTH24-Q3 on a storm interface at 90 cm formed during the December 26th storm.

The pause in storms have allowed the snowpack to adjust to the sudden snow loading and warm temperatures have allowed for the the sintering of the snowpack. It is reasonable to expect that it will be more difficult to trigger the weak facet layer buried at 1.3 meters considering its depth, and the bridging effect of the denser snow above. Not many places in Mores Creek are steep enough and at the same time lack the ground cover to be able to trigger deep slab avalanches, but be very picky. I suggest a HIGH dosis of prudence and caution as it is NOW easier travel farther. I expect some of the mini-cirques at the 8,000 feet elevation to be spooky - to say the least.

I will be looking forward to see many of you next year.

Happy NEW year! And may the new year bring many face shots days, and many years of good health to all of you.

Posted by Chago Rodriguez at 5:39 PM