The weather have not been generous since last Wednesday, the last time the Boise Mountains saw snow precipitation below 7000 feet. During the early hours of Saturday March 17th, 25-35 cm of new snow covered the crunchy rain soaked surface layer. This is the first time that Mores Creek Summit get snow after the rain event of the last few days.

Today temperatures dropped during the day, thus the snow had time to loose excessive moisture. The first ski run we did was fun, but during the day, the snow kept getting better and better. The sking became spelndid! Check the next video.


Stability test results from 6500 to 7500 feet at E and NE aspects were consistent, with moderate compression tests (CTM), no evidence of propagation potential (ECTN or PST100/100), and low likelihood of slip potential (Q3). Weak layers identified were soaked with free water at layers 40 and 50 cm below the surface.

The 25-35 cm of new snow was soft, and it was only cohesive at few locations affected by wind (such as picture above). We looked hard for evidence on instability or releases caused by the recent rain to no avail. No avalanches of any type were detected at all. However, we noticed that the surface tension of free water was keeping layers in place. Every weak layer interface above 50 cm failed to produce clean fracture planes. Instead, we found plenty of free water "pooling" into the weak layers. These phenomena is called by avalanche scientist - capillary barriers.

A clean fracture plane was identified at 70 cm (CTHQ2).

We would like to thanks the folks that support honoring Steve Romeo by naming an area of Mores Creek Summit after the creator of TetonAT blog. Below some pictures of for the Twelve Mile ridge south of Freeman's ridge. A blog reader suggested Rando ridge, since Steve was well known as Rando Steve. We love the idea, and we hope "Rando Ridge" is adopted by our BC skiers/riders community. Besides, this area has great skiing, it gets little use, and I am not aware of any particular name used to identify the ridge.

After another wonderful day of skiing, wee were delighted to try at Trudy's her exquisite bread pudding - Yummy! 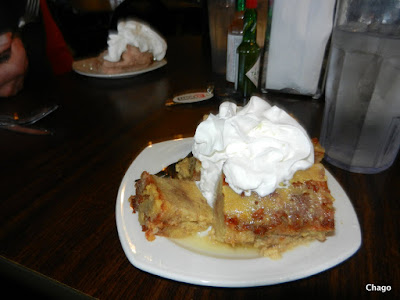 Posted by Chago Rodriguez at 6:35 AM