Get out of Boise, and head out to the mountains! 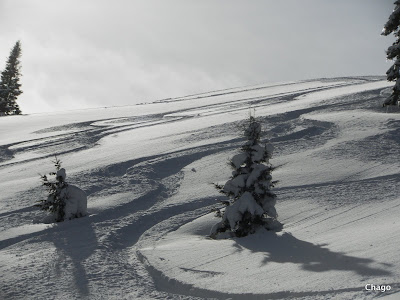 The conditions promise to be equally good this weekend. Lots of skiers took advantage of the great conditions, and we were able to see lines skied from Winter Corner, Lamar Area, and Pilot Peak. We did notice at times more than one skier skiing the same slope. An important safe practice in the BC is to ski ONE AT A TIME! 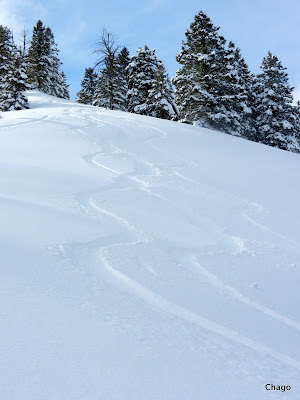 Although temps were below the freezing level during Friday March 2nd, a thin crust due to solar radiation developed below 6600 feet at East/South aspects. The snow above 7000 feet from Easterly to North aspects was remarkable fun. 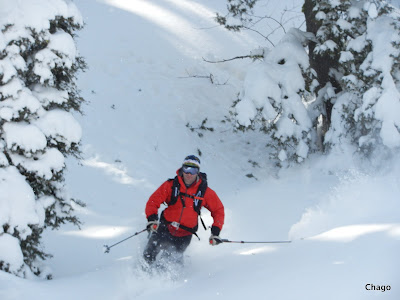 The snowpack at Pilot is getting deep, at 7400 feet it was deeper than 3 meters!  Stability results were moderate at various aspects and elevations, with CTMQ2 at 35-40 cm layer. Propagation test results were negative (ECTPN). We noticed only one small natural release, that has been covered by the new snow. No other evidence of instability was observed by our party.

However, the temperatures are rising this weekend. It is important to remember that we have a complex set of weak layers and wind affected snow, as well as moderate stability results. Raising temps can tilt the scale into higher likelhood of triggering an avalanche, change the low density powder to "slabby"material, and reactivate structural weaknesses. This will require of us to pay close attention to changes in the snowpack structure as we tour/ski at various aspects and elevations.

Have fun this weekend! The recent snow has opened many lines until recently covered by brush.

Ono more note - I was pleased to hear from a local restaurant owner that BC skiers are supporting the Idaho City Community by stopping in town to have beers and munchies. THANKS!
Posted by Chago Rodriguez at 11:11 PM