Sunday was a day of poor visibility, with sporadic bouts of dense fog, and a mix of snow and graupel precipitation. Through out the day I could hear other parties but we never saw each other.

I hoped for clear weather overnight to allow cold temps that would have metamorphose the top 10 cms into even "softer" snow. The snow felt denser that Saturday, but it was still fantastic skiing.

Stability tests at 7000 with East aspect on a 28 degree slope showed similar results from Saturday (March 17th) with CTMQ3 & ECTN scores. Again NO clean fracture planes were obvious, and free moisture was still present. The snowpack depth was 2.8 meters at this elevation ... the corn season is going to be plentiful! 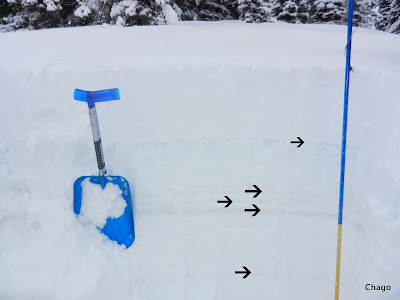 A small avalanche that ran 100 feet or so was visible at the 12th Mile Creek drainage on the South Aspect of Freeman Peak at approximately 6800 feet elevation below a steep rock outcrop. It involved only the new snow (35 cm).

The layer below the new snow has frozen above 7000 feet at South and East aspects, but below that elevation or at NE aspects it was possible for skis to punch through the first layer of wet snow (1st weak layer soak in free water from the rain).

The top 30 cm had temps from -1.6 Deg C (T surface) to 0 deg C (T30) - Notice that the gradient is below the 1 Deg C per 10 cm necessary to result in faceting. Temps for the wet snow at the 40-60 cm were in the 0.3 to 1 deg-C region. I use an IR thermometer with emissivity calibrated to the snow, and thought that somehow it missed its calibration, thus I was quite surprised when the above 0 deg C temps were confirmed with a regular thermocouple probe thermometer. Between 70 and 100 cm the snowpack was at 0 deg C. In other words - the top meter of the snowpack is relatively warm, and it will take few days to reach thermal equilibrium, and for the free water at the 40-60 cm weak layers to freeze. The colder temps forecasted for early this week should help too.

Skiing at East aspects below 7000 feet down to Mores Creek was fun but not stelar, but the coverage was fantastic for the two lines I skied. Skiing the top 800 feet of Freeman East and NE aspects was more fun, but visibility was poor at both selected lines in the open slopes. Now, the skiing at Freeman South shots down to the 12th Mile Creek was phenomenal with great snow for 1400 vertical feet! And the wooded glades provide great visibility. I was not the only one harvesting the good snow at Freeman south shots, there were plenty of GOOD looking tracks laid down. By the way, THANKS for the uphill track - it was a really nice one back to the main Freeman ridge.

If you are interested in watching a video for Sunday skiing, check this post later in the week.

Posted by Chago Rodriguez at 6:51 AM