Sunday turn-out to be a remarkable day to go backcountry skiing at Banner Summit. My original plan was to explore new terrain in the Cape Horn area, up Lola Creek drainage, but the view of Copper South face was as tempting as a perfect coral reef surf break with offshore winds and 6 feet waves, or as tempting as an Argentinean Asada (BBQ) dinner ... well you get the idea.

Thus, we promptly parked at the Bull Trout pull out, exchanged topo maps to the right one - Copper Mountain topo map. We were thrilled to be in the tails of Chris Johnson and his faithful companion, Andrea. No breaking trail for me in the morning!

Temps close to zero degrees Celsius yesterday afternoon below 7500 feet of elevation greatly helped in settling the recent snow, and this process should continue early this week. The snowpack settlement at lower elevations will provide for an adequate base layer for the next precipitation event forecasted later this week.

Temps at the 8000 feet stayed cool all day - right in the minus 4 degrees Celsius, and a light breeze from the NW. The top 20 cms of new light density snow remained fluffy all day long.

Today I snapped only a handful of pictures, I forgot to erase old pics form the camera, and I ran out of memory. But the next video with my ski partner, Steven M., will provide the reader with a good idea about the snow conditions: 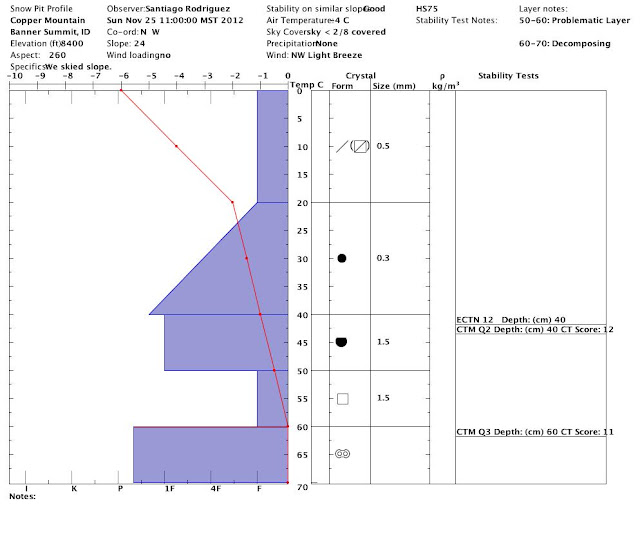 Steep gradients at the top 20 cm of the snowpack resulted in facetting of the new snow, and although the snow came dense, the facetting resulted in outstanding good riding conditions. Not surprisingly, the snow was "right-side-up" due to temps cooling as the storm progressed.

Notice the increase in hardness as depth progressed from 20 to 40 cm.  The old snow layer at 40 cm produced moderate scores for trigger and slip (CTMQ2) and no propagation potential. During one of the multiple compression tests, one failure occurred at the 60 cm depth, with a "sudden collapse", but it should be noted that the sliding plane was very poor, thus I regarded the fracture plane quality as a Q3.

This might sound like indoctrination, but it is important for BC skiers to recognize structural weaknesses in the snowpack. I am sorry to bore most readers, but for the benefit of some I will highlight the FOUR lemons that can be identified in the above snowpit profile:
The fifth lemon was not present; grain size difference between WL grains and slab grains larger than 1.0 mm. A threshold of four or more lemons indicates a concerning snowpack structure.

Some avalanche professionals track the hardness of the sliding plane as a "six" lemon, or snowpack structural weakness. It is worth highlighting that for the weak layer at the 50-60 cm depth, there was not a well defined sliding plane due to facet decomposition of the crust layer at the 60-70 cm depth.

In summary, with the combined results at 40 and 60 cm depths, we assumed moderate likelihoods for avalanche trigger, and slab slip if an avalanche was triggered. Considering the previous moderate likelihoods as well as the structural weaknesses of the snowpack (Four lemons) at the 60 cm depth along with its spatial variability, we only skied slope with angles below 34 degrees.

No other evidence of instability was observed through-out the day; no cracks, local collapse, whumpfing,  nor during testing of steep and small slopes (non-reactive).
Posted by Chago Rodriguez at 9:45 AM