We might not have an abundance of snow in South Western Idaho, but once you get above the 6500 feet, the snowpack has been generous, and there are some great turns to be made. Check the video link included below:

Not only the skiing and the snow quality was great, but I spent the day with Pedro (my son), John T. college kids, and the always funny Mike L. 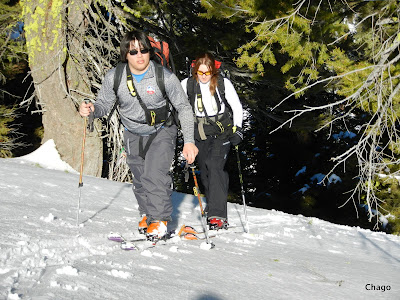 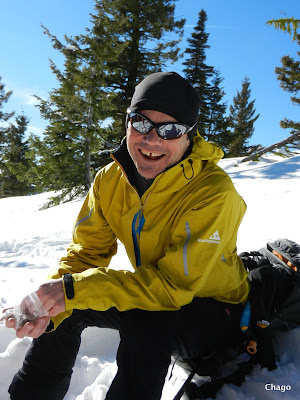 There were no signs that Freeman has been skied after last week storm cycle. And we had the full hill for us today. The best skiing was between 6500 and 7500 feet at protected slopes.

A thick layer of "diurnal re-crystalized" crystals (or Near Surface facet-NSF) between 6500-7500 feet in elevation suggest that the warm temps experienced lately have not resulted in a crust or melt/freeze metamorphosis at this elevation range.

The snow above 7500 feet, even at protected north aspects showed signs of densification or the formation of a crust at NE and East aspects. We observed air temps up to 4-5 degrees C by mid-day. This is very likely the result of the "inversion" due to the mild and tranquil weather, thus somewhat cooler temps at mid-elevations is making skiing fun and forming very skiable NSF crystals, but warmer temps at higher elevations is making the skiing experience "instruktional" with its variety of crusts - Bummer!


Below the snotel temp data for Mores Creek Summit (6100 feet) for the last seven days documents very well the balmy temps (above 0 deg C) since January 2nd. Similar temperature trends can be observed at most snotel stations. In fact, reports froms a Boise friend that skied Copper Mountain last Tuesday confirmed that the warm weather negatively affected skiing there.

Below few pictures we snapped today of the last avalanche cycle at Freeman:

Some of us are very fond of the steep but short chutes 600 feet below Freeman Summit. It is important to remember that these chutes are called by some us 42's for a reason, they measure 42 degrees in steepness. Below a series of pictures of one of the chutes:
Stability test results at East Aspects at 7400 feet resulted in ECTX and CTN results. Last Saturday, the buried depth hoar and facet layers were moist. During the last four days, the buried layers have gained strength as the snowpack has refrozen.

Stability test results at the crown of the Avalanche at 42's slope resulted in CTN scores. It was quite interesting to observe at the crown fracture, the presence of a distinctive layer of what was free water frozen (this is a deep north slope) and with an appearance of water flowing between the slab and weak layer.

Three meters away from the flanks of the avalanched slope at 42s, another nearby slope produced stability results with CTVQ2-50 cm down (DH) and CTMQ1- 50 cm down (DH) scores. This was very concerning, since a CTV represent a spontaneous block failure during its isolation. In other words, considering that 42s aspect has a North aspect, we need to continue to be suspicious of slopes steeper than 32 degrees at protected slopes and with North aspect component.
Posted by Chago Rodriguez at 7:14 AM