The last day of the 2011 year had a conflicted snowpack, with two very distinctive personalities; Fantastic Skiing above 7000 feet and a very unstable snowpack.  It felt like dealing with Batman's Two-Face character.

The skiing above 7000 feet was sweet. East aspects unaffected by wind had 20 cm very low density snow that have experienced some level of "near surface facetting" due to warm snowpack underneath and cold temperatures during the evening.

The snotel for Mores Creek summit seems to be taking some time-off for the holidays (no data available for 12/31/2011), but the Trinity Mountain snotel at 7770 feet, is a good representation of the temps and precipitation experienced by Boise Mountains snowpack above 7000 feet.

Notice in the above chart the cross over of "dipping temps" (red line), and NEW snow (other red line) between Dec 30th and 31st. The overnight and early morning low temps at -10 Deg-C assisted in further making the snow surface "non-cohesive", and as I stated earlier, very skiable! Below a short clip of low angle skiing in a a ridge line.


But the snowpack had also a much dark face.  A very sensitive weak layer was buried under a very cohesive slab with a thickness 50-60 cm. Below a picture of a series natural releases at Pilot Peak on a very popular slope some call "Almost Top of the World". 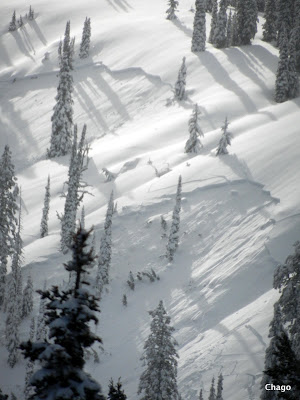 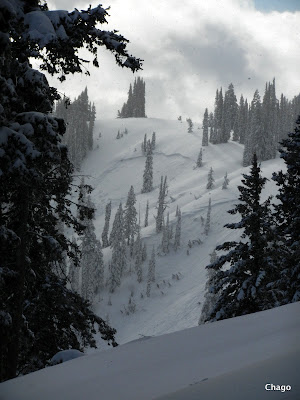 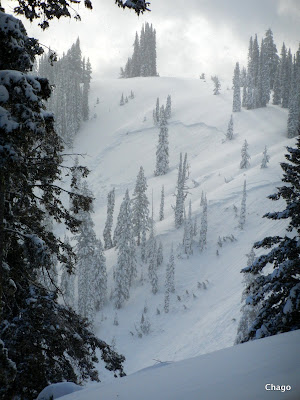 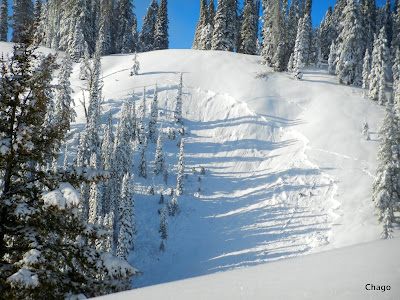 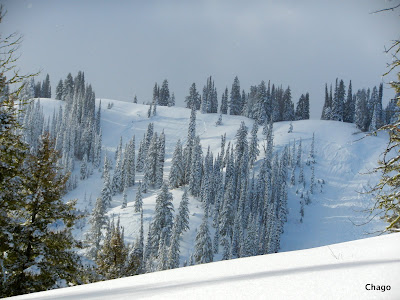 Very large whumpfs were present pretty much everywhere though-out the whole day, and collapses of snowpack in the range of 2-4 cm were not rare either.

A test pit at an East aspect, 7700 feet, 24-26 degree steep showed the following results:
Trigger and propagation likelihood scores are insensitive to angle, but we were surprised with the energetic Q1 scores at the low angles we tested (24-26 degrees). Slip Likelihood (Q1 scores) are a measure of the slip or slide likelihood once a fracture failure has been triggered and propagated in the snowpack. This reflect the ease of releasing avalanches in relatively lower angles. We limited our skiing during December 31st to slopes shallower than 30 degrees!

The snowpack structure we found is summarized next:

With the above snowpack structure it is not hard to identify a WEAK snowpack structure with many elements present in most avalanches:
Thus what are commonly called "lemons", four lemons were detected. The other lemon, relates to thin weak layers (less than 10 cm), but there is a very thick layer of facetted grains. The high reactivity and Q1 scores of the snowpack is most likely the result of a very cohesive slab, but in particular a thick (5+ cm) and pencil hard rain crust right above the weak layer.

As aside note, yesterday, the conditions reminded me a lot about the well documented instabilities caused by capillary barriers, were free water flows within the snowpack until it finds a structure that acts as sponge absorbing water responsible for "wet slab avalanches".

Rain events during December 28th and December 30th heavily soaked the facetted and now buried weak layer with rain. The snotel chart for Mores Creek Summit included below shows the extent rain in the snowpack Notice the precip line (red) augmenting but not the snowdepth line (blue).

It is reasonable to expect that the water soaked basal facet layers will assit in the stabilization of the weak basal structure by promoting rounding, and above all once the free water freezes deeper in the snowpack.


Stability test results for Friday december 30th  by another observer on a North aspect slope at 6200 vertical feet were:
We did NOT observe any natural activity anywhere below 7000 feet. The test results for Friday suggest that evidence of instability was present (High likelihood of propagation and triggering), but Friday's rain soaked snowpack at 6200 feet lacked the elements necessary to make it slide after a failure.

Back to the topic of ski conditions, the lower 500 feet of the mountain require some careful navigation to avoid brush. However the top 1000-1500 feet are skiing incredibly well. Check the next video:

Posted by Chago Rodriguez at 8:38 AM