There is not much to add to this post that I have not stated before. There is very good touring, good turns to be linked, and massive faceting.
.
Yesterday I skied an area close to the 8000 feet level to the East of Pilot Peak, on the headwaters of Whoop Um Up Creek. This area has several well defined slide paths. Below some pics:
. 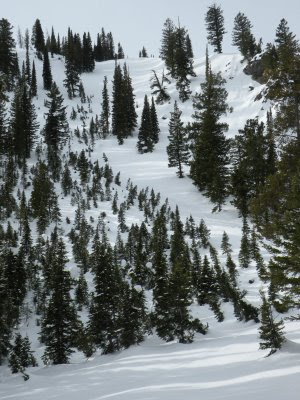 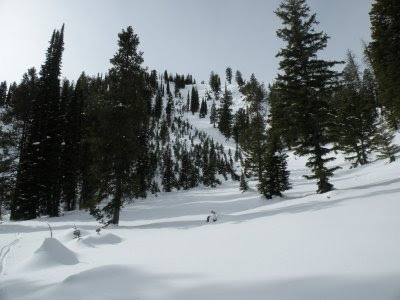 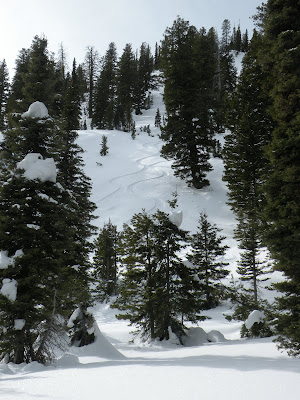 Slopes we skied
.
As we climbed on a ridge north of the popular Pilot Peak runs (The Glades, The Knob, Almost Top of The World, and Top of the World) we noticed many old tracks covered by the new 10-20 cm of recent snow (now resting as a combo of surface hoar and Diurnal Recrystallized snow). It was IMPRESSIVE how much it resembles a skier compacted resort slope. To our delight - we found no tracks on the slopes we visited.
.
While touring we noticed that most of the surface faceting is circumscribed to E, NE and N exposures in open slopes mostly above 6500 feet. It is concerning the significant faceting on starting zones, and wind loading areas. I hope that the warm temps forecasted for this week and/or winds from the next storm will destroy the surface hoar, otherwise there are going be very "touchy" conditions if the next storm dumps sufficient snow!
.
My ski companion for the day, Lynette, was having a great time with the good turning conditions as you will notice in the next two videos:
.

.
This video was filmed bove "Whoop Um Up Creek" headwaters.
.

The second video was filmed at Lamar Creek Bowl (7400-6600 feet). If you have not skied this mellow but wide open and very much FUN bowl, make sure you try it at some point. Just look at any of the Pilot Peak topo maps posted on this blog and look for Lamar Creek. Or study this map:
.

.
We already know that conditions are "high" in stability and "low" in avalanche danger. Several hand pits confirmed this assessment, as well as 2 compression tests at 7900 feet on a 38 degree slope few feet away from a starting zone. CTH (scores 24 & 28)-Q3 were observed at 35 cm from the snowpack top, on a decomposing ice crust with a 5 cm thick layer of facets.

The skiing on the 36-42 degrees slopes we skied was really fun with the very noisy and non-cohesive recrystallized snow. We really enjoyed the "sluffing" on every steep turn. The only caveat is that there were no distinct tracks on the steep sections, thus negating us from the joy of watching tracks as we climbed back up for more!

Posted by Chago Rodriguez at 7:17 AM