This is the first blog post after Christmas Day. And what a Christmas present we received - lots of NEW snow. Today skiing was nice, but the snow was slightly creamier than last Monday. This is the result of NE winds densifying the snow and new snow in the 10%+ moisture content. During my ski out I found the best and softer snow under the protection of old growth forest trees.
.
Some of you are aware, the Avalanche conditions in the Sun Valley area are rated HIGH. My last three visits to the West Central Idaho backcountry show a different picture.The lower elevation of the West Central Mountains compared to the Sun Valley area terrain (Galena Summit, Boulders, Smokey, and Sawtooth Mountains) limited the snow cover early in the season. And at elevations above 7,00o the weak layer is mostly interlocked with the ground cover.
.
Today as I skinned up to Freeman via the East ridge, below 7000 feet , it was impossible not to notice the many local collapses and cracks. Below a picture of one of the many cracks from Today.
. 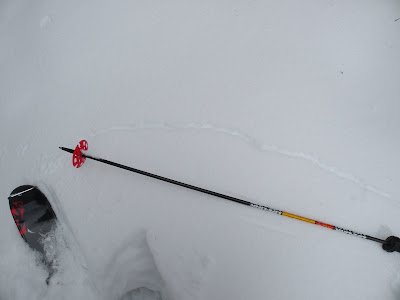 .
Above 7000 feet I did not observed any more local collapses and crack propagation. It is likely that the reason behind the collapse below 7000 feet is the more than 2 feet of snow in top of brush and ground cover. Snow is just sitting in the "air" until collapsed by trail braking.
.
Below a picture of today's snowpit at 7200 feet. The pit aspect was NNE, and it was located on Freeman main East ridge, well below the ridge to avoid wind loading effects. The pit location was selected away from trees. Notice that the pit location was not steep, only 25 degrees.
. 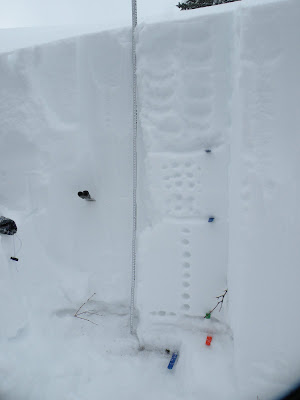 .
I was expecting a more complex snowpit. That was not case as you can see in the "Full study" snowpit data included below.
.
. 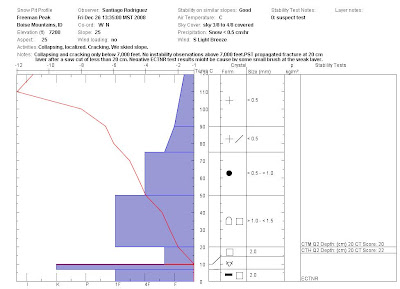 .
I would like to remind the reader that the above pictures and chart are magnified by "clicking" on them!
.
The compression tests were fair (CT scores of 20 and 22). "Sudden Collapse" failures occurred at the facet layer above an ice crust with shear quality of Q2. This weak layer is buried below 100 cm. The facet layer was relatively thick, about 10 cm. I was surprised that unlike other winter packs, there was no defined "cup" shaped depth hoar. Furthermore, the 2 mm facets on this layer right above the ground is part of a 7 cm thick decomposing ice layer.
.
The temperature gradients (showed in the pit chart above) are not sufficient to enhance the formation of depth hoar, or promote the growth of the existing facets.
.
Two fracture propagation test were conducted; Extended Compression and Propagation Saw Tests. The ECT was negative - no fracture propagation was observed. The PST failed after undercutting a length of 20 cm the weak layer (below 100 cm). The PST fracture propagation was energetic and the full 1 meter column was displaced by 5 cm after the collapse. It is likely that the "false positive" of the ECT was caused by small brush at the base of the column. In addition ECT cannot effectively transmit stresses below the 1 meter.
.
Finally a review of the snowpack structure suggest the following structural weaknesses:

It should be noted that the last three structural weaknesses are right on the "borderline". Considering that the PST column displaced downhill on failure, I am not willing to ignore the 10 cm weak layer thickness criteria. And that the standard two CT tests collapsed, again I am not ready to discount the 1 meter depth criteria.

Based on the above the above tests and pit evaluation, the stability quadrants can be summarized: 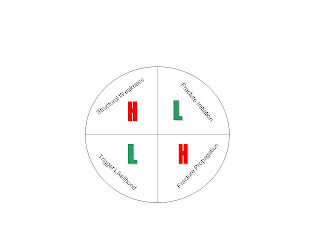 Mores Creek area has abundant ground cover to lock the snowpack in place for instabilities near the ground, which is the case at this time. There are some areas where that is not true, thus caution should be exercised on steep slopes in the 7500-8000 feet elevation range. During the summer I have observed such areas. Maybe next summer I should catalog those areas for future reference.
.

As noted earlier, above 7000 feet in elevation I did not observe any signs of instability. But the 6000-6500 feet elevation at NE exposures, some fractures can be found. The layer released was a soft slab between 20-30 cm, very likely a storm interface. This layer was identified in the snow pit, but during stability tests it was unremarkable.
. 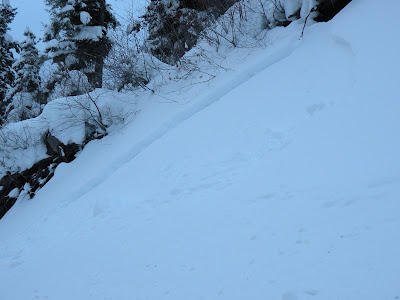 The next picture from Freeman Peak ridge (6300 feet) shows another soft slab release (1/3 from the top). 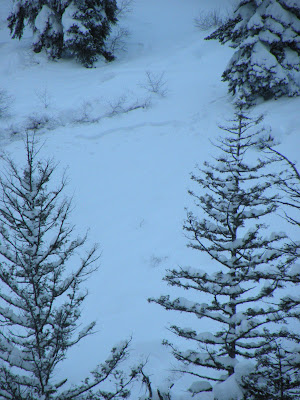 .
One last comment; I continue to be concern about how many continue to use the bottom of the creeks to skin-up to Freeman and Pilot Peaks during periods of potential instability. During my 14 years of touring this area, I have seen avalanches release and come down into the creeks from the south aspects above the creeks. And these creek bottoms are DEADLY terrain traps!

Avalanches capable of burying people seem to be rare at Mores Creek Summit area, but they happen! Keep in mind that these south aspects have thinner snowpack, sparser ground cover, experience radiation recrystallization (near surface faceting) as well as Melt-freeze top layers are formed. All of this factors make the south aspects risky during periods of significant snowfall.

Below a topographic map of Pilot Peak , Freeman Peak, and Winter Corner areas. The red lines denote safe ridge access I use during instability and/or periods of snowfall. The ski runs in yellow are steep enough to slide during periods of instability. Keep in mind that these are NOT the only areas of avalanche danger! 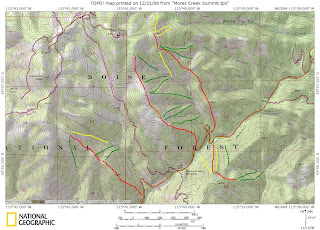 Enjoy the rest of the Holidays!