Today was my first ski day of this season. A late start considering that last year I was already skiing late in October. 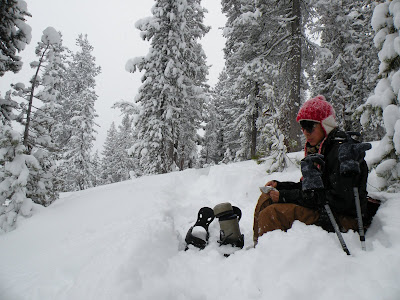 We found almost a meter of snow at the 7400 NNE aspect. The top 400 feet of skiing consisted of epic face shots. But below the 7000 feet the low density snow did not have a base. We managed to avoid serious damage to the boards, but it was definitely sketchy with the many rocks, deadwood, and stumps barely covered by the recent snow.

The snow pit for Big Creek is included below. Click on the image for a better view of the pit profile. 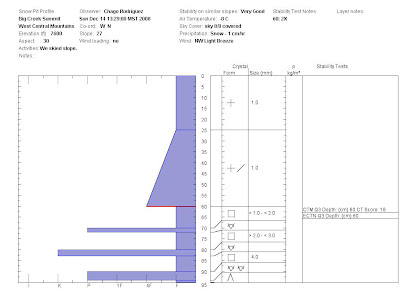 Stability tests (ECT and CT) and snow pit analysis suggested stable conditions. The weak layer below 60 cm deserves to be monitor. This facet weak layer might become reactive as the snowpack continues to be loaded and the top 60 cm gain strength thus becoming cohesive.

The snotel for Big Creek (6589 feet) reported a snow depth of 21.9 inches. That was consistent with our observations at the same elevation.

Mores Creek summit snotel reported today a snowdepth as high as 37 inches, considerably higher than the low 20 inches reported for Big Creek and Banner summits. Did anybody skied Mores Creek or Banner summit areas this Sunday? Can we get a ski and snow conditions report for Pilot/Freeman Peak or Copper mountain?

Wednesday December 17th I will conducting an Avalanche Awareness Session at the Fish and Game (Walnut Street). The event starts at 7:00 PM. The avalanche awareness topics to be covered are summarized in the following document Avi Awareness v2.pdf and it can be found in th efollowing link

During the season I will continue posting useful documents.
Posted by Chago Rodriguez at 8:58 PM