Today it made sense to spent the stormy day in the woods. And at the end of the day there were no regrets!

Big Creek Summit (6580 feet elevation) is located on the road to Warm Lake. The electrical transmission powerlines crossing the road and car pullout are the only indications of Big Creek Summit. The road to warm lake is the first road north of Cascade, off from highway 55, and immediately after crossing the Payette river as you are leaving Cascade. 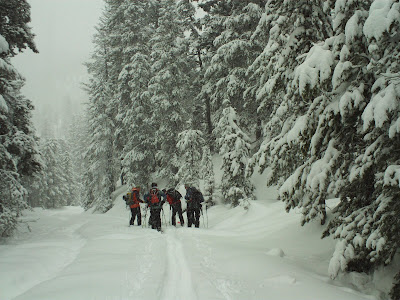 We found at Big Creek Summit 20 cms of new snow in top of a 0.5 cm of rain crust found at all aspects. Above 7000 feet the crust was present, but it was harder to detect during skiing. The new snow with a density in the 8-10% range, offered soft and fast skiing. It was not not the champagne or blower quality we dream about, but fortunately it was dense enough to keep the ski edges off the rain crust most of the time. The rain crust was the result of the precipitated rain at the start of the storm cycle.

The coverage is not as deep as other years by mid-January, but the 1.4 to 1.5 meters of snow depth was sufficient to appropriately cover the very rocky terrain of Big Creek Summit. 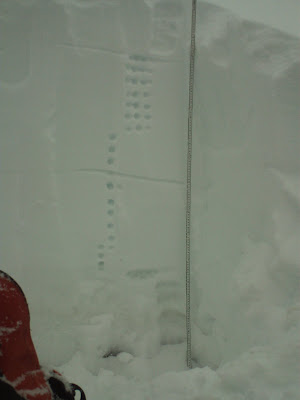 We had enough folks to look at the snowpack at SW, E, and NE aspects at the 7550 elevation mark. At these aspects we did not find a reactive basal layer. But the depth hoar and heavily faceted bottom 40 cms. continues to be a concern for our party. The thick layer of depth hoar and faceted bottom snowpack was present at every one of the 3 pits we excavated.

The surface hoar (SH) layer buried 50-60 cm below the surface had moderate CT scores and Q2 shear quality. The quality of shear was sluggish, but at every one of the 3 snowpits, the fracture plane was very smooth. At  E and NE aspects it is easy to encounter buried SH crystals, but not at the SW aspect, were we could only find a layer of large facets on what used to be the SH interface. Testing for fracture propagation were negative for the basal and buried SH.

Interesting enough at the E and NE (not SW) we detected a layer of large graupel balls (4-5 mm) buried at 30 cm. This interface was nonreactive during the stability tests.

Anyhow, considering the easy RB2-Q1 score for the NEW storm snow, as well as the moderate scores for the buried SH we relied on a conservative approach and did not skied the steep and complex terrain north of Peak 7659. 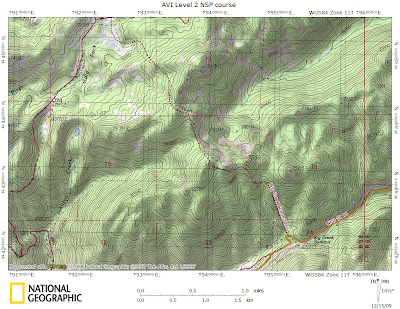 The skiing at the mellow West and South aspects slopes was fun, and I am looking forward to visit and ski Big Creek Summit again.

Posted by Chago Rodriguez at 10:50 PM