The relatively warm temperatures of the last few days have allow the snowpack to settle and accelerate the sintering process. It is still possible to identify interfaces at 25 cm (recent snow) and 45 cm (buried SH), but on a NE slope at 7600 feet of elevation, none of these two weak layers reacted to compression tests. However, we continue to be surprise at the persistence of basal layer instability. This layer failed at CT21 with a "sudden collapse" (Q1).

Skiing was fun on NE and N slopes, with 25 cm of soft pow. Slopes protected from the wind and sun, had some delightful non-cohesive snow. During the afternoon, about 2 cm of new snow were added to the snowpack. South and SE aspects developed a breakable crust late this past week. Too bad, because our party wanted to do some skiing on that aspect.

Below 6200 feet level, a rain crust was present at all aspects buried under the 10-15 cm of new snow.

Find below a chart for the Mores Creek Summitt  based on Snotel data, with temperatures (right axis) and precipitation (left axis) for the 2009-2010 water year (starting October 1st). In this chart it is easy to identify the mid-December dry and cold period responsible for the depth hoar formation (deep instability). It is also very noticeable the warming trend for the last week responsible for the consolidation and densification of the top meter of the snowpack. 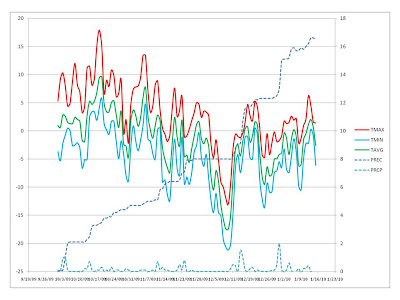 Below a picture taken today of the snowpack at  7600 feet, NE aspect. 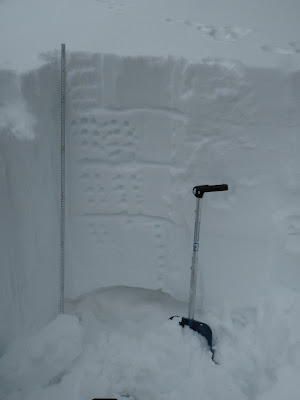 Below the fist hard top 25 cm of snow, the snowpack hardness increases gradually from 4F to 1F, until the depth hoar layer, where the hardness is "Fist". The good news is that the denser top snow will act as a "bridge" and limit the activation of the problematic basal layer. The bad news is that if these weak layer is somehow activated, a very deep and dangerous avalanche will result. The snowpack at Mores Creek summit appears to be relatively uniform, thus it is not easy to find an effective trigger point for basal layer instabilities. But we need to stay vigilant, particularly on steep and thinner areas (such as slopes that avalanched during the mid-December instability cycle).

Today was my first visit to Freeman this year, and I was able to "open" Ralph's Igloo to business! I was not sure where the entrance was, but I guessed right. 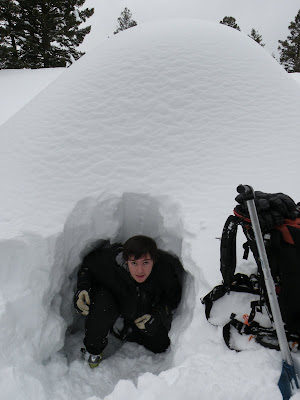 Above Steven exiting the Igloo, and below, Brandon writing a "Thank You" note on the "visitors journal". 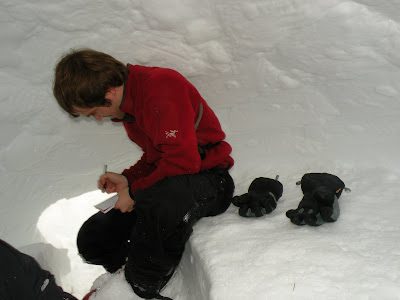 During my second uphill climb, another party was already enjoying the Igloo. 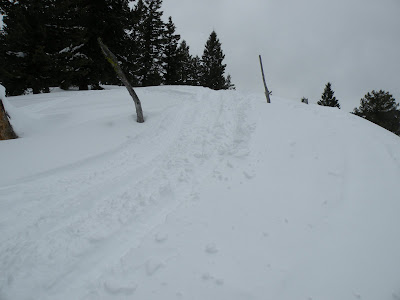 The pull-out at Freeman was nearly full today, with a good number of folks in the hill, and it was a pleasure to chat with the various groups. However, it is worthwhile to note we never crossed our downhill ski tracks with any of the other parties tracks! That speaks volumes on the significant amount of lines and terrain that can be skied at Freeman peak. 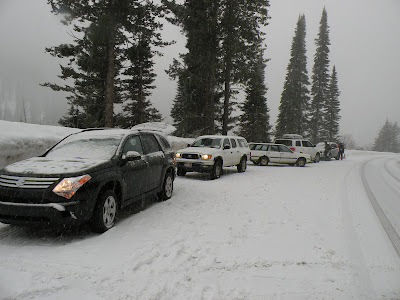 What we need at this point is a good storm to cover the old tracks. Wednesday new snow provided a very skiable refresh. But tracks from the first week of January can still be seen under the recent snow. More snow will also help in finally covering the brush at the lower elevations of Mores Creek Summit area and open more exits runs in those areas.

Have a wonderful weekend!

Posted by Chago Rodriguez at 11:12 PM