On Christmas day Pedro (my son) and I ski toured Pilot Peak in the Mores Creek Summit area. It was a strikingly beautiful day; blue bird day, light  to calm winds, and sweeeet snow. The skiing was fantastic!

Below a short video of Pedro skiing the mellow terrain at Lamar Bowl.


Cold nights and warm days (below freezing level) have favored the formation of a thick layer of "Near Surface Facets (NSF)" at NE, E, SE, S aspects above 6500 feet. Diurnal recrystallization faceting is responsible for transforming the recent snow into facets, the results of very steep gradients during the day and nights. The snow surface gradient was estimated to be ~ 80 deg-C/meter (8 deg-C/10 cm) when measured at 7500 feet on a NE aspect slope above Lamar Bowl by mid-morning.

This layer of NSF is what some people call "Wild Snow", it is skiing fantastic, and we should enjoy it before it becomes a problematic layer once it is buried by snow. In addition to NSF, we observed significant areas (N,E,S aspects) covered in Surface Hoar (SH). 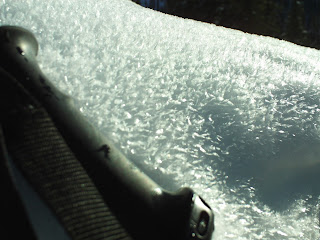 If these two layers (NSF and SH) are not destroyed by wind & warm weather prior to the next storm winter, it will mean that winter recreationists will have NEW layer to worry about in addition to the existing interface between last week NEW snow and old faceted snow. This layer interface was responsible for a very active Natural Avalanche cycle during December 17th, that resulted in a snowmobile fatality in the Cascade-Long Valley West Mountains. This very problematic buried layer was identified 65 cm below the snow surface at Lamar Bowl - Pilot Peak. The snowpit is included below for your perusal: 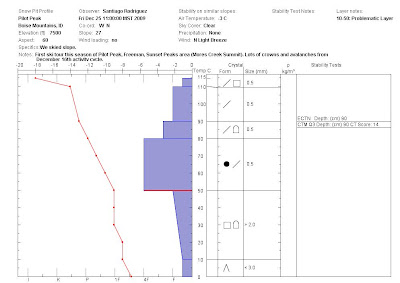 Stability tests conducted yesterday as well as snow observations did not revealed signs of instability with the most recent snow (moderate scores, but no propagation propensity and low shear energies -Q3). However, we never skied anything steeper than 30 degrees with a North or East aspect. After taking a look at the South and SE aspect snowpack (no weak basal structure found), and driven by the angelical Diurnal recrystallized snow, we farmed a SE slope with angles in the mid-thirties. Below the 6500 feet elevation the snow at South aspects turned into corn with supportable crust! What a day!

During the last three weeks I have ski and toured the Copper-Banner Summit, and Brundage-Sergeants ridge. Every snow pit at W/N/E aspect have consistently revealed the same WEAK structure; slab sitting in top of large cohesion-less facet crystals. When this layer is tested for fracture propagation, the results are consistent; fracture propagation potential is high. Feel free to entertain yourself with a video of a Propagation Saw test (PST) test performed at Brundage - Hidden Valley area last Sunday December 20th;

During our Christmas Day ski tour we observed MANY areas that slided a week ago. I have to admit that I was VERY surprised to see signs of avalanches in areas with slope angles in the low thirties! As expected all of the avalanches occurred at N, NE, E aspects. Below a picture of the popular "Almost Top of the World" slope. Notice the avalanche path next to the ski tracks (skier right, or looker left). And keep in mind that this was not the ONLY popular ski run that avalanched. 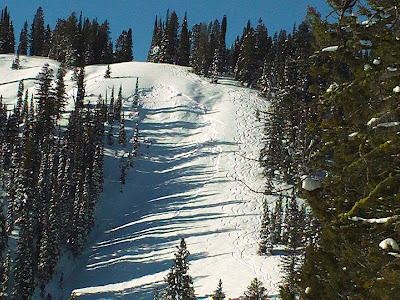 It is IMPORTANT to remind backcountry skiers that ALL of these slide paths might become repeat offenders! The weak basal layer it is still present, and faceting continues unabated on the most recent low density snow deposited during the December 20/21st storm. As mentioned earlier on this blog posting, and documented in the snow pit included above, the "Mores Creek Summit" snowpack it is still experiencing significant temperature gradients not only at the top 20 cms but through its full thickness. Thus, we need to assume that at N, E, W aspects above 6500 feet the snowpack continues to change, and not for the BEST!

Once we get NEW snow at Mores Creek Summit (next week), I suggest winter recreationalists  to avoid the "familiarity" human factor, and to carefully evaluate and test every slope above 30 degrees before skiing it. Remember that most steep terrain at Mores Creek has severe terrain traps (trees and NASTY creek beds). These conditions are highly unusual conditions for our area, so it deserves conservative decision making!

Posted by Chago Rodriguez at 12:41 PM