I wish the best to all of my friends and readers of this blog. Without you this work will be meaningless, and I am appreciative of your support and encouragement during the last two years. As I get to personally meet many of you, and how this blog played a role in becoming friends, it re-energize me to continue sharing my experiences and observations.

Now, if we can get others to also share their experiences in the Idaho Mountains while ski touring and backcountry skiing, that will be AWESOME!

The skiing at the Glades (Pilot Peak) was superb. Please refer to a map posted in the blog few days ago:

During my first ski run I made the mistake of using sunglasses, and I suffered the consequences by having my eyes sandblasted by jets of cold snow from the face shots. The rest of the day I was glad to have goggles buried deep in the pack.

By noon there were 30 cm of new snow. The temperatures were cold all day (minus 5 deg-C), and the snow came down without the effects of wind (Winds were light from the South in the morning, switching to light winds from the North in the afternoon). Thus the combination of relatively cold temps and light winds, resulted in "cohension-less" snow we dream about skiing every day.

Below, not a great movie clip, but it gives an idea of the fun conditions.

It was another wonderful day in company of new friends (Brian and Trevor), and my son Pedro. And we skied until we ran out daylight.

Due to low density nature of the new snow, the "SKIING" penetration was deeper than the 30 cms, and we were still sinking into the layer of "near surface facets".

It was also GREAT news not to have a slab sitting in top of the surface hoar that was buried with the new snow. Due to the lack of winds and/or warm temperatures, the surface hoar (SH) observed everywhere at Mores Creek Summit was not destroyed. Careful inspection of the snowpack reveled that the surface layer was present, but inactive under the low density thirty centimeters of NEW snow.

Stability tests done yesterday confirmed that the "basal" weak structure it is still a concern, with moderate Compression Test (CT) scores, but Q1 shear quality. A second CT at a different location (same aspect & elevations) did not failed after 30 taps. This confirms that we are dealing with a severe case of spatial variability, or simply visualized as a "mine field" scenario.

The surface snow (30 cm depth ) revealed CT results in the CTV and CE range with Q1 and Q2 results. ECT for the surface were negative. These results are not surprising due to the presence of SH. But the keep in mind that yesterday snow was in the very soft slab to not-slab range, and it is hard to get reliable CT/ECT results with very soft slab conditions. Ski cuts performed during the day were negative.

An observation of interest was finding a delicate thin crust layer at 40 cm of depth. This layer was capped by 10 cm of NSF, SH, and the 30 cm of new snow. This thin crust was detected at a NE aspect -7400 feet. It is NOT widespread, and it was observed only once. Just another piece of data suggesting conservative decision making.

When considering the basal weak structure and presence of surface hoar (SH) under the new snow we carefully selected slopes below 35 degrees. The ski lines we skied yesterday top at 32 degrees in steepness. Even when we search hard to find "warning"signs, we did not find any indication of instabilities.

The non-slab nature of the new snow allowed us to enjoy the skiing. But that is not going to last for too long. The forecast calls for moderate winds out of the South starting this afternoon, a significant warming trend during Friday daytime, and possibly wet snow precipitation at the 7400 feet level for Mores Creek Summit area. Notice the rain predicted by the models during Friday afternoon. 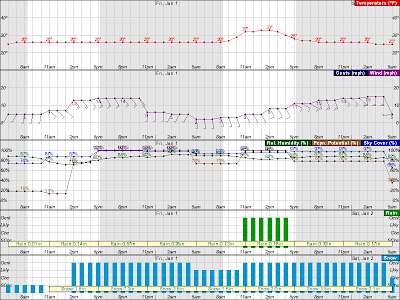 As wind, warm temps, and additional significant precipitation (with possible rain) start to have an impact on the snowpack it is reasonable to expect the formation of surface slabs that will activate the surface hoar existing under the snow at Mores Creek Summit. Meanwhile, there is a "deep instability" buried at the bottom of the snowpack that has not gone away. I said this before, it is important to make conservative decisions for this very unusual snowpack.

Finally I want to encourage "Mores Creek Summit" backcountry skiers to help with the economy of small Idaho towns. I understand times are though, but stopping at the local ice cream parlor, restaurant, or groceries stores in Idaho City will go a LONG way to get support from the locals. It really fills my heart how welcoming the locals are, and how they remember names and faces from the previous ski season.

Chago
Posted by Chago Rodriguez at 6:51 AM