We were hopeful that the new snow from Tuesday storm would have been preserved during the night.


But it was not meant to be! The temps kept raising during the early hours of the morning. Check the above snotel data for Mores Creek Summit and Trinity Mountains. The Trinity mountains is an adequate "proxy" to estimate temperatures at higher elevations.

The combination of warm temps as well as the inverted new snow (lighter density at 20-10 cm depth, and heavier and wetter snow in the top 10 cms) negated us having a POW day today.

Not surprisingly the 25 cm of new snow produced easy trigger and moderate slip likelihood without no evidence of propagation potential; CTEQ2 and ECTN. Warm temps are greatly accelerating the rounding and sintering of snow grains, and bonding the new snow with the pre-storm surface. In fact, the Q2 results were bordering the Q3 score realm. Stability tests were conducted at 7500 feet, East aspect, on a slope with a steepness of 28 degrees.

Between the 25 cm to 50 cm there were two layers of melt-freeze crystals that produced moderate results (CTMQ2), and as mentioned before no evidence of fracture propagation. These are the layers where the rain from last week collected or "pooled".

At the 80 cm another weak layer was identified with CTHQ2 stability results. This weak layer caught our attention because it was the cleanest sliding surface, but it was very sluggish. The 80 cm was only reactive when the top 40 cm was removed. This type of test is call "Deep Tap test", and it helps to identify deeper instabilities.

The snow in the top 100 cm was mostly in the 1 Deg-C (surface snow) to - 1.5 deg C (80 cm layer), with most of the snow structure at or close to 0 deg-C. It is fair to say that the snowpack at Mores Creek Summit is pretty much a spring (isothermal) snowpack.

By the way, our two team of "snow geeks" performed the above stability assessment at two different locations and we were completed in 15-20 minutes. We would like to encourage this type of stability assessment, it was not only valuable in making ski decisions today, but it provides a better understanding of the Mores Creek snowpack as we continue to harvest POW skiing during the spring storms.

The surface snow had free water (remember the 1 Deg-C temps listed above), thus it was common during ski touring and skiing to trigger point releases of wet loose snow at steep slopes that only involved the surface snow.  Please be mindful of these wet loose releases, in steep terrain it can take you to places (terrain traps such as Summit Creek with 8-9 feet snow banks!) or obstacles (trees) you would like to stay away from.

The weather forecast for the next few days does not look promising: 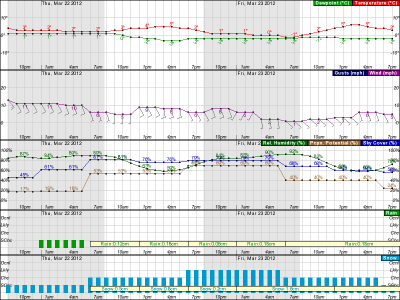 This is a forecast for Mores Creek Summit at 8000 feet! Notice the temps above 0 deg-C as well as the rain forecasted for the next two days. Bummer!

The above forecast is available at: Mores Creek Summit Weather Forecast under the "Hourly Weather Graph" link in the lower right corner.

The skiing was technical with the inverted heavy snow in the top, and lighter snow below. However, we still have plenty of fun skiing the "Almost Top of the World" area.


Posted by Chago Rodriguez at 8:14 PM