Today I was surprised by the quality of skiing at the headwaters of the Lamar Creek to the East of Pilot Peak. There is not much I can add after you watch this video.


.
I realize the soundtrack is not a great match, but it was in my mind all day as skinned up and skied down.

I could not rally my sons and friends to accompany me, but I really wanted to tour today the Lamar Creek area. Similar to last Sunday, I had a late start, and it did not helped when the pull-out below the Summit Creek switchback (next to Winter Corner) was not plowed, and I had to get the shovel out and excavate a spot for my vehicle. 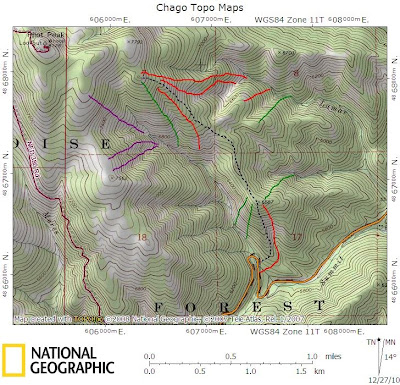 The red lines in the Lamar Creek area topo map correspond to the slopes I skied today. The run shown in the video clip are the second through fourth in the clockwise direction.

The green lines are other nice runs I usually ski when I have more time. The terrain at Lamar does not exceeds the 32 degrees of steepness, and with few exceptions besides the nasty terrain traps at the very bottom of the ski runs in red, the terrain can be easily managed when concerned about avalanche stability.

Besides great ski conditions, the snowpack was unremarkable above the 6500 feet at North through East aspects. Below 6500 feet at E to S aspects there was a supportable crust with 30 cm of fun pow, and if you allowed the ski to run free, it was possible to avoid the scratching!

Chago
Posted by Chago Rodriguez at 7:27 AM