It is unreal to think about three very different days of backcountry skiing at Mores Creek Summit, and each with wonderful snow to ski. Today we were presented with the GRAND FINALE for this holiday weekend, more snow!

The snotel reported 3 inches (~ 8 cm), but above 5000 feet we drove to Mores Creek Summit on 15-20 cms of NEW snow. Apparently the snowplows were busy taking care of the Boise - Idaho City corridor, so we had the the road for ourselves, and we skinned on the road before we starting to climb on the mountain. 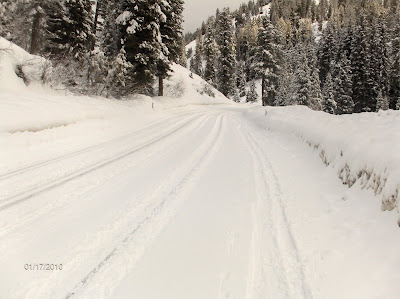 We skied the "Glades" at Pilot Peak. And we only saw another party of two at Pilot Peak. We also noticed during the day a set of good looking tracks being set at Winter Corner. 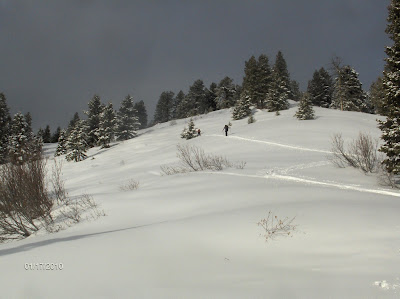 The NEW snow (up to 25 cms above 7000 feet of elevation) was soft and velvety at N and NE aspects, or under the protection of the mature tree stands in the old growth forest. But at NEE (60 degrees) and E aspects the snow was heavier in texture, and a crust was formed later in the day, once temps started to drop.

I was BC skiing and hanging around with a friend that recently completed his AVI L1, and three others that are about to complere their AVI L2 course. Thus, a quick pit was not enough to satisfy their "scientific" and "nerdy" curiosity of my companions. THEY wanted to do a a full study snow pit. Below a picture of the snowpack profile. 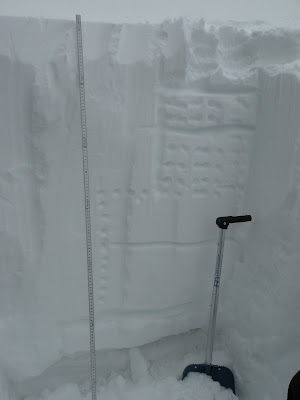 Another picture of my friends (and Pedro in the foreground) auscultating the snow on a NE aspect at 7300 feet, 20 feet above a fracture crown from the mid December avalanche cycle. 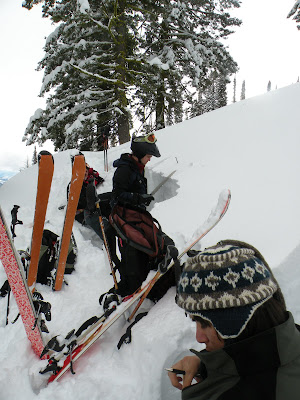 In summary, we continue to have evidence of propagation potential on the basal "depth hoar" (DH) layer. Non standard tests such as "deep tap" tests continue to show moderate to easy failures with Q1 shear quality. However this layer is buried  120-130 cm down, and it is not easy to trigger it. But weak spots in the snowpack (rocky and/or shallow spots) can potentially trigger this weak layer. Caution and conservative decision making continues to be the rule of the game.

The two buried surface hoar layers continue to gain strength with the recent gradual loading (new snow from last Wednesday and Today) and warm temperatures. Testing at a NE aspect did not produce failures (CT30, and ECTX) on the SH layers of concern. But in another pit in a East aspect we obtain a CT11Q3 on the shallower buried SH layer (35 cm). A repeat of the compression test resulted in a hard score (CT22). This might be the result of spatial variability due to the nature of SH deposition.

In summary, the snowpack has gained strength, but the persistence of the DH, and variability of the SH distribution requires that we do not let the guard down!

Below some additional pics snapped during the day by Brandon. 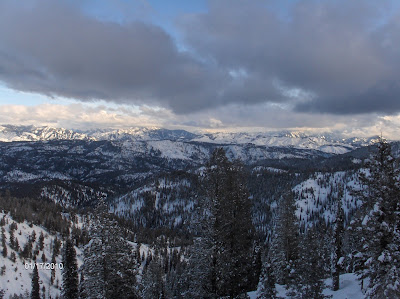 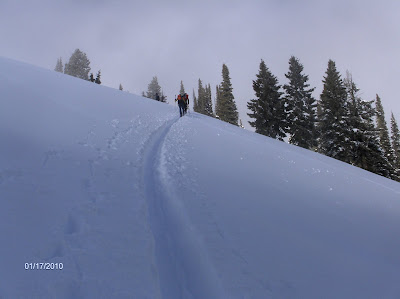 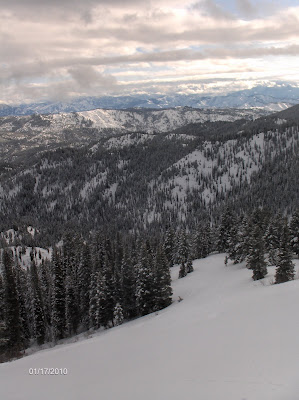 We also got the following report from another friend, and adds more support to the need to carefully evaluate steep slopes to be skied:


I wanted to post this to the West Central blog site but I can't figure out how to do it.

Over the weekend a group from Idaho Mountain Search and Rescue Unit Snow camped at 6800 ft off the road to Sun Set Mountain. The conditions for making snow shelters were challenging with only 120 cm of snow to work with. Most people in the group used a mound style shelter, piling snow and packing it down up to the 200 cm level. Trench shelters were not possible as the buried surface hoar layer limited the block size and was not affected by packing down the area. My partner and I were the only lucky ones to have a bush right in the middle of our shelter! Not many people get to sleep both in the bushes and in a snow shelter at the same time.

We performed stability analysis on a 32 deg NE facing slope at 6800 ft. We had two failures on the base layer, both Q1 with sudden collapses. We scored a CT12Q1 on the base layer, and a ECT21Q1 also on the base layer propagating the entire column. We also performed a penetration saw test. Knowing the story with the base layer I chose to fail the surface hoar layer 70cm from the ground. We did not observe this layer failing in any CT tests but I wanted information about the propagation likelihood of this layer. We isolated a 100cm x 30 cm block and easily identified the surface hoar layer of interest (70cm from ground in a 120cm snow pack). The block failed 35cm into the cut with a very energetic and clean release. We scored a PST100/35Q1End 70cm from ground for this test.

This week I am teaching an AVI L1 for Wallowa Alpine Huts (North-eastern Oregon), and the weekend after, I will be teaching the final two field sessions of a NSP AVI L2 at Soldier Mountain Ski resort. Thus, this will be my last snow report for a while. But I am certain that there will be others submitting their observations and publishing their postings!