After the great conditions at Pilot yesterday April 10th, it did not feel right not going again to Mores Creek Summit.

It was bluebird day, tranquil weather with some light winds. It was cool through the morning (-1 deg C), reaching +5 deg C by noon, and +8 degrees C ( 46 deg-F) by mid-afternoon.

During trail braking there was a mix of cool dry snow with wet snow - I broke trail from Mores Creek Summit to the "Knob" at Pilot's and for the first time I was taller than my friend Mike L. I forgot to dry my skins the night before, therefore the snow was sticking badly to my skins. Sometimes I was 6-8 inches up - I am not joking! The day was saved THANKS to my chap stick! I used the whole thing on the skins to be able to skin-up the rest of the day.

Considering the instability observed the day before at Pilot, we carefully selected a representative pit location below the NE summit of the Knob. This is an area that get frequent visits and it is not easy to select a location that has not been affected/compacted by skiers/riders.

In summary, in simplistic terms we had two green flags and two red flags;

With the above information, it made sense to stay away from steep slopes, considering the the snowpack was getting stressed by the thermal heat input. We skied the Knob mostly northerly aspects. The steepness for that area tops at 32-34 degrees, and it was not wind loaded by the Thursday snow transport event, thus we felt comfortable skiing them.

Below a picture and video clip of Mike L. skiing the goods. 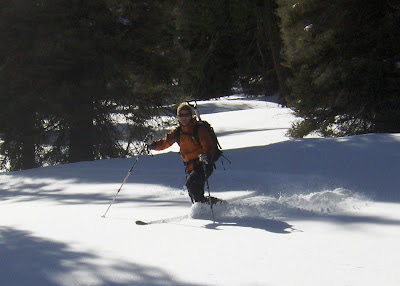 As you might notice from the pic and video, the skiing at N and NE aspect was winter like. We avoided the East aspects expecting some unsupportive crusts. We skied out via a southeasterly ridge with a supportable crust covered by 10 cm of creamy snow. The heat of the day produced enough free water in top of the snow to create areas of "sticky skiing" below the 6500 feet level, but it was still very skiable.

It is very likely that the temperatures of this weekend will produce a very supportive crust on east aspect slopes once we get a solid overnight freeze. And in a matter of days we should be able to ski corn at most of Mores Creek East and South aspects. But it is unlikely, that the weekend heat could nudge the NW, N, and NE slopes into a spring snowpack. What we can expect is that the instability observed Thursday should be history by now!

Posted by Chago Rodriguez at 8:32 PM