After spending Saturday indoors with the family, cooking delicious dishes, playing table games (and loosing every single darn game!), sharing presents, and enjoying each other company, it was time to play outside!

This morning we had a late start. Sunday was an unsettle weather day, after a quick moving storm front left behind 10-20 cm of new snow. The new snow was soft, but heavily "rimmed". In protected aspects the new snow felt in top of 10-15 cm of unconsolidated snow. The slopes with W/NW/N aspect we skied had between 20 to 35 cm of "FIST" hard now that provided great skiing. 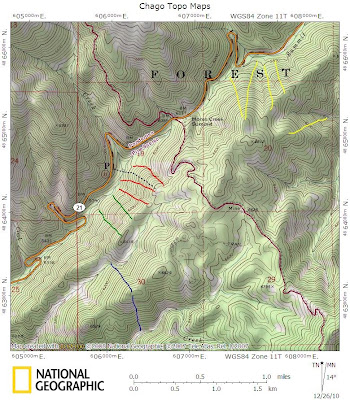 The P in the above topo map denotes the pull-out at Freeman peak, and in red the slopes we skied today. The green lines are two other fun lines we did not have time to ski today, but trust me, they are delightful. In blue are the slopes I skied several weeks ago during my first 2010 Winter Tour. The yellow lines corresponds for to ski lines in "Winter Corner". These ski lines are short, but provide great skiing, particularly during short days when time is limited to tour above the 7000 feet level.

The Sunset Peak West Glades are relatively low in elevation (5600 to 6400 feet), and for few years the snowpack has been too shallow to permit good skiing without doing hand to hand combat with the insidious low elevation "Mores Creek Summit" brush stands. Considering that the Mores Creek Summit area snow depth is 120% of average, we gave it a try to the Sunset West glades above I-21, and we found exciting tight lines with knee deep pow.

The video for today's skiing was edited and put together by my son Fritz. Santa Lourdes was very generous this Christmas, and I got a very cool GoPro HD video camera.

The warm temperatures during the last week have resulted in an "nonreactive" snowpack below 6500 feet even when it is stratified, and various facet layers can be easily detected. Stability evaluation at West and North aspects did not reveal evidence of propagation potential (ECTN) and trigger likelihood (ECT & CT scores above 20 taps) results were "hard". The rain crust buried  (20-35 cm) produced "LOW slip likelihood" results with scores consistent scores in the Q3 range. In addition, hand pit tests and several ski cuts on steep roll-overs did not provided evidence of instability. This was surprising, since I was expecting to see pockets of "surface hoar" and/or "near surface facets" buried by the recent NEW snow. Perhaps the conditions at 6500 feet or below did not favored the formation of SH and/or NSF.

It is worth noting that below the 5 cm thick "pencil hard" crust layer there is a facet layer (4F hardness) undermining a decomposing rain crust layer. The faceting of the "rain crust" is being driven by a temperature gradient above 1 degree Celsius per 10 cm below the crust and facet interface, where warmer snow (-1 Deg C) is providing the energy enabling faceting metamorphism. It is a good idea to keep track of this decomposing rain crust layer, particularly at higher elevations (above the elevations we toured today - 6500 feet) where the crust and facet layer might be thiner and/or more reactive.

Chago
Posted by Chago Rodriguez at 12:02 AM