The conditions at Copper Mountain - Banner Summit, exceeded my expectations. Skiing was lots of FUN! And definitely much better than Mores Creek Summit this last Friday.

Copper02012014 from Santiago Rodriguez on Vimeo.

For starters the rain crust was less evident at Copper. Above 8000 feet, the crust was sporadic and very thin, and covered by 30 cms of new snow.. South aspects had a solar melt crust under the new snow, and all other aspects have a dense layer under the new light density snow.
Apparently there were two parties with as many as 3 folks per party (based in their uphill tracks) this past Friday. Today there was only one other guy with a dog at Copper Mountain. I never saw him, but noticed the track he left to skiers left of my track at Copper South face.

The Friday parties labouriously farmed the west glades and the right shoulder of  Copper's south face. No big deal ...  my plan was to ski the south face, drop into treeline, skin-up into the second high point to the East of Copper Mountain Summit, ski the north slopes of this 2nd peak along Copper's east ridge. After skiing 3 short drops into the north slopes, ski the SW slope of the 2nd Peak East of Copper, climb back into copper main ridge, ski a hidden tight line in the West glades, climb back into Copper's mid west ridge, and ski a south aspect slopes until reaching the flats leading to the road. Not a bad day of skiing at all!


The snowpack 100 feet below the 2nd summit east of Copper was 195 cm deep. The early december weak layer of facets is buried under one meter of snow. The new snow was the only reactive layer with CTEQ2(RP) and ECTN scores identified at this test pit location.
This is the first time in more than a month that I have not  witnessed a whumpf . Furthermore no evidence of nearby avalanches was observed with the exception of Cape Horn south aspects with wet loose avalanches at steep rocky slopes most likely from the wet snow or rain event at the start of the last storm.

Once more, considering the deep persistent weak layer now buried at the 1meter depth, but still reactive, I  did not skied any slopes with angles exceeding 35 degrees. Furthermore my selection was limited to conservative lines.

North aspect slopes about 400 feet below the main ridge did not inspire confidence as the snowpack depth rapidly decreased.  And these slopes surpass easily exceed the 35 degrees! in steepness. Shallower snowpacks with the buried basal facets and steep angles deserve a lot of space, particularly below Copper's alpine terrain with many trees at the avalanche runout zones.

The best ski conditions were at North aspect slopes, but I also found lots of great snow at West and South aspects.
As I skied out of the North back into the SW side of Copper, I enjoyed the views of the ski tracks laid by other folks, as well as the few tracks I contributed to.

As I prepared to do my penultimate ski run, I noticed the tracks to the NW face of Peak 9218. PEak 9218 is one my favorite destinations, but it requires some effort (somewhat long flat approach) to ski its fabulous East aspect slopes.
This area is accessed by parking at the avalanche gate. 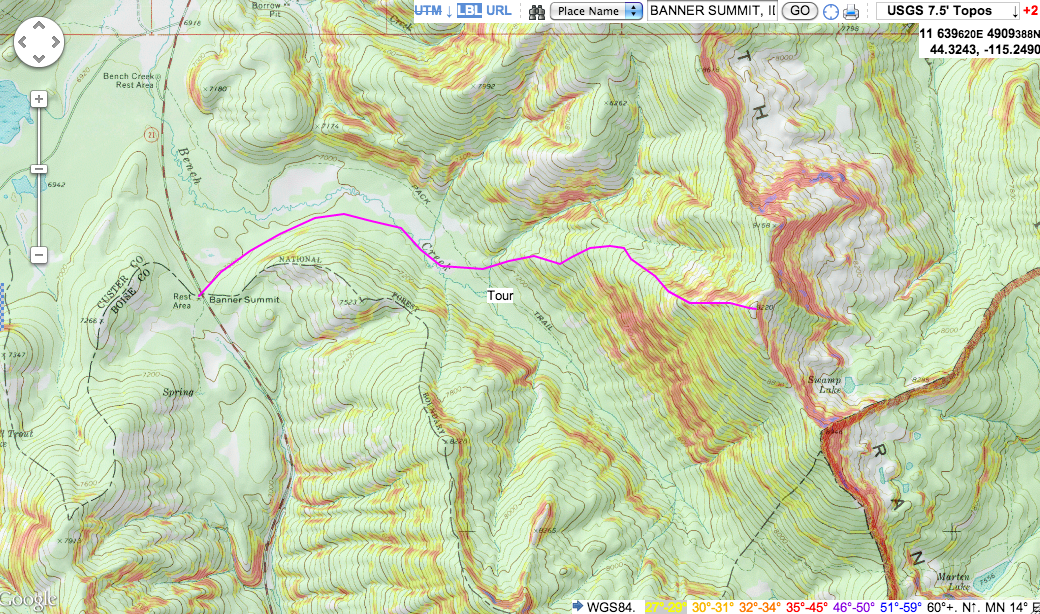 Posted by Chago Rodriguez at 12:13 AM