Pretty cool picture ... this was yesterday, mid-morning of 2013 on Thanksgiving Day. Ten centimeters of recrystallized snow in top of a dense and supportive layer that made skiing very pleasurable.

The NRCS Snotel telemetry at Trinity Mountain appeared encouraging with close to half meter of snow, and although the Mores Creek Summit Snotel looked discouraging, I felt confident the skiing at MCS will be fun above 7000 feet at protected northerly aspects. In addition the significant drop in temperature after November 21st held the promise of facetting the surface of the snow to create good riding conditions.


The link included below will get you to a map of Idaho with SNOTEL sites. Move the cursor over the sites and the name of the location is interactively shown. The most popular locations used by backcountry riders are: Mores Creek Summit, Trinity Mountain, Banner Summit, Big Creek Summit, Bogus Basin, Brundage Reservoir, Vienna mine, and Galena two sites.

The situation looked grim at the Mores Creek Summit Pass (6100 feet), where the dirt road to Pilot Peak starts. But as elevation was gained, particularly above 7400 feet, it started to look wintery.

Skiing was fun, and the ski touring was superb on a strikingly calm and cool day. The Central Idaho Mountains views from Pilot Peak Summit and West Glades were magnificent. It could have been perfect if two fools in a vehicle would have not attempted to go up Pilot Peak road and torn-up the snow where otherwise could have been great skiing back to the 6800 feet level, before having to get off the skis, and hike down to Idaho 21.

This is a good time to highlight WHY backcountry recreationists will benefit from checking the snowpack. Below a picture of the current snowpack at Pilot Peak west glades. 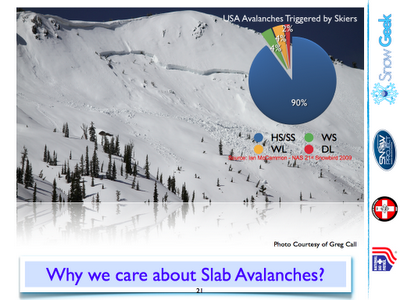 There are many different approaches and philosophies about how to best make an stability assessment. One of the techniques is based in the Stability Quadrants to reduce the most significant data from our complex environment. The stability quadrant is based on the events leading to a slab avalanche;

The stability quadrant provides a structured methodology to assess each of the elements of the slab avalanche: trigger likelihood, propagation likelihood, and slip likelihood. The next slide illustrates how the avalanche triangle (Snowpack, Terrain, Weather) are assessed through the Stability Quadrant lenses and applied to the terrain. 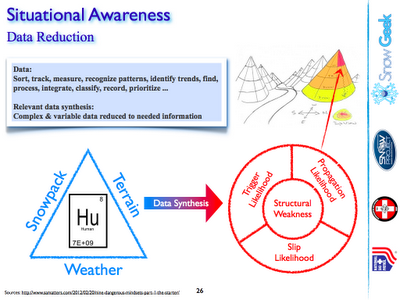 Data reduction is critically important because it is intrinsically linked to the perception of elements in the environment. Most human errors are caused by inadequate or poor perception of the environment. The stability quadrant methodology compels the user to adequately perceive its environment - The Snowpack, The Terrain, and The Weather! 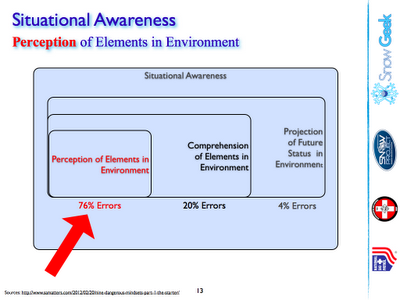 Casual observation of Pilot's Peak snowpack at 7930 feet in a North aspect revealed a slab structure, where the top 30 cm of cohesive snow is undermined by a 5cm layer of cohesionless snow sitting in top of a 10 cm layer of hard ice. Not Good!

For snowpit and stability tests you need the following gear:

Avalanche professionals, snow scientists, and snow geeks (like me!) strongly recommend the Extended Column Test, most commonly known as ECT. This stability test allows to assess the trigger, propagation, and slip likelihood. Included below, a short video of an ECT conducted at Pilot during Thanksgiving Day. Pay attention to the propagation and sudden collapse (SC-Q1) of the whole column during the wrist taps (Easy Trigger),

Using the snow stability framework and the ECT we have learnt the following about the snowpack at Pilot Peak's northerly aspect with an elevation of 7930 at a non-wind loaded site with 20 degrees of steepness:
For more details about ECT, please check the next link for a most awesome and fantastic video. The video demonstrates how to build an ECT isolated column of 30 by 90 cm, and how to perform the test. Please stick to it, at the five minute mark you will be able to clearly see the propagation failure.

At the center (or heart) of the stability quadrant the SLAB structural weaknesses are responsible for its triggering, propagation, and slip potentials. The snowpack structural weaknesses are thoroughly evaluated depending on your level of training and experience. For the Snowgeek I include below the anti-crack fracture equation with the various elements responsible for structures that drive fracture initiation and self-propagating fractures in the snow. 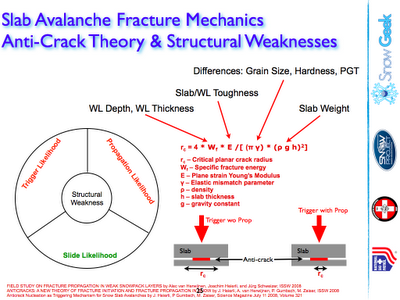 Ian McCammon developed a methodology of evaluating structural weaknesses known as snowpack "lemons". This methodology allows to determine if there is a CONCERNING snowpack with a POOR structure if the addition of lemons totals 4 or more.  This methodology is quick and fits pretty well for most recreationists needs. Below a link with technical paper.

A field method for identifying structural weaknesses in the snowpack

After the stability test (ECT) is completed, the offending or concerning weak layer is identified. Using the "Lemons" identified by Ian McCamon, we can proceed to evaluate structural weaknesses of the snowpack at Pilot's Peak West Glades:
There are a total of 5 Lemons identified, more than 4 lemons, indicating the the snowpack structure is POOR and very concerning.


A quick snowpit reveals the presence of a slab.

An ECT is used to identify Trigger, Propagation, and Slip likelihoods.

The ECT identifies the most concerning weak layer.

With practice this process can be completed in no more than 20 minutes.

After playing in the snowpit, it was time to go skiing. Later in the day I ran into an acquaintance, Ken, after I skied a nice slope with moderate angles (mid twenties), since I did not think it was a good idea to ski slopes with angles above 30 degrees, particularly when I was solo touring.

The snow coverage above 7500 feet was not bad at all!  Open glades were looking quite tempting. Don't you agree? 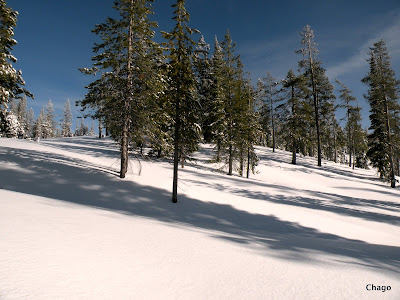 After several laps at Pilot Peak West Glades, it was time to ski out. At the 6800 feet we got off the skis, and hiked down the road.

Tonight I will make another posting at MCS Blog for those interested in additional snowpack observations, spatial variability, as well as other other stability test results observed at Pilot Peak during Thanksgiving Day. I did not wanted to go to BIG in the first posting of snow conditions for the 2013-2014 Season.

I hope you enjoyed your Thanksgiving Day! Cheers!