The skiing at Pilot Peak last Sunday and Monday was described as exceptional by Jim and Erin (Blog contributors). Well, it was no different Tuesday January 23rd. The cold temps and clear nights have kept the surface snow in primo conditions! The New Pow depth was 35 cm.

Below a video of the skiing at Top of The World and Almost Top of the World. Keep an eye for avalanches track at the sides of the ski runs.


The day started as a blue bird day, no wind, cold, ... just perfect. The next two pictures correspond to very first meadow encountered when skinning up from the first pull-out after Mores Creek Summit snowmobile parking area. Notice the outline of the slab (partially covered by new snow) that avalanched last Saturday (Jan 21st). 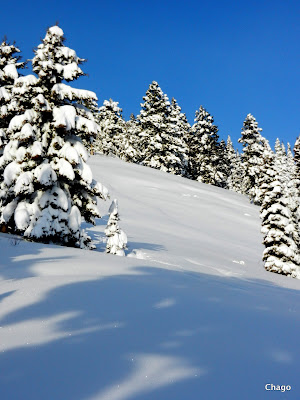 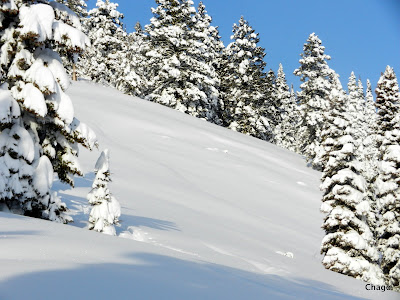 The slope angle for this slope measured 31 degrees! A picture looking down, above the fracture line is shown below. 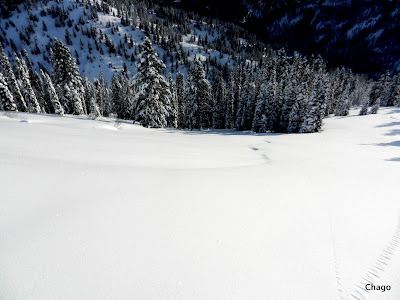 This last avalanche cycle affected many slopes where  I would have either expected avalanches to occur higher in the slope, or slopes with 30-34 degrees to be anchored by the heavy brush of Mores Creek Area. Predictably, slopes steeper than 35 degrees avalanched, but MANY slopes in the 30-33 degree range also slided, and crown fractures were sometime found midslope, just as the slope from the pictures above.

The most impressive slide was at Top of The World (or Round the World). This avalanche ran 1300 feet in vertical. In fact the debris field filled and covered all of the gullies at the very bottom of this run and stopped below the elevation at the bottom of "Almost Top of The World" ski run.

I skied to the bottom of the avalanche debris field in complete disbelief ... it ran beyond the alpha angle of 18 degrees, and the extent and size of the debris toe has completely filled the complex gullies. There were trees and brush that were uprooted and have make this ski run longer!

I am going to be conservative and classify this avi as a D3.5R5 - but if you stand at the bottom of the debris field it was obvios that a rail car would have been destroyed (D4). But D4 are NOT suppose to happen at Mores Creek Summit! This most be a 1:20 year event. This winter is my 20 year skiing this area, and I have never seen anything like this at Mores Creek Summit.

We skied two runs at both flanks of the Top of the World Avalanche. The starting zone average angle was 31 degrees, with a steep sections measuring 33 degrees. There is a steeper line with a rollover at 34 degrees above the fracture crown that was not pulled by the avalanche. I typically do my snowpit above this rollover, and was surprised that this avalanche broke lower in the slope than I expected.


There many other significant avalanches from Saturday cycle at the Knob, Almost Top the World (4 avalanches in that area alone), The Lower glades (2 avis), and the eastern flank from the baldy spot we descend to ski the Knob Ridge. This last avalanche was D2.5-3! Just CRAZY!

The new snow at Sunny aspects (NEE, E, SE, ...) had a delicate layer of surface hoar (SH). Please keep an eye on it in case is not destroyed by the new snow predicted by Wednesday. Although, as we skied out yesterday, there was a deposition of 1-2 cm of new snow that most likely already covered this delicate layer of SH. Furthermore, below the snow surface, there is a low density (very skiable) layer of Near Surface Facets called Diurnal recrystallized snow formed by the relatively mild days and cold nights.

I would not trust the avalanche paths once they get a new slab formed. The bed surface was a pencil hard and capped by a slippery and delicate layer of facets.


Thus, for the next storm cycle it is important to track the SH and NSF at the aspects that get some sun. The deep north should be approached with deep suspicion due to the deep instability (buried depth hoar - DH).

Also - and hate to do this - keep an eye on the rain crust layer buried 35 cm down. Between 7000-8000 feet, this layer has formed a well develop layer of large facets. This layer is easy to detect. Testing of it produced CTMQ3 results. A temperature gradient it is still present, thus it might go from a Q3 to Q2. Performing a loaded column test (simulates a storm by loading column with a block of snow) did not changed compression test (CT) test results. Extended Column test did not showed propagation propensity for this layer either.

Posted by Chago Rodriguez at 6:32 AM