The story for MCS continues to be the same;

Below I included for illustrative purposes the snow pit profiles for December 25 at Pilot Peak and for Sunset Peak yesterday (January 2). With the exception of the surface crust developed last week and the densification of the top slab, both profiles are remarkably similar for two locations, particularly when the two snowpit locations are several miles apart and with somewhat different aspects. The first snow pit profile corresponds to Sunset Peak recorded yesterday, and the second to Pilot Peak last Christmas day. 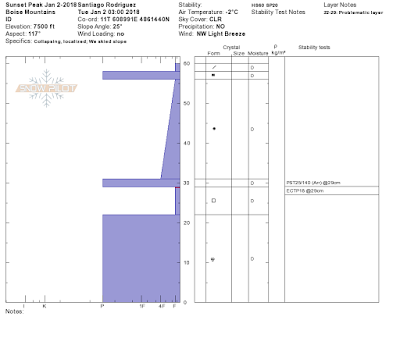 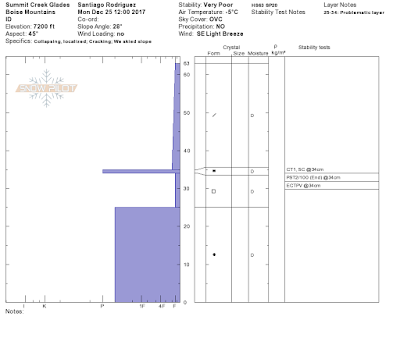 
SunsetJan2_2018 from Santiago Rodriguez on Vimeo.


We also experienced a significant slopewise collapse at the same slope we conducted the stability test. 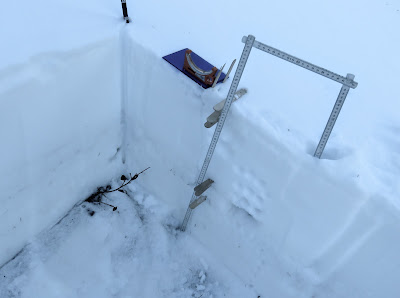 Next a picture of the lookout at Sunset Peak. My hope is that the picture motivates the reader to make a trip over to the lookout. 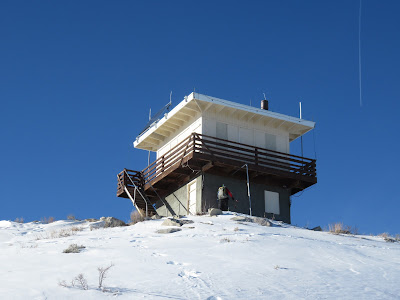 Yesterday we were delighted with Sunset Peak views. The next picture is from the Sunset Lookout looking Southeast. Steel Mountain, in the Eastern Boise Mountains, can be seen in the background. 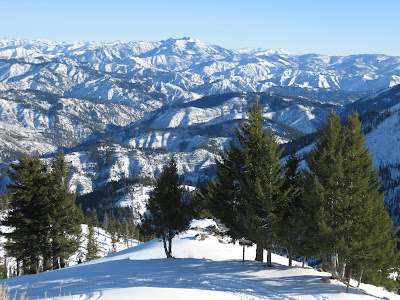 The next picture looks west from Sunset Lookout. Freeman Peak covers most of the view. Freeman has two drainages facing East, and they cover a large area filled with fabulous skiing. To the South is the 12-mile creek drainage and to the North is Mores creek (north) drainage with Pilot Peak road north of it. 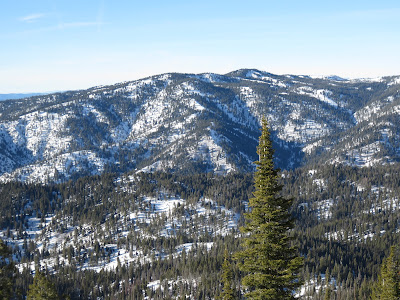 At the end of the day, we were rewarded by a phenomenal sunset after ski touring Sunset Peak! :) 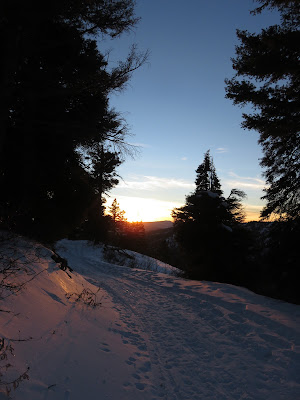 
PilotPeakDec31_2017 from Santiago Rodriguez on Vimeo.

As an avalanche educator, I understand the challenges of trusting stability test results. The secret is in the doing. It is about getting used to completing two CTs, and ECT in less than 15 minutes (including digging). And it is about learning that stability tests are not the only piece of data - That way the pressure is off. When you are doing tests early in the season you are getting a fundamental understanding (and feeling) of how the snowpack evolves. Doing snow pits is like taking the "vital signs", it seems boring at first, you do it when the patient is not sick, but then, the value is when the vital signs change and you are able to recognize that something is "not right"!

And it gets easier to integrate weather, temps, wind, and precipitation to anticipate avalanche type and trigger likelihoods. And you will be surprised that as the winter progresses you are actually doing fewer stability tests and relying more on other observations. In the spirit of encouraging the blog readers to play (yes play) with snowpits, I include one more video with the stability tests performed last December 31st.


StabilityTestsPilotDec31_2017 from Santiago Rodriguez on Vimeo.

Finally - I wish to this blog reader, the most wonderful NEW YEAR!

Posted by Chago Rodriguez at 4:59 PM