Gorgeous views from any high point at Banner Summit Sunday December 11 was the rule. Most high peaks from surrounding ranges could be easily identified.


The skiing off the 8995 feet high point in the Cape Horn "horse-shoe shaped" ridge, just across I21 and North-west of Copper (8965 feet) was phenomenal.
The snow surface at East facing slopes was soft and creamy. It only took telepathy to execute turns on such high quality "hero" snow. And the massive amounts of near-surface facets had a healthy "frosting" of "surface hoar"! 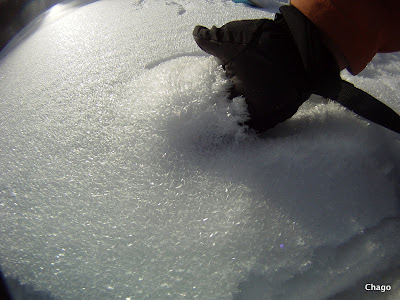 As we discussed in a previous posting it is always a good practice to plan a tour. The map illustrates the ridge we used for the skin up, and the intended ski lines. 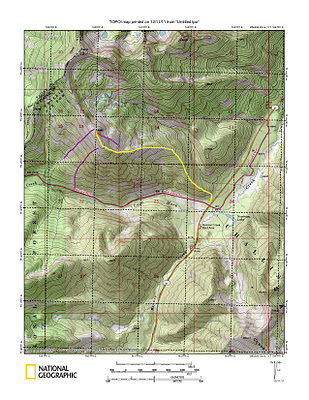 We decided not to ski the SSW lines denoted by purple lines, and stick with the NE and E aspects. The skiing was "way too good" to gamble with a melt freeze crust at south aspects.

We started the tour by listing the snowpack concerns in our Blue Books (Snow, Avalanche, Weather, Observation Journal):
At 8700 feet we identified a very hard windslab in a steep north looking slope. This thick slab was sitting in top of facets, and it was spooky with its drum like sound and dark appearance (shaded due to winter low angle of the sun). This slab very likely was the result of the strong North winds a week ago. A snow pit 30 meters away but at a less steep slope (34 Degree) and on a spinal ridge facing East produce a snowpit the following elements:
It is easy to recognize that a slab (hardness of 4F) is sitting in top of a weak layer of DH (hardness of F). Also, that the snowpack is shallow with a depth of 50 cm!

I felt it was appropriate at this time not to chart the profiles and temps, but to show that charts are not a pre-requisite for understanding the data, and the purpose of this write-up is to assit folks in making sense of the data that can easily be collected in the field.

Stability tests at the East 8700 feet slope with 34 degree slope produced the following results:
In a previous blog posting we discussed the Stability Quadrants. The above data can be summarized in the following format:
Even when the stability tests failed to find "instabilities" and could provide some comfort, the snowpack in our area is thin and very variable. It only takes some old patch of early snow to be buried below the facets to provide the much needed missing component to change test results. Or the formatin of heavy and hard windslabs in steep terrain, such as the one we found. I also still remember last week, when at Angel Basin (Anthony Lakes-Oregon) I found a similar snowpack with PST 40/100 End results, suggesting a high likelihood of propagation potential (propagation when less than 50% of full length is cut). The only difference is that the November snow was deposited above an isolated patch of October snow.

Since the snowpack is thin, it was very easy to check if the structure of the snowpack was changing as we skied. In addition we avoided the deep north steep slopes with windslab!

Posted by Chago Rodriguez at 6:46 AM